Drizly is launching in its first international market today, as the Boston-based startup expands its on-demand booze delivery service to Canada. 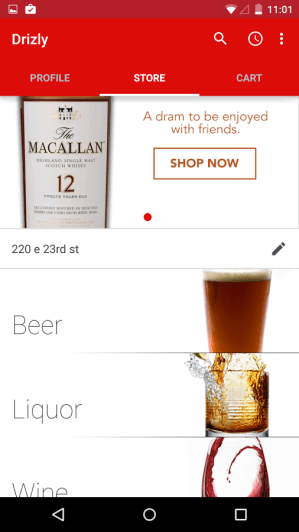 Above: Drizly for Android

Founded in 2012, Drizly lets you search for and order beer, wine, and spirits to your door within the hour, using nothing but your smartphone. It’s currently available in almost 20 markets across the U.S., and its move across the border into Canada, while a relatively minor maneuver on the surface, is a potent symbolic move nonetheless.

Drizly’s expansion into Edmonton, Alberta, comes as a result of a tie-up with Liquor Stores N.A. (LSNA), one of North America’s biggest liquor retailers and the parent company of Liquor Depot.

“This partnership marks a major milestone in our company’s young history and we look forward to making this service available to Edmonton residents — especially in these colder months,” explained Nick Rellas, CEO and cofounder of Drizly. In other words, people like to get drunk when it’s cold outside.

Today’s news comes just a few hours after New York-based Thirstie acquired DrinkFly to bring a little consolidation to an increasingly fragmented market, with the likes of Minibar, Flaviar, BrewDrop, Ultra, Swill, Sqyre, and Saucey all vying for your hard-earned booze dollars. This is before we mention the likes of Amazon, Postmates, and Instacart, which also offer alcohol delivery services as part of their broader offerings.

Drizly isn’t the first on-demand alcohol service to expand internationally, as Thirstie launched in Canada last October, kicking off with Toronto and Ottawa. But Drizly has claimed almost $18 million in funding — among the highest of its many peers in the space — so it’s a notable move from the U.S. company.

Rellas also confirmed to VentureBeat that Drizly has been in discussions with retailers and regulators in additional countries, though there is no timescale on when further international launches may happen.