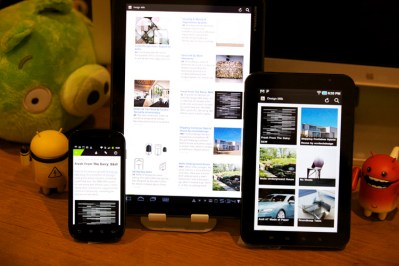 News reading service Feedly is showing off just how useful HTML5 can be for creating powerful cross-platform applications today with the launch of Feedly Mobile 2.0 for the iPhone, iPad, and Android phones and tablets.

Feedly’s apps are native to iOS and Android, so they also serve as a prime example of how HTML5 and native apps can coexist, as well as how the battle between the two may be a non-issue.

The new apps — available on the iTunes App Store and Android Market — use an HTML5 framework developed by Feedly called “Streets,” which allow all of the apps to run the very same code across Android and iOS. It also makes the apps fully adaptable to a variety of screen sizes, making it perfect for smartphones and tablets. Thanks to Streets, Feedly says you’ll have a consistent experience with the app across all platforms, as well as on a computer.

If you’re not familiar with Feedly, you can think of it as a curated look at your RSS and Twitter feeds. Feedly’s editorial algorithm determines the stories you’d like the best and displays them on your home screen, but you can also easily dive into full feeds if you need to. Feedly is a balance between a full-blown news reading app and something that’s more focused on a magazine-like interface such as Flipboard.

In my brief testing of the app on the iPad, I found Feedly to be among the fastest news reading apps I’ve seen. Notably, it’s much faster to load and navigate between feeds than Flipboard, and it also has the added advantage of synchronizing across the iPhone and iPad. I can already see Feedly being more useful to me for that fact alone. Flipboard, on the other hand, has always struck me as something that aims for style over productivity.

The new Feedly apps are also twice as fast as the previous version (both in startup and swiping between feeds), offer instant search, higher quality images, as well as a record of articles you’ve previously read.

Feedly is based in San Francisco, Calif., and is fully self-funded.