Findo, an artificial intelligence (A.I.) startup that’s setting out to help people find information buried in documents, files, email attachments, and more, has announced a $3 million funding round from Flint Capital, with an additional $1 million expected from a handful of “well-known” Silicon Valley angel investors.

The news comes six weeks after the company announced a $3 million seed funding round from Russian language-based document recognition software giant Abbyy, an announcement that coincided with the launch of Findo’s new product.

In a nutshell, Findo is an intelligent assistant currently available for iPhone and the web, with more platforms to follow in the coming months. The apps make it easier for users to search locally stored files or connect their cloud-based accounts from Facebook, Dropbox, Google Drive, Evernote, Box, Gmail, Exchange, Outlook, and others, to unearth information — even if they can only remember vague details. While it will work with traditional keyword searches, it also promises natural language processing (NLP) smarts, meaning users will be able to searching using terms such as: “phone number of that guy I met in London” or “Word document sent by Bob last Monday.” There are also accompanying Findo search bots that integrate with Slack, Telegram, Facebook Messenger, and Skype.

The product, as it stands, is technically a beta iteration, but in time the company says users will be able to search based on the content within audio and image files too.

Alongside today’s funding news, the company has lifted the lid on a new feature called Predictive Insights, which is designed to “solve information overload,” or “infobesity,” as the company more succinctly puts it. In short, this new feature serves to “remind” users of a time-sensitive task that’s been sent to them by email which they may have overlooked. Findo will identify that a request has been made by someone important by “ranking” your contacts, and identifies requests made within those emails (e.g. “finish that report by next Friday”) that have not yet been replied to. Findo will automatically send an alert to Slack, Facebook Messenger, or Skype when it’s time. 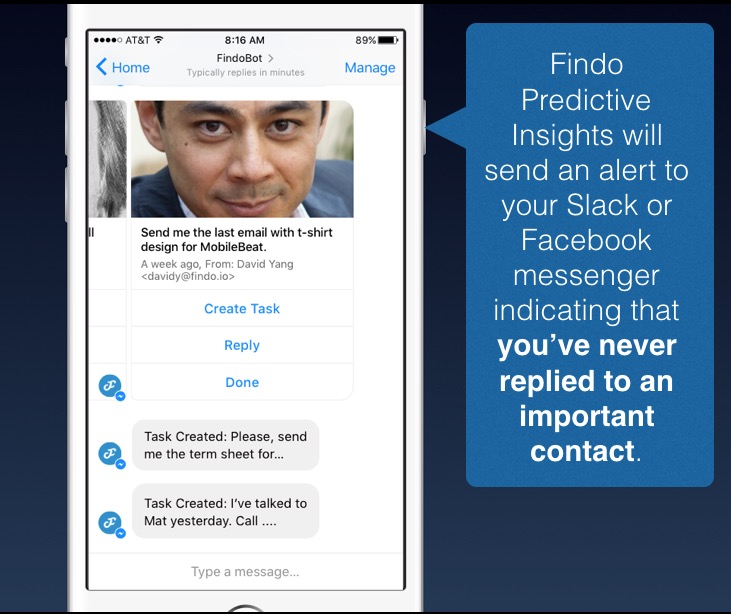 Though the feature only works within email for now, we’re told that it will work within Slack soon too.

“The world is changing, and, with the addition of Predictive Insights, we are positioned to solve a problem that no one else has solved,” said cofounder and CEO Gary Fowler. “Findo is quickly evolving into a smart search assistant that can be used in a number of different ways to stop infobesity.”

Cofounded by Fowler and Dr. David Yang, the Russian entrepreneur behind Abbyy, the company now claims a team of around 20 at its Menlo Park headquarters, and it also has some notable people involved behind the scenes. These include Bill Reichert, from Garage Technology Ventures, who serves as an advisor and board member, and Apple’s former chief security officer, Rick Orloff, who sits on the board.

“This next round of funding, combined with our powerful technology, allows us to continue to lead the next revolution solving the growing problem of infobesity,” said Yang. “Our estimates show that, for some 300 million people, searches are failing at a high rate, and people are unable to keep track of information because they are inundated.”