The problem facing many mobile application developers is that they don’t get the best analytics information on the cross-platform software they create.

That’s why San Francisco-based Flurry has launched a new mobile application analytics tool that works across a variety of mobile platforms, including the iPhone and Google’s Android. Today, the company is announcing that more than 300 developers have used its free service since the beta launched in October. 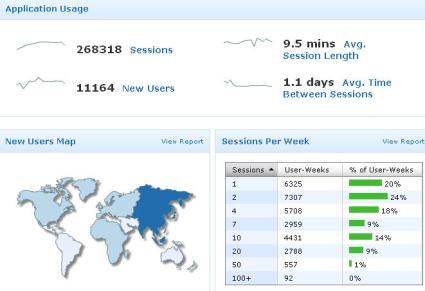 The analytics also work with the The program also works with BlackBerry and Java ME platforms (though not Palm). Flurry lets developers see exactly how consumers use their applications, and provides information on which features of the application are used and for how long.

The software is meant to give developers a tool for monitoring application usage in real time. That way, they can fine-tune the application on the fly, said Peter Farago, vice president of marketing at Flurry.

Flurry was founded in 2005 to let users access email via their cell phones for free. It supported a variety of email systems, including Yahoo Mail, Google’s Gmail, MSN and others. That mobile client has been downloaded more than three million times. The technology worked across more than 1,200 handsets. That core technology set down the roots of the analytics business.

The software could detect what sort of handset was being used, and it would download the right set of software components so that the email application would work.  The software on the phone would report back to Flurry whether the application was working properly. When Apple launched its AppStore, the analytics information was lacking. Third party developers could find out how many apps were downloaded, but little else. So Flurry rewrote its software as an analytics tool. It isn’t currently promoting the email service.

But it isn’t alone in the space. Rivals include Pinch Media and Medialets, both of whom make money via ad insertion. Another is AdMob. Flurry plans to make money by charging for a premium service and some other unannounced services to help developers drive app upgrade transactions. It may also launch its own ad insertion service.

Flurry’s current chief executive, Simon Khalaf, joined the company in September. Founder Sean Byrnes stayed on as chief technology officer. Backers include Draper Fisher Jurvetson and Draper Richards. To date, the company has raised $4 million and is not currently raising a round. It has 10 employees.