European food delivery startup Deliveroo has today unveiled a new platform that enables restaurants of all sizes to open in new locations without committing to costly public premises.

With Deliveroo Editions, the London-headquartered company is putting its arsenal of delivery data to use through identifying customer demand and specific cuisine shortages in certain areas — it’s about spotting gaps in the market. Deliveroo then asks eateries, be they small independents or national chains, to sign up to its new kitchen-only delivery platform, though restaurants can also register their interest in being selected.

For restaurants looking to expand, this setup reduces the risk of setting up shop in expensive neighborhoods, with only the actual catering side of things to worry about. Deliveroo provides everything else in terms of infrastructure, including bespoke kitchens, local marketing support, software, and fleets of couriers. 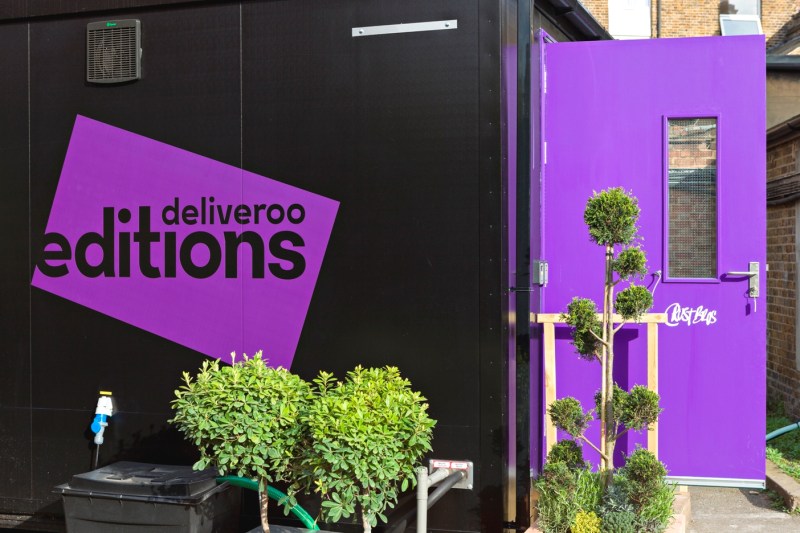 Founded out of London in 2013 by William Shu and Greg Orlowski, Deliveroo differs from other food-delivery aggregators such as GrubHub and Just Eat, insofar as it leans toward the “premium” end of the culinary spectrum; many of the eateries on board haven’t traditionally offered takeaway or food delivery services. The company also provides the transport and ordering infrastructure, providing its own drivers and cyclists to deliver food.

Deliveroo has raised almost $500 million in funding since its inception, including a chunky $275 million round last summer, and has long expanded beyond the U.K. into 12 countries, including Australia, France, Germany, Hong Kong, Singapore, Spain, and the United Arab Emirates.

When it made its previous funding announcement in August, Deliveroo also teased a brand new service then called RooBox, which it said “gives restaurants access to delivery-only kitchens in key locations, accelerating geographic expansion.” That served as the seed for the official launch of Deliveroo Editions today. Following a handful of trials across London, the platform is now being opened up to restaurants across the U.K. — 200 in 30 locations — with an international expansion to follow shortly. It’s also worth noting here that each location, or “site” for want of a better word, may contain multiple kitchens from various brands, such as a burger chain, a pizza outlet, and an Indian kitchen.

“Deliveroo Editions makes good on our promise to widen access to the world’s best food,” explained Deliveroo CEO Shu. “By partnering with some of the top restaurants in the business — from unique independents to high-street favorites — we’re ensuring people have access to incredible food on demand.”

“This is the biggest development in the market since Deliveroo first launched,” he continued.

In terms of costs to the restaurants — well, it really depends. During a conversation with VentureBeat in London earlier today, Shu said that they work with the eateries to figure out their financial objectives and agree upon a commercial structure. For example, a restaurant may be more interested in Deliveroo’s backend smarts and drivers, in which case they might pay for their own kitchen. Or they may not have sufficient funds for anything, and therefore Deliveroo would fund everything up front. Whatever is agreed will ultimately affect the commission paid for each delivery.

While there are many parts of Deliveroo Editions that make sense, would it not be just as easy to operate as a takeaway in some instances? After all, if I live down the block from a kitchen, it’s a little silly having someone drive over with my order. The company says there are no current plans to offer takeaways, but as with all things in life, anything’s possible in the future.

It’s an interesting venture from Deliveroo, and it serves as an easy way to drive its own revenues. While many eating establishments may be careful about expanding too quickly, Deliveroo is effectively encouraging restaurants to take the plunge through baby steps — rather than going all-in on a swanky new High Street outlet, they can invest in a small kitchen in a nondescript building in a back alley.

It also follows a model we’ve seen elsewhere in the technology realm. For example, payments platform Square’s core business is about helping merchants accept card payments through a simple smartphone or tablet, but its own growth is hamstrung by merchants’ revenues. That is why it introduced Square Capital, providing loans to small businesses so they can grow which, in turn, means more revenues for Square itself.

And that is essentially what Deliveroo is now doing for food delivery. It’s encouraging small businesses to expand, which will mean more commission on food orders for Deliveroo.