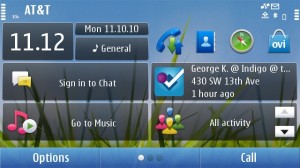 Popular mobile check-in game Foursquare today announced on its blog that is has launched a Symbian version of its location-based game. Symbian is one of Nokia’s mobile operating systems for mobile devices and low-end smartphones.

Foursquare claims to have been working with Nokia for several months and says the new version will have all the bells and whistles of other operating systems, including a home screen widget that will show the most recent friend check-ins (see image).

Though only officially announced today, the app was made available two weeks ago, and Foursquare notes that it continues to grow in popularity on the Ovi store — Nokia’s application store. It appears the app is in the top 30 applications. Nokia is one of the largest makers of handsets and could potentially open the door to millions more Foursquare users worldwide.

Foursquare has had a rollercoaster few weeks, including a downtime of more than 11 hours because of overloaded shards, a technical term for a portion of a distributed database. The company also recently announced that its new Foursquare 2.0 is available for Android, as first reported by Mashable.

There is no shortage of similar location-based apps on the Ovi store. GyPSii, a location-based social network for finding and connecting with friends, and Mobnotes, a network of locations and tips for friends are some of the other offerings.

The Foursquare app will work with a 3.2, 5.0, or ^3 based Nokia smartphone, according to the company.