Google today is introducing four pieces of technology — including an Android for Work app, a Google Play for Work business-oriented app store, and new apps that support common productivity tools — that should enable people to use their Android devices to do work.

Google is also coming out with Work Profiles for Android devices that will enable people to find work-oriented apps in a segregated spot just above apps for personal use in the standard Android user interface.

Google first announced Android for Work at the company’s Google I/O conference in June. Today’s news amounts to “effectively the GA [general availability] of what we announced at I/O,” Rajen Sheth, head of product management for Android and Chrome for Work, told reporters at a press event at Google’s San Francisco office. But Google isn’t stopping here.

“We expect that what this is going to do is start to bring many more companies toward Android — not just make Android a player in the space, but actually change and redefine the concept of mobility at work,” Sheth said.

Google, of course, is looping in a bunch of hardware providers in this initiative, like HTC, Lenovo, LG, Motorola, Samsung, and Sony. After all, Google does work with a large team of hardware vendors, unlike, say Apple — even as it, too, is keen to get more iOS devices inside enterprises, if Apple’s partnership with IBM is any indicator. The news today also shows Google’s challenge to Microsoft, which has enterprise credibility but a lower position than Google or Apple when it comes to mobile devices.

Meanwhile, the move, following Google’s acquisition last year of bring-your-own-device startup Divide, is a fascinating one from the perspective of the mobile device management market, where there have been a few prominent acquisitions. Google isn’t competing, per se, but rather partnering — with IBM’s Maas360, VMware’s AirWatch, Citrix, MobileIron, SAP, and Blackberry, among others.

“What it’s done is broadened the range of devices that they can manage,” Sheth said. “It’s a very good but narrow set of devices [that they could] manage before. This broadens it to every Android device.” 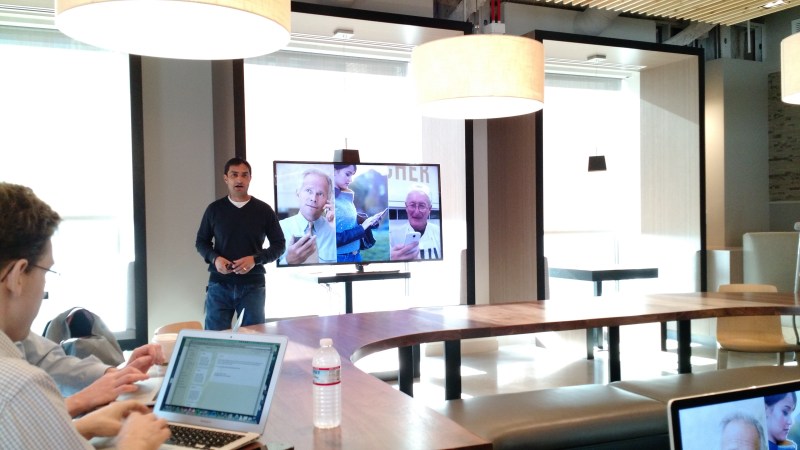 Above: Googler Rajen Sheth talks about Android for Work at a press event at Google’s San Francisco office on Feb. 25.

And while Google has no problem building applications, the company is bringing in software partners, including Adobe, Box, Salesforce.com, and SAP — to ensure a vibrant ecosystem. And Android for Work inherently acknowledges that many workers already use non-Google applications for email, calendars, and task management — the system supports Microsoft Exchange. So if you use Google’s new Work Tasks app, for instance, you can see tasks stored inside of other applications. The same goes for the new Work Contacts, Work Calendar, and Work Mail apps.

Oh, and you admins can even bulk-purchase apps for your employees, Sheth said.

There’s been a lot of demand for these sorts of Android tools, he said. Dozens of companies are now using them, he said, including Guardian Life, Pearson, and Woolworths Unlimited.