Google is introducing some nifty new smarts to its Photos app today, ones designed to take the pain out of managing the hundreds or thousands of snaps that lie dormant on your device. 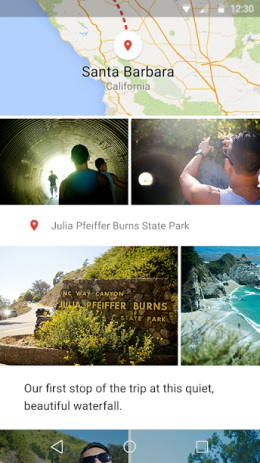 Kicking off from today on Android, the Web, and iOS, Google Photos can now curate what it deems to be your best photos and suggest new albums accordingly. It does this partly using location data — so it will assume that photos taken roughly around the same time and place represent part of the same event and thus will make sense to put them into the same digital album. But more than that, it will also put its computer vision skills to the test and try to assess which ones are the best from the original collection.

The album will also include maps to show where a photo was taken, and if it’s a road trip, say, it will show how far you’ve traveled between destinations. You’ll also be able to add captions to the snaps and give the album a title. Back in December, Google also announced a new collaborative feature that lets anyone add photos and videos to the same pool — this feature will also work with these new albums.

The new smart album feature isn’t entirely a new concept — Israeli photo-management startup MyRoll has offered something similar for a while through its eponymous app as well as a standalone service called Gallery Doctor. It was always my hunch that MyRoll felt more like a feature than a standalone app and would be acquired by a bigger company at some point —  Google was top of my list of potential suitors, but in the end MyRoll was acquired by security software giant AVG late last year.

So while the new Google Photos app does bear some resemblance to existing apps, with maps and location-focused features thrown into the mix, the Internet giant is putting enough of its own spin on the concept to make this worth checking out.