HP has come out with a refreshed 15.6-inch Spectre x360 laptop, one with speed and performance that essentially replaces the desktop and will appeal to any creator. With a retail price of $1,500, the 2017 edition certainly delivers, with a quality entertainment center and a touch surface to let your imagination go wild.

Getting to know the 2017 Spectre

Above: The HP Spectre x360 15-inch laptop is thin and powerful.

The 15.6-inch Spectre isn’t bulky — it has a thickness of 0.7 inches and weighs in at 4.42 pounds. By itself, that’s not bad, but the 2017 edition is 0.07 inches thicker and 1.22 pounds heavier than its predecessor. This laptop is no brick, but it does have some weight to it, and I could feel it when lugging it around in my backpack to and from the office.

This isn’t a device that you’d want to carry around like a MacBook Air — it certainly isn’t suitable for airplane usage, because it’s so big. But that’s not why HP made this laptop; it’s something that really stands out at the home or office. Just like with the MacBook Pro and the Microsoft Surface Book, the HP Spectre is a premium quality device, not only internally but externally as well.

With an aluminum chassis and a black (“ash silver”) and gold finish, the HP Spectre has a polished look that could be well received by creative professionals. It’s a change from last year’s model, which was only available in HP’s “natural silver” color.

The keyboard is massive, and there’s no mistaking where the keys are — they take up nearly the entire width of the computer. Typing felt normal, with one exception: You have to account for the fact that on the very end is a column featuring the home, page up, page down, and end buttons that can throw off your typing. Much of this review was typed on the HP Spectre, and the keyboard felt very comfortable to use. There’s 1.5mm of travel and enough space between keys to make it easy to type out a script, email, or document without any problems.

HP provides a backlit keyboard, but you can’t toggle the lighting levels — it’s either on or off.

The trackpad on the 15.6-inch HP Spectre is wide enough that no matter where your hands are on the keyboard, you’ll be able to easily control the cursor. There were times when the cursor would coast randomly across the screen for no apparent reason, an issue that I’ve experienced on at least one other HP laptop. However, when you’re actively steering the cursor with the trackpad, you can still browse the web, use multi-finger gestures to scroll, and move things around. 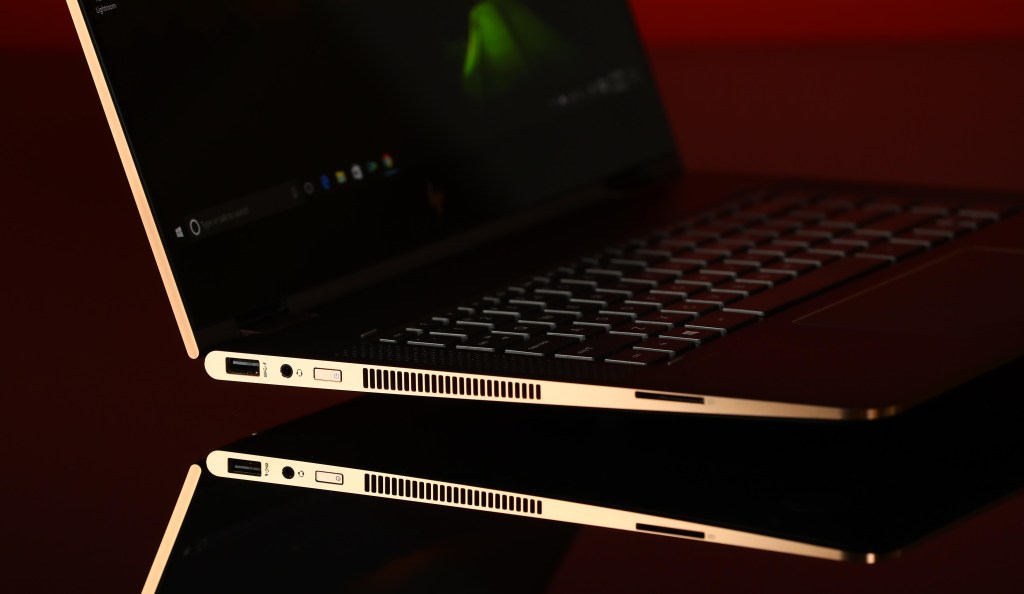 HP has once again used Bang & Olufsen audio technology in its laptop, with quad speakers, two more than its predecessor. It matches the update the company made with its 13-inch model last year, and the sound quality is pretty good. While there are audio controls on the display and the keyboard, there are also volume controls along the right-hand side of the computer, which come in handy when in tablet mode.

As for battery life, HP boasts that its latest Spectre laptop contains a larger lithium-ion battery with six cells and 79.2Wh that HP says will last up to 13 hours. It supports fast charging and, the company claims, will achieve 50 percent capacity within 30 minutes. After I drained the battery and then charged it, this wasn’t quite the case — it took a few minutes longer to reach the 50 percent mark. But that’s not a deal-breaker.

When the battery was fully charged and I used the HP Spectre unplugged, the computer lasted at least nine hours with normal usage such as browsing the internet, writing articles, checking emails, listening to Spotify, having a Google Hangouts video call, and watching YouTube. During my time with the HP Spectre, I have not experienced any issue where the bottom of the device becomes too hot or the fans begin to whirl audibly.

When making a video call, HP’s Bang & Olufsen audio app has a noise cancellation option that lets people you’re talking to hear only you or multiple people around you. Where this comes in handy is largely determined by the environment you’re in — if you’re in a Starbucks or a loud co-working space, for example, having HP noise cancellation set to only pick up your voice would be helpful. But if you’re in a group chat with others next to you, being able to pick up multiple voices will help.

The problem with this is that HP has buried this feature in an app most people probably won’t readily know where to find — you have to find the HP Audio Switch in the taskbar, select “Bang & Olufsen Audio Control”, and then the “Input” section in the app. It would be great to have this option within the volume control, or at least a link to it.

The Spectre’s camera is decent, with a 1080p resolution. It’s suitable for selfie photos and amateur videos, but if you want better quality, invest in a camera. 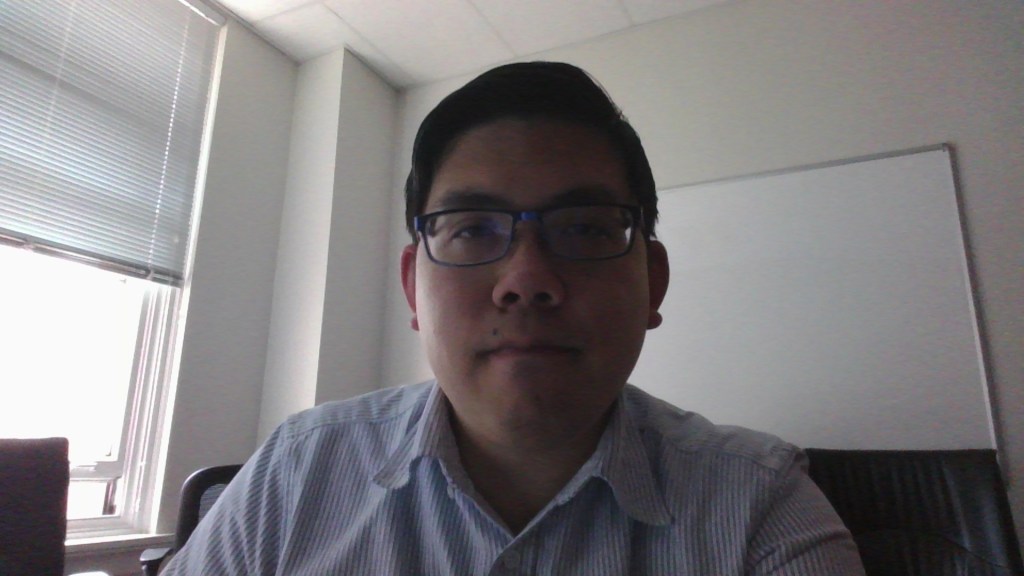 HP has also equipped this premium laptop with Orbit, its app that lets you share files between the computer and mobile devices. This can be helpful, especially if you take a video on your iPhone or Android device and want to broadcast that onto a larger screen — HP Orbit can let you impress your friends with the quality display of the HP Spectre.

Speaking of the display, perhaps what impressed me the most about the 2017 15.6-inch HP Spectre is the display, which provides an immersive experience no matter whether you’re playing a game, watching a video, having a video call, designing, or simply using a web browser.

HP claimed that feedback it received from the previous version was a request for a higher-resolution display. The 2017 model not only supports 4K at a 3840×2160 resolution (compared to last year’s full high-definition 1920×1080 or quad high-definition 2560×1440 resolution), but it also includes a narrow border display so your experience isn’t cut off by the borders of the laptop. At times, I felt it was like watching a widescreen version of a movie — it really draws you in. 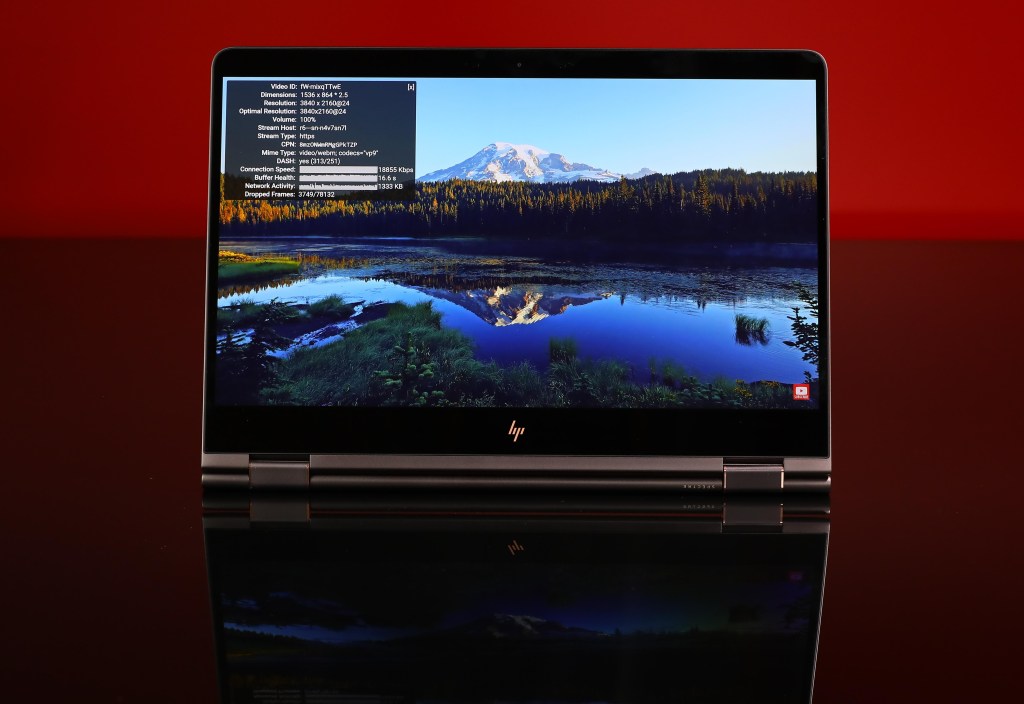 Having a micro-edge display with 4.65 millimeters on both sides provides additional screen real estate for those who want a larger canvas to draw on using the HP stylus or who just want more space to be better organized. HP claimed in a survey it commissioned that the majority of people who prefer a 15-inch display want a high-resolution display with thin bezels.

Because it’s a convertible tablet, you can position the HP Spectre in several ways: as a traditional laptop, as a tablet, in tent mode, and any other way you deem appropriate. This is helpful when you want to watch your favorite movie or show from Netflix, Hulu, or Amazon and don’t like having a keyboard between you and the screen.

An issue I had with the touch display is how easy it was to get fingerprint smudges on the screen, causing me to constantly having to wipe it down. One thing that helped was the use of the HP stylus that comes with the laptop.

The stylus isn’t a small S-Pen that you’d have with a Samsung device, but the equivalent of a pen or pencil that an artist would use to draw their masterpiece. There’s some weight to the stylus, and it’s built in a way you don’t worry about it snapping in half.

One qualm is that it requires AAAA batteries — it was an adventure to find a store that had them in stock. But that aside, if you want more control over your on-screen creativity, be it using Photoshop, Illustrator, or Adobe Premiere, than a mouse can provide, the stylus should work for you, especially when you’re using the Spectre in tablet mode.

On the body of the stylus are two buttons, the equivalent of the left and right buttons on a mouse. The HP Spectre includes an app that lets you modify the purpose of each button to suit your workflow. What I appreciated about the Samsung’s S-Pen is that there was a launcher constantly on screen that you can select to take screenshots, make immediate annotations, and do other things. HP’s stylus requires at least a couple of extra steps. 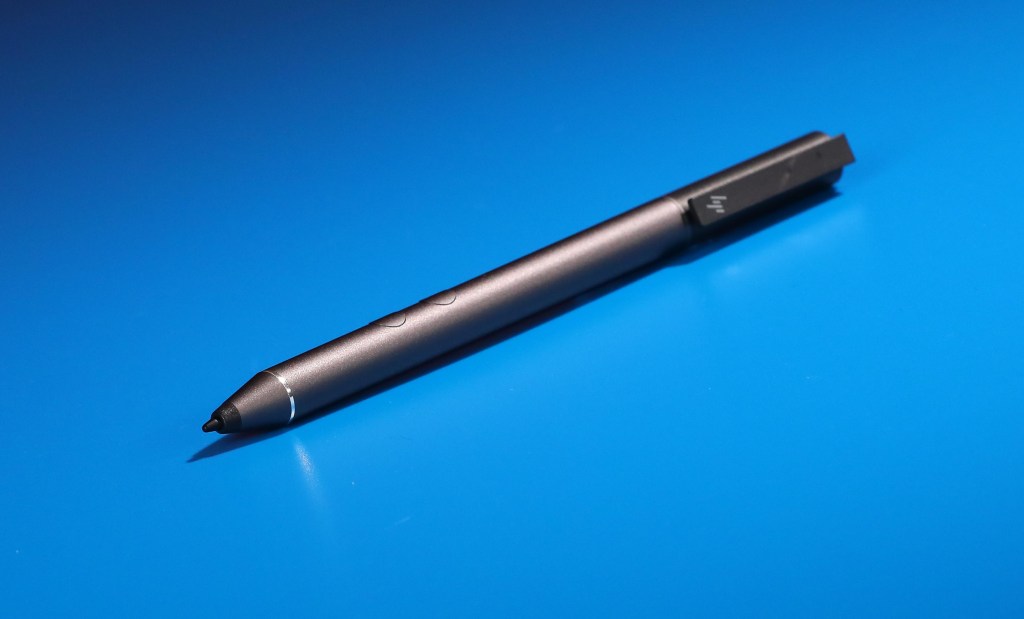 Palm rejection technology on the display lets you rest your hand on the screen without leaving a mark as you use the stylus. However, pressure sensitivity does not appear to be available, so the size of your brush or pencil stroke will be the same no matter how hard you’re pushing the stylus into the screen. 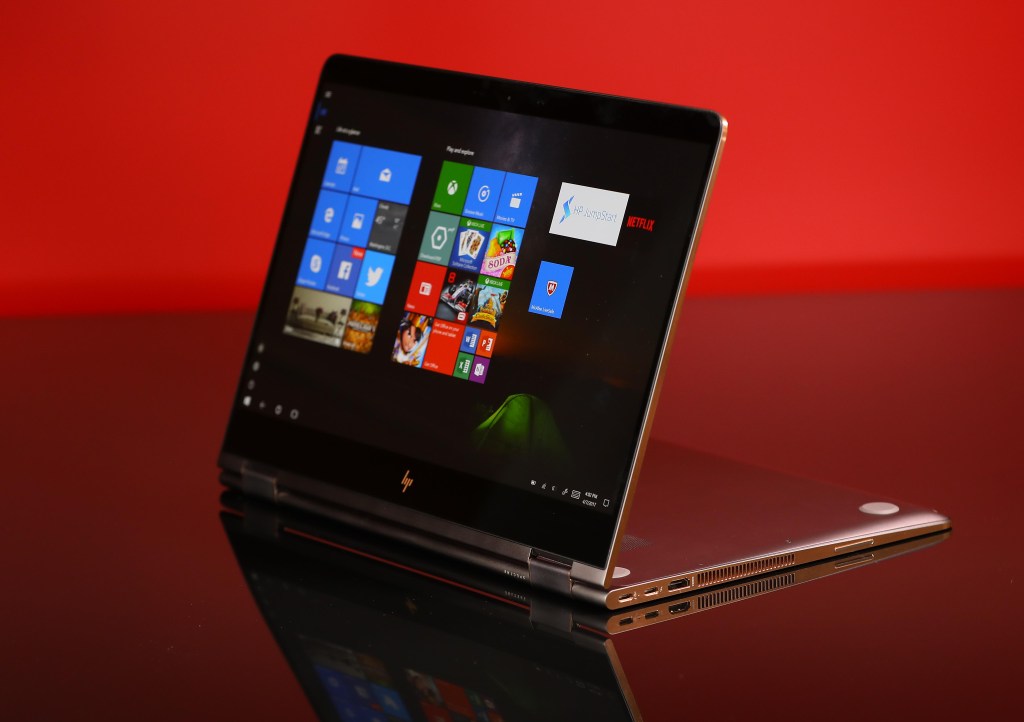 Overall if you’re looking for a quality laptop to replace your desktop or something that you can use in your role as a creative professional, then the HP Spectre 15.6-inch convertible laptop is worth exploring. At a starting price of $1,500, it’s not a cheap device, but, given its capabilities, it should last for quite a few years.

Some of the benefits of having this computer is the 4K display, its audio quality, the battery life, and the performance. The camera could use a bit more work and the stylus could be a bit better, but after weeks of using the HP Spectre, I didn’t find anything that was a deal-breaker.