The smartphone market isn’t looking too hot. In a report published today, research firm International Data Corporation (IDC) said that 375.4 million devices shipped to customers during the fourth quarter of 2018, down 4.9 percent from Q4 2017’s peak — marking the fifth consecutive quarter of decline and closing out the worst year ever for smartphone shipments. Global shipments in 2018 dipped 4.1 percent, with a total of 1.4 billion units shipped for the full year.

China experienced the worst of the slump. The country, which accounts for an estimated 30 percent of the world’s smartphone consumption, reported a decline in shipment volume of 10 percent. IDC blames high inventory and an overall decrease in consumer spending.

Samsung — the top smartphone vendor by volume — ended the holiday quarter with 70.4 million total shipments, a 5.5 percent decline from the 74.5 million it shipped globally in Q4 2017. (It drove the Seoul company’s market share below 20 percent to 18.7 percent, and 2018 shipment volume down 8 percent from 317.7 million units to 292.3 million.) Meanwhile, Apple, which ranks second in the world by volume, saw the volume of iPhone shipments dive 11.5 percent, with total volume dipping 3.2 percent to 208.8 million units from 215.8 million for the full year. 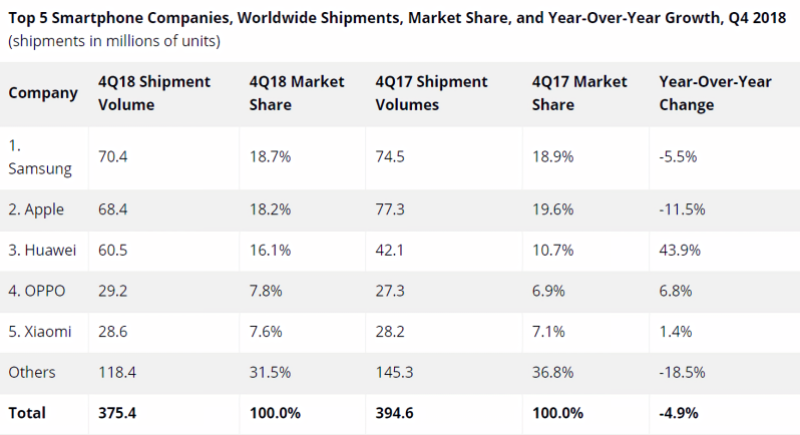 “Globally the smartphone market is a mess right now,” Ryan Reith, program vice president with IDC’s Worldwide Mobile Device Trackers team, said. “Outside of a handful of high-growth markets like India, Indonesia, Korea, and Vietnam, we did not see a lot of positive activity in 2018. We believe several factors are at play here, including lengthening replacement cycles, increasing penetration levels in many large markets, political and economic uncertainty, and growing consumer frustration around continuously rising price points.” 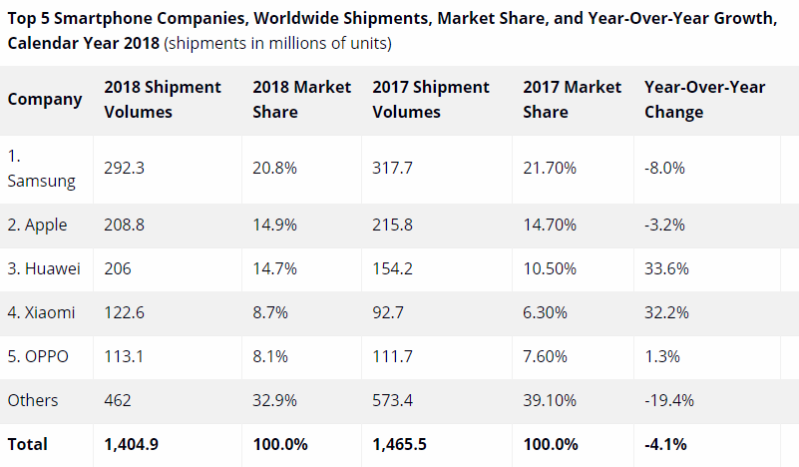 And globally, the top five smartphone companies — that is, Samsung, Apple, Huawei, Oppo, and Xiaomi — consolidated their strength: Their collective shipment volume grew to 69 percent from 63 percent.

IDC’s report follows a similarly gloomy one from Canalys this week. Analysts there estimate that shipments in China last year fell to their lowest level since 2013 — 396 million units — and that fourth-quarter sales alone dropped 15 percent year-on-year. It’s the seventh consecutive quarter of decline, and comes after a 4 percent overall decline in 2017. It mirrored findings from China Academy of Information and Communications Technology (CAICT), a research institute under the country’s Ministry of Industry and Information Technology, which said in January that shipments dipped 15.5 percent to roughly 390 million units for the year, and even more steeply in December.

It’s not all doom and gloom, though. In contrast to China, the Indian market saw extraordinary growth in 2018, with research firm Counterpoint reporting last week that 145.2 million smartphone units shipped in 2018 — a 10 percent year-over-year growth over the 132 million units that shipped in 2017.