Apple makes just enough changes to each iPhone every year to make the upgrade seem compelling. This year, it’s all about wireless charging. But iPhone fans have another tough decision to make: The much improved iPhone X with a more colorful screen debuts in November, so reviewing the iPhone 8 (and iPhone 8 Plus since this is a dual review) is harder than ever. We don’t know whether the iPhone X will offer enough incentives to wait.

That’s why it really comes down to deciding whether wireless charging is the main feature you want, since all three models will offer it.

I tested the iPhone 8 and 8 Plus in multiple environments — in my car, in an office, while watching television at home, and on a long walk. I mainly wanted to find out how the new model is different from the iPhone 7 and iPhone 7 Plus, which I’ve also tested extensively.

When you first open the boxes for the new models, there’s a sense of relief. You don’t need to bother with the Apple Lightning cable or the charger. You can leave them in the box, although they do come in handy as a backup when you don’t have the wireless pad. Wireless charging is not at all new — Mophie has made a wireless charging case for the iPhone for a while, and Samsung has offered this features for years.

However, for longtime iPhone loyalists, wireless charging is a game-changer. After testing all day, I placed the phone on a Mophie Wireless Charging Base that costs $60. That fourteen seconds of time you save — fishing out a cable, unraveling it, and connecting to an outlet — is more important than most of us realize. I never had any issues charging the devices. I even used an Ikea desk that has a wireless charging pad — no problems with overheating or not charging properly.

Several new cars like the Toyota Camry and Audi A8 offer wireless charging — we might see the charging pads at Apple stores and libraries soon. It’s really all about making it much easier to charge up. In many ways, it solves the dilemma of needing to improve battery capacity — if we have charging pads everywhere, who cares? I’d prefer a longer-lasting phone, but if every desk and car can charge this easily, it is not as much of a factor in terms of staying connected all day.

Once you realize that wireless charging is the primary new feature, there are still several other considerations — some are important, some are a bit trivial.

Fortunately, the phones don’t feel slippery. Comparing the 8 Plus to the Samsung Note8, you feel a bit like the Note could easily slide out of your hand, but the 8 Plus has a bit more grip.

Because the new models have a glass back, you might wonder if they will break easily. Fortunately, I never dropped either of the phones. SquareTrade did a durability test and found the new Apple phones are more durable than the Samsung equivalents. But here’s what we know — glass cracks more easily than metal. My view is that the wireless charging is enough of a positive to outweigh the weight increases and slight durability issues.

Let’s start with one of my favorite features on the new iPhones. Portrait Lighting is amazing, if a bit underdeveloped (no pun intended). Stage Light worked great for everyday objects, including the mouse on my desk shown below; the image looked more engaging. In a few cases, the halo around an image — such as this angel ornament — looked a bit cheesy.

At the same time, for most normal photos that don’t rely on the lighting features, there’s a little less pop to the photos on an iPhone 8 and 8 Plus compared to the Note8 (see below). And, importantly, the images below looked much more colorful on the Note8’s screen. 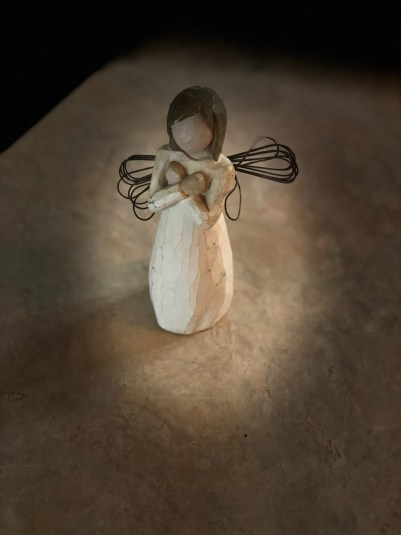 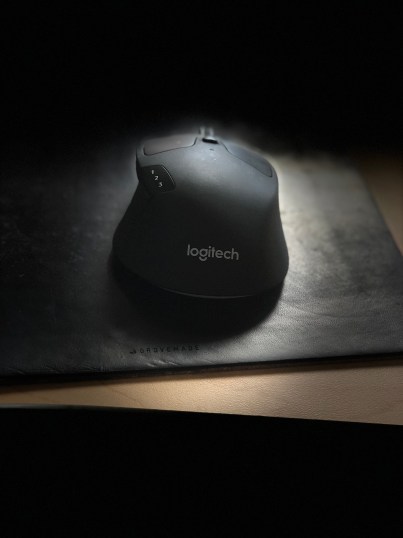 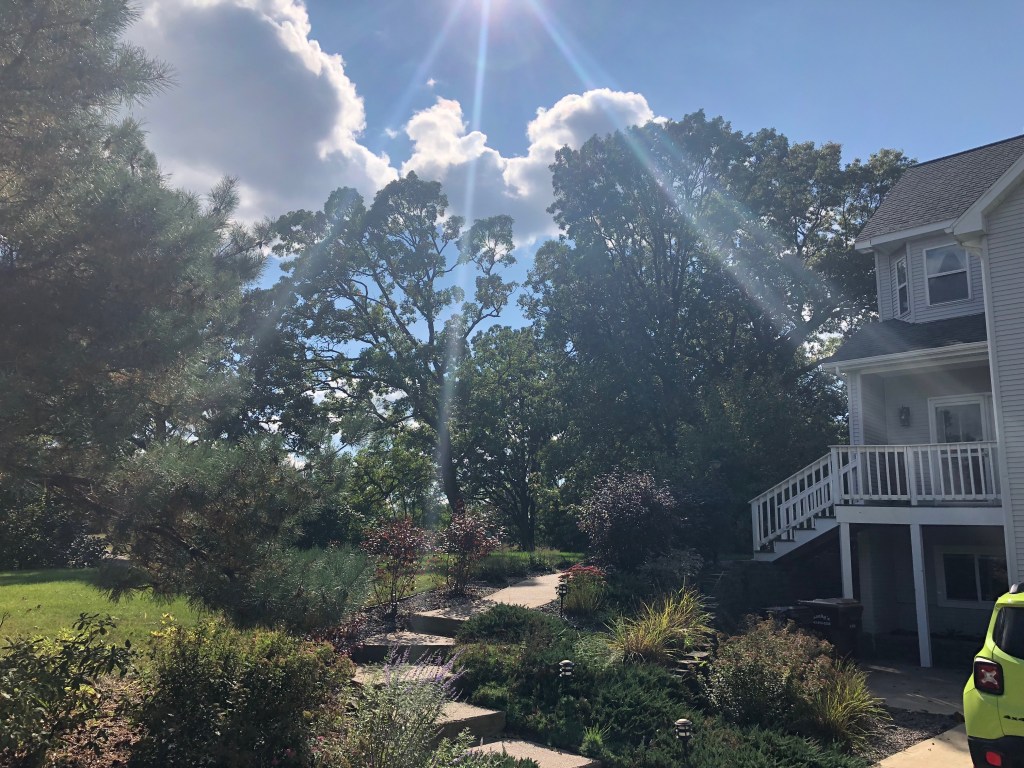 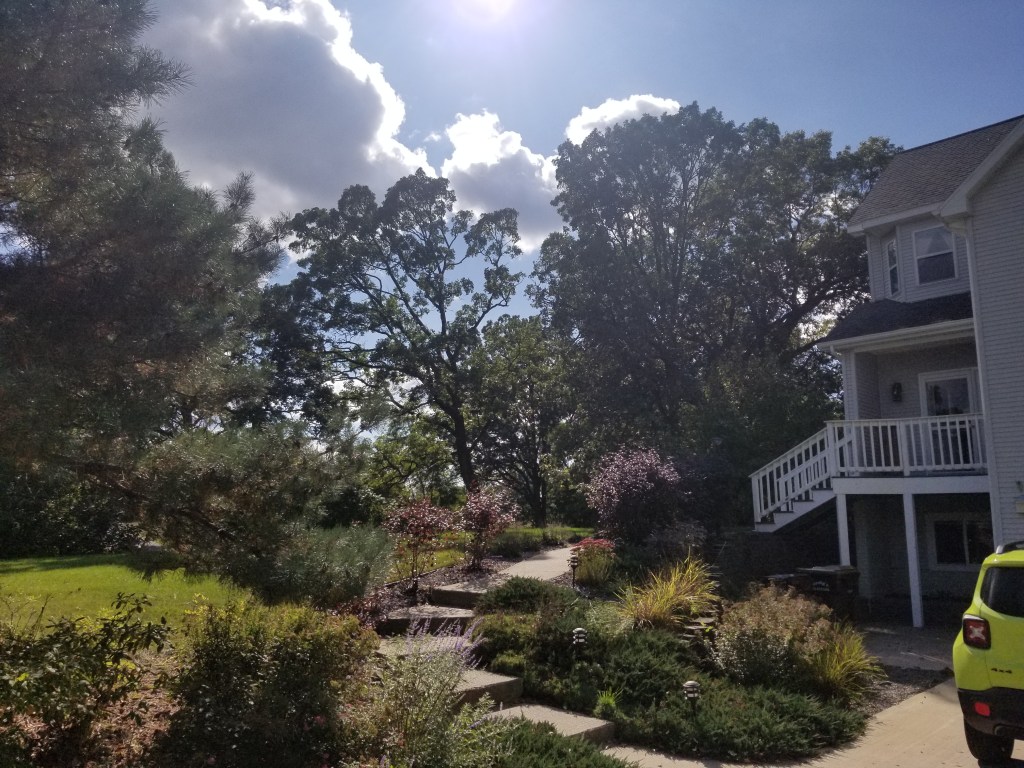 That said, the iPhone 8 and 8 Plus photos all had more clarity.

For video, I like the new slow-mo features that run in HD at 120 frames per second. I shot a video of an outdoor scene and there’s no stuttering or jaggies. The video looked as good as a slow-mo shot on other smartphones I’ve used, like the Galaxy Note8, and even rival the quality I’ve seen using pocket digital cameras from companies like Panasonic.

Extensive battery tests are quite difficult — it depends on the apps you use, the settings on the phone, and many other variables. Suffice it to say, the iPhone 8 and iPhone 8 Plus lasted about one full day in my testing, which consisted of average use — not watching videos too often or playing games constantly. And, critical to my success using these phones, I did not add the Facebook app, I used Bluetooth and Wi-Fi only as needed, and I set the screen to dim almost immediately.

That said, my testing also included a day of using the phones with easy access to wireless charging. I used the Mophie pad and an Ikea desk that has a built-in charging pad. Using the two phones that way, it was easy to keep them charged up throughout the day.

Once again, you should probably take many speed tests with a grain of salt. Your impression of speed will vary depending on how much you tax the phone. For me, the iPhone 8 and 8 Plus were noticeably faster for things like loading apps and playing games. Where I noticed the speed boost the most is with a game called The Machines, which uses AR to let you battle with virtual characters on top of a real table. The game ran silky smooth.

There’s a noticeable improvement in quadio quality and loudness with the new iPhones. Listening to the band Dawes on both the iPhone 8 Plus and the Note8, there’s really no comparison — the Note8 sounds distorted, with bass that is barely tolerable. The iPhone 8 Plus audio is so pristine (for a phone) and loud, I’d use it over many lower-quality Bluetooth speakers.

I mentioned how AR works fast and slick on the new iPhones. The Sky Guide AR app is another impressive example. I used one to examine exactly what is around the moon in the sky and inspect an entire galaxy. You look through the phone and see pop-up graphics that perfectly match what you are actually seeing in the sky. Sure, it’s something that’s been around a while. But it’s cool to be able to finally do this in higher resolution on a super-fast iPhone.

You can upgrade a previous iPhone model to iOS 11, so this is not a huge perk, but it’s worth noting that the new live wallpapers, Control Center for easy access to common functions, a more natural-sounding voice for Siri, and a host of other improvements all worked faster on the iPhone 8 and iPhone 8 Plus. There’s no question about speed or slowdowns. I never had any issues with speed, crashes, slowdowns, or app issues on iOS 11 on either iPhone.

Those are the features that impressed me the most. After testing the phones, I realized the wireless charging and AR could be game-changers for loyal iPhone users. Of course, these features are not new, so Android users might be a little underwhelmed. What could win them over is the speed of the phones, the better clarity for photos (without as much color), the louder and fuller audio for movies and games, and the new iOS features.

In the end, both new models are solid upgrades. You get wireless charging and AR, plus a host of iOS 11 improvements. They are well worth the price, although I could see waiting for the iPhone X in November if you really want a more colorful, brighter screen as well.