A fledgling European recruitment startup has scooped $10 million (€8.75 million) in funding to grow globally and help connect job-seekers with employers at short notice.

Available on Android and iOS, Job Today is targeted at small businesses in the retail, hospitality, and services industries. It’s setting out to “revolutionize” the hiring process through a mobile-only platform that simplifies candidate-company matchmaking. 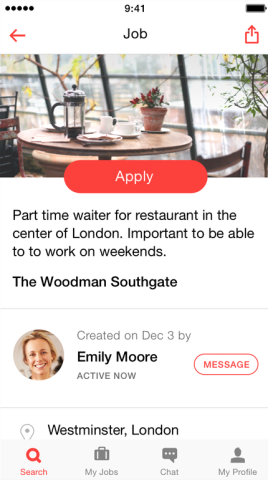 Recruiters and candidates download the same app, but it’s then divided into two sections — one that lets employers see available workers, and one that lets workers view roles in their locale. Job-seekers create a profile in a few minutes, then apply for a job in a single tap. There is also a built-in messaging feature to facilitate real-time conversations.

Similar to startups such as HotelTonight, which helps travelers find accommodation at the last minute, Job Today is all about the here and now. Employers are able to post quick position vacancies, view how many people are interested, and create shortlists for candidates. Positions are filled within 24 hours, which sets this platform apart from other recruitment portals such as CareerBuilder, Monster.com, or even Craigslist.

Founded out of Luxembourg, a small landlocked country in western Europe, Job Today launched in Spain initially last May, and was only available in Madrid and Barcelona until it hit London in October. This was followed by Paris just a few weeks ago. The company says it has signed up 20,000 employers in its eight months since launch, including well-known European brands such as Ann Summers and Reiss, and two million applications have been submitted, with 10,000 people finding work.

Polina Montano, cofounder and COO of Job Today, has confirmed with VentureBeat that the U.S. and world at large is in its crosshairs, too.

“We are planning to launch Job Today in the U.S. in 2016,” she told VentureBeat. “We set out to be a global solution to fix the broken recruitment industry — this is a $400 billion industry globally, with approximately $260 billion in low-skilled staffing. There are 200 million unemployed people worldwide, and Job Today can help them.”

The $10 million series A round was led by Accel, with participation from Felix Capital and Mangrove Capital Partners. The cash influx represents the company’s first institutional funding, but it did raise an initial seed round of €1.5 million from Mangrove Capital a few months ago — however, that figure has been rolled into the bigger round it’s announcing today.

“We want to change the lives of millions of people around the world by helping them find work,” added Montano. “In enabling SMEs and the service industry, two underserved parts of the job market, to hire staff quickly and easily, we’ve helped thousands of people find jobs in just eight months. The initial traction, round of funding, and new market launches are important steps towards expanding the business further and fulfilling our goal.”

Job Today certainly offers a compelling proposition. It matches people looking for work ASAP, with employers looking for workers ASAP. The fact that it’s only available on mobile phones, too, is indicative of where society is heading. With tech titans such as Facebook now claiming that around half of its users only ever access the service on mobile phones, this shift away from traditional computers is further evidenced in emerging startups such as Job Today.