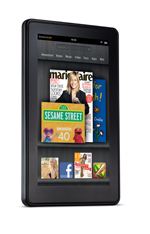 After some back-and-forth between Amazon and Wattpad, a third party e-reader app, Kindle Fire owners can now use a different apps to read e-books on their device.

Before now, Amazon had been hiding competitor’s e-reader apps in the Kindle Fire’s Amazon Appstore. The apps still showed up in the web-based Appstore, but weren’t available for download onto the Fire. Hidden e-reader apps included Wattpad, Kobo, and Bluefire, all competitors of the Kindle.

For those who wanted these e-reader apps on their Fire, they could use work-arounds to download them. Customers needed to sideload the app, which is downloading it from a different source, a somewhat confusing process for the average Kindle owner.

“Over the past couple of weeks we’ve spoken with representatives at the Kindle Fire Store, first over email and then eventually with some phone calls up to the higher levels, convincing them that we’re actually a valuable complementary service,” a spokesperson for Wattpad wrote in an email to VentureBeat “Our community is super engaged readers and writers; they are passionate book lovers and eventually Amazon came around to see the value we could bring.”

After some back forth between the two companies, Amazon made the Wattpad app available for download on the Kindle Fire. Kobo and Bluefire apps are still missing from the Fire’s Appstore.

It’s not surprising that Amazon hid these apps; they could cut into Amazon’s profits from e-book sales. And given that Amazon just barely breaks even with its sales of the Kindle Fire, Amazon is counting on e-book sales to make the Fire profitable. With Kobo’s in-app marketplace selling the same books at around the same prices as Amazon’s Kindle store, Kobo could be a big threat to Amazon’s digital content sales. Just because Wattpad made it back onto the Kindle Fire, doesn’t mean will we seen other apps follow suit.