Roboticists from around the world came together in Pomona, California, today and yesterday for the 2015 Defense Advanced Research Projects Agency (DARPA) Robotics Challenge, and DARPA has just named the winner: Team KAIST of South Korea.

The team is a collaboration between the Korea Advanced Institute of Science and Technology (KAIST) Humanoid Robot Research Center and Rainbow Co., a company that was spun out of the KAIST research lab. The team’s humanoid robot, HUBO, stands 5 feet 9 inches tall, weighing in at 176 pounds. It works in bipedal mode, and it can kneel down to roll around on wheels.

The victorious KAIST team scored $2 million. IHMC Robotics, which came in second place, is walking away with $1 million, while third-place team Tartan Rescue from Carnegie Mellon University is going home with $500,000. The event comes after the DARPA’s software-based Virtual Robotics Challenge in June 2013 and the DARPA Robotics Challenge Trials in Homestead, Florida, in December 2013.

More importantly, the performance of the team and its competitors give insight into the current capability of human-controlled robots that can respond to disaster situations.

Unlike the DARPA Grand Challenge competitions to race autonomous vehicles in past years, this event directed researchers to make robots complete tasks in a disaster-response context. That’s because DARPA wants to improve the technology the U.S. can call on under circumstances that would be too dangerous for people. 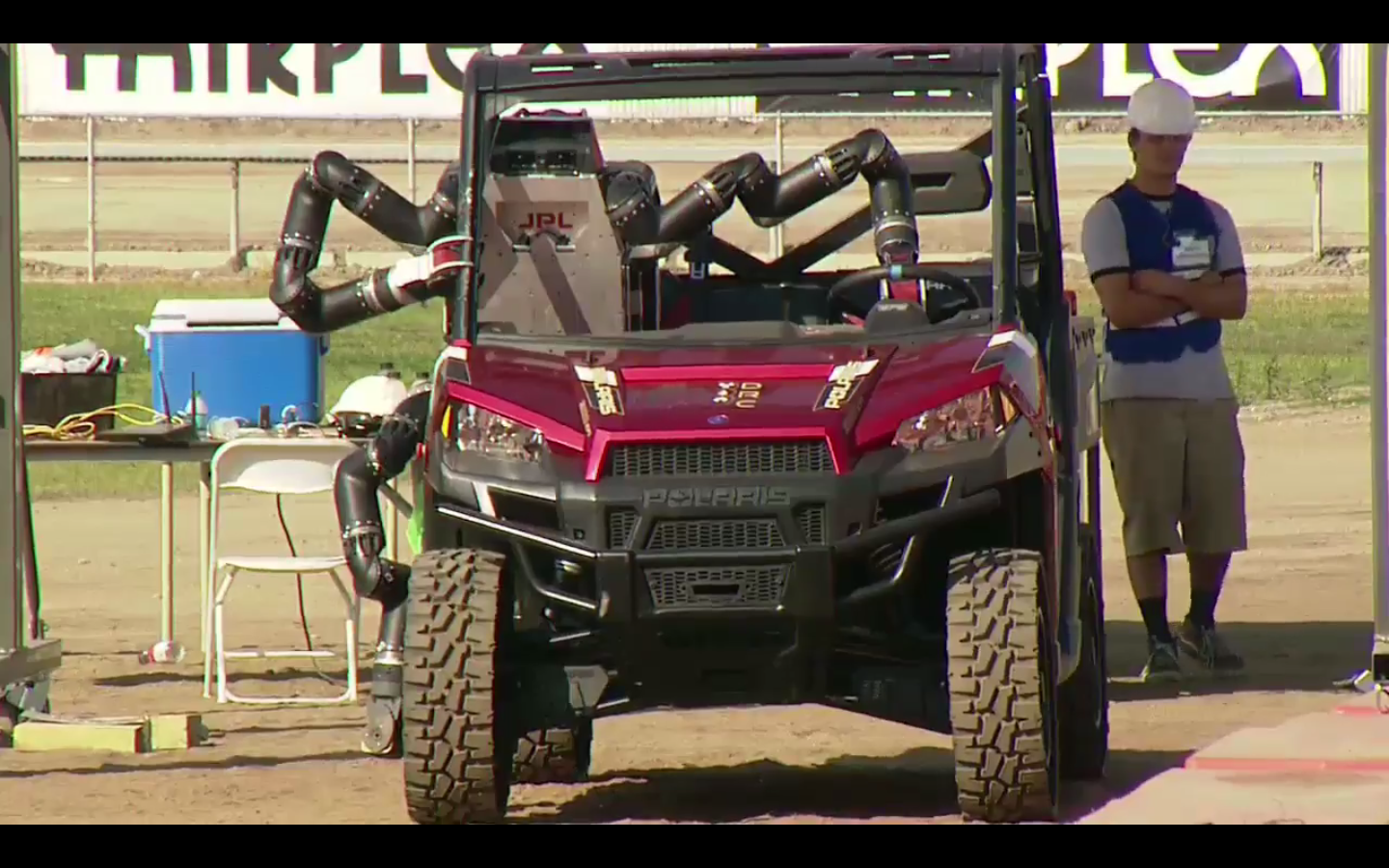 Above: The RoboSimian robot from NASA’s Jet Propulsion Laboratory drives at the 2015 DARPA Robotics Challenge in Pomona, California, on June 6.

Robots had to do things like drill a hole in a wall, walk up steps, and tread uneven ground. But the Internet network that teams used to communicate with their robots at times didn’t work for 30 seconds or more, to simulate real-life conditions. That made matters somewhat difficult for the 23 teams, who hailed from the U.S., China, Germany, Hong Kong, Italy, Japan, and South Korea.

The event had a slowly building sense of drama, sort of like a baseball game. It was quiet with hardly any action at some points and then suddenly a great burst of action with spectator noise just a few moments later.

Robots would breeze through some tasks but then stumble at others. Over time, some began to look generally more capable than others.

The IHMC Robotics team, from the Florida Institute for Human & Machine Cognition, with sponsorship from Amazon and Atlassian, sat at the top of the standings midway through the first day of the challenge. IHMC was fielding an ATLAS robot from Google-owned Boston Robotics called Running Man. 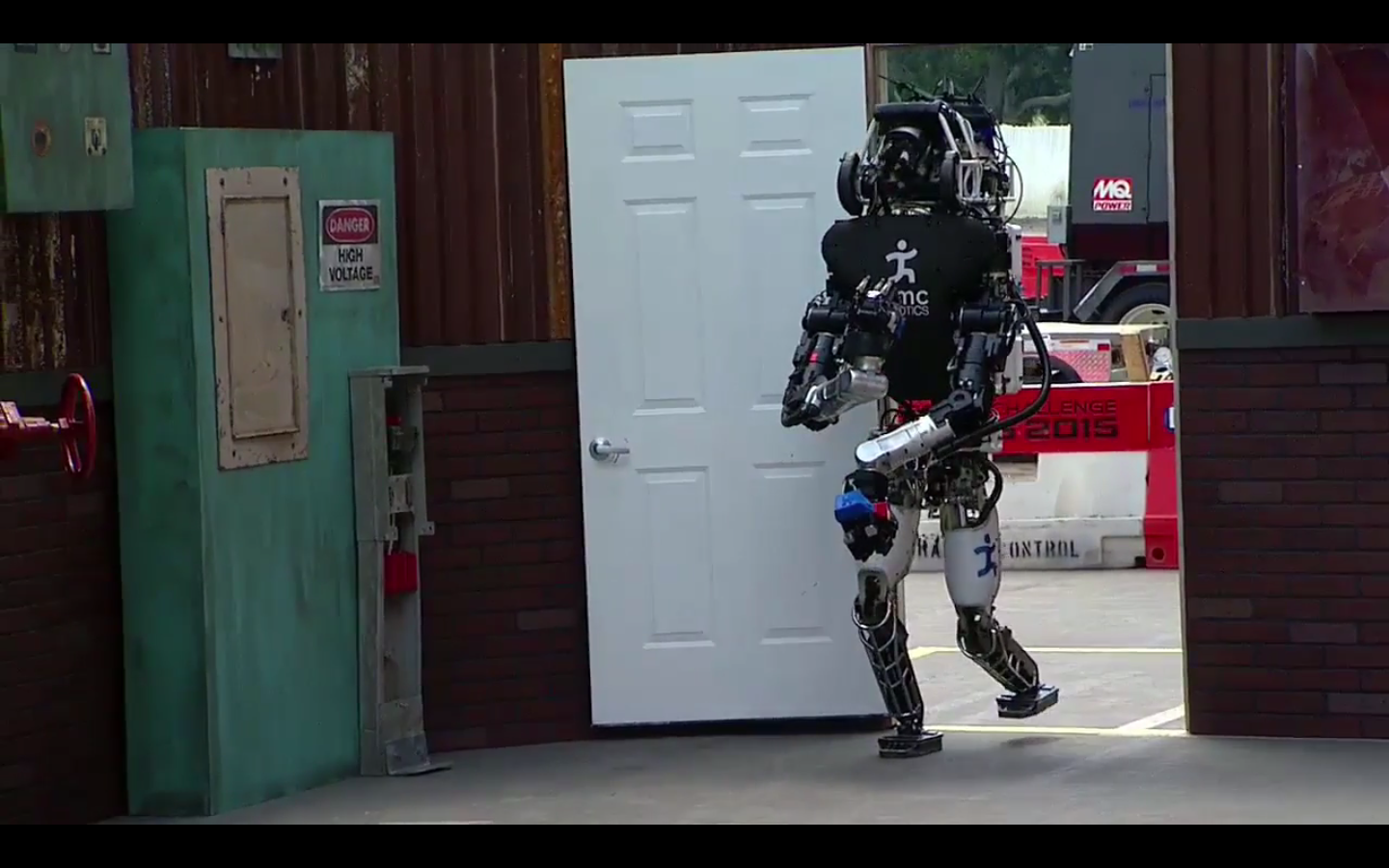 Above: The IHMC Robotics robot opens and goes through the door during the 2015 DARPA Robotics Challenge in Pomona, California, on June 5.

But the bot proved imperfect. It fell over and missed out on scoring a point while walking over rubble.

The HUmanoid roBOt, or HUBO, from Rainbow Co. and the Korea Advanced Institute of Science and Technology (KAIST) Humanoid Robot Research Center, looked very good at some times during the first day but ran into a bit of trouble.

For instance, when it had to use a drill to cut a hole around a black circle on a wall, it didn’t go all the way around the black circle in one area. 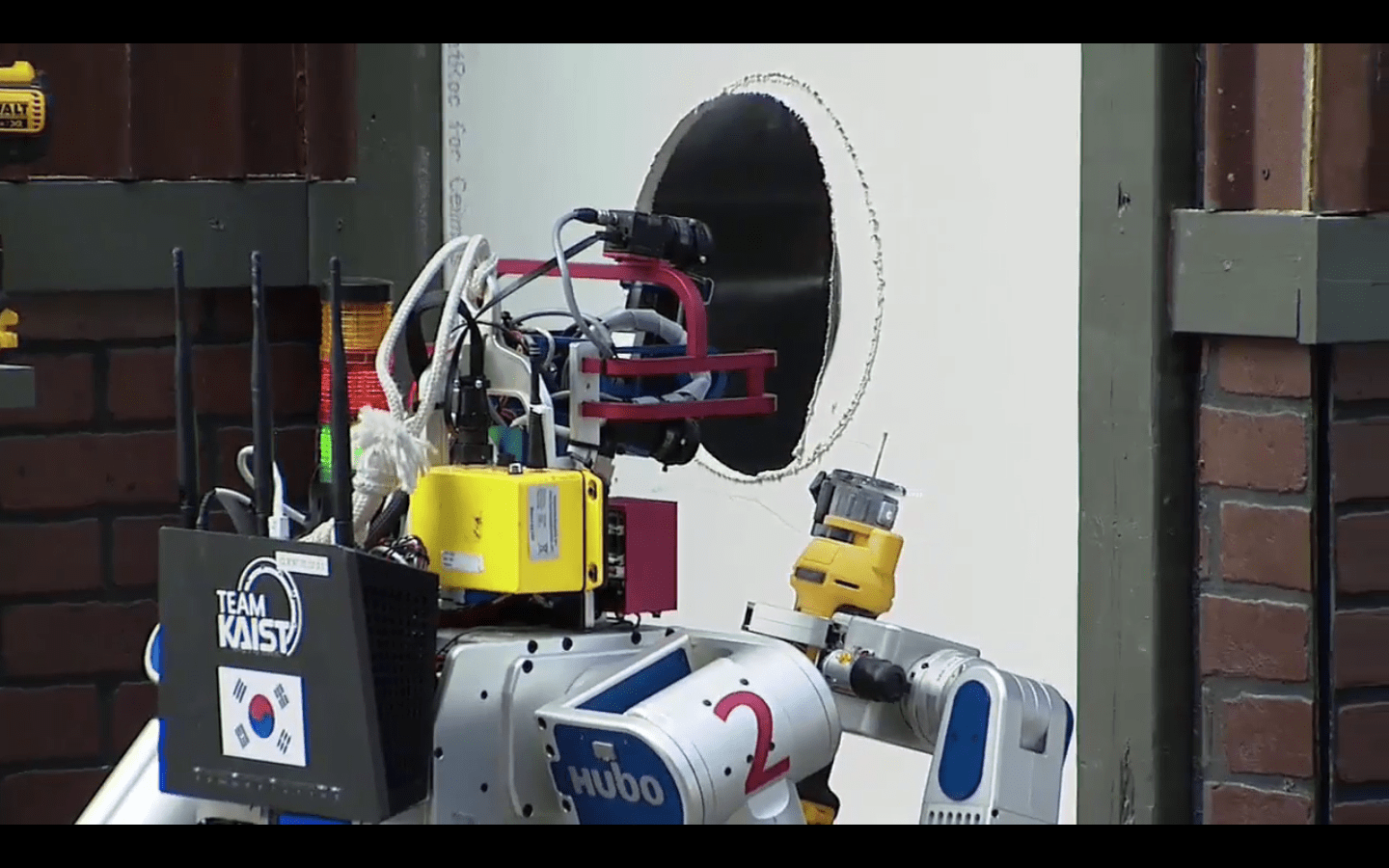 Above: Team KAIST’s HUBO robot failed to drill the whole way around the black circle on the wall at the 2015 DARPA Robotics Challenge in Pomona, California, on June 6.

Still, KAIST’s HUBO did move quite quickly in the process of completing the tasks.

By the end of the first day of the competition, Tartan Rescue’s CHIMP robot was at the top of the standings, with eight points, having completed all tasks in 55 minutes and 15 seconds.

The robot even managed to get up on its own after falling. Amazon, Foxconn, and Google, among others, are sponsoring the Tartan Rescue team, which hails from Carnegie Mellon University. (Tartan Rescue team members Tony Stentz, Eric Meyhofer, and David Stager are all said to be working on Uber’s autonomous vehicle project; team sponsor Google, of course, has its own driverless-car initiative.) 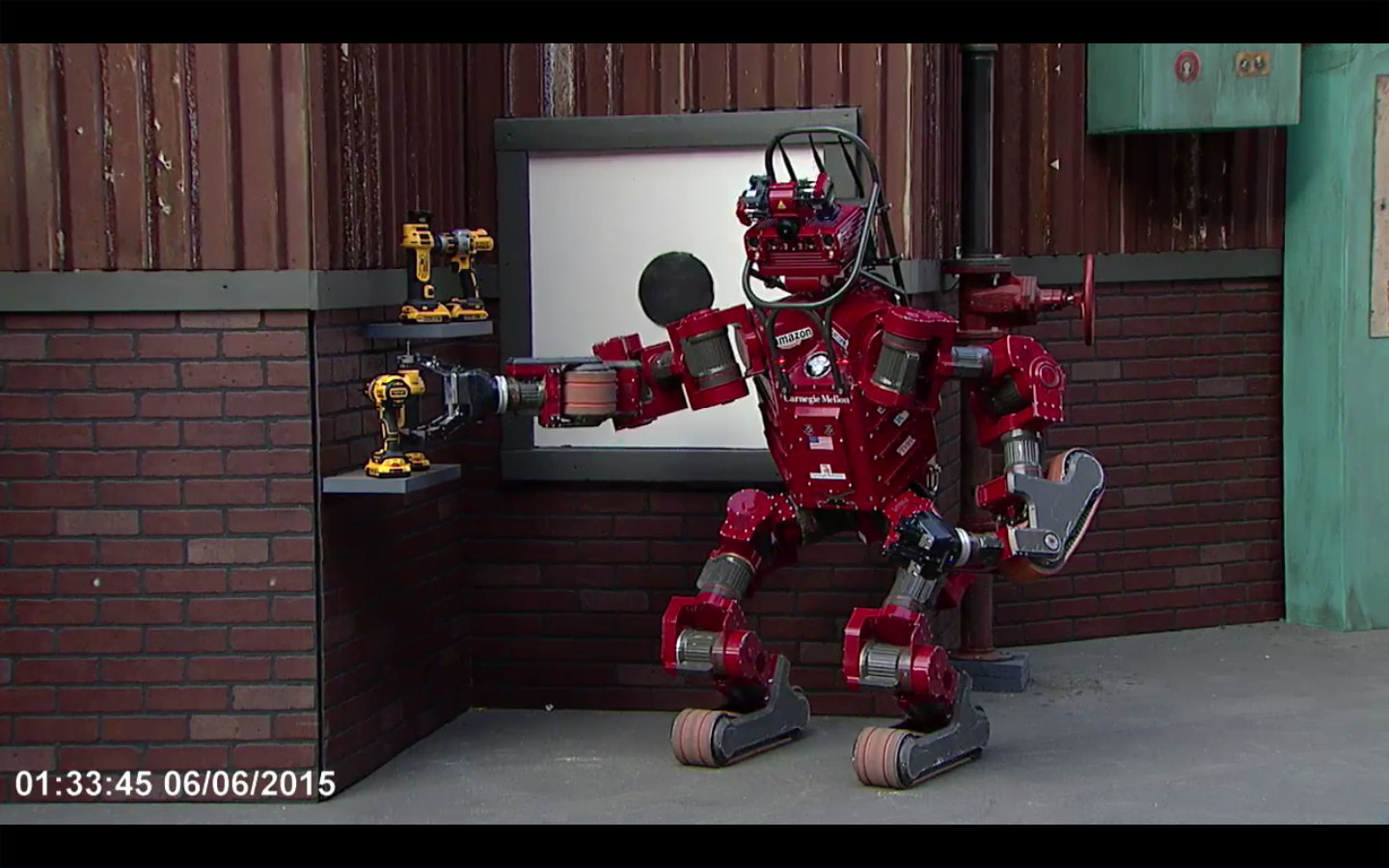 Above: Tartan Rescue’s CHIMP robot picks up a drill for the wall task at the 2015 DARPA Robotics Challenge in Pomona, California, on June 4.

The Tartan Rescue CHIMP and other robots on wheels, like Team NimbRo Rescue from the University of Bonn’s Computer Science Institute, moved more quickly and smoothly than humanoid robots taking steps with feet. The ATLAS robot that several software-only teams chose to rely upon has feet, not wheels.

Generally speaking, the robots on display during the competition moved quite slowly. Watching DARPA’s live stream from home, it was hard not to shout at the screen to tell the robot to come on and move forward and start doing the task already.

And it was painful to watch the robots fall, partly because many of them are fragile. After the wipeouts, crews could be seen approaching the robots. Seeing multiple people huddled around these machines was a comforting reminder of just how dependent cutting-edge robots still are on human labor.

The ATLAS Hercules robot, from team TRACLabs Inc. of Webster, Texas, took a particularly bad fall today during the egress task, which involves getting out of a vehicle after driving it forward.

At first Hercules looked like it would succeed in the task, with onlookers clapping, but then, while stepping down from the vehicle, things went sideways — literally. Hercules put its left foot down on a step stool on its way down to the ground, but then appeared to lose its balance. The robot in slow motion tilted to the left, then fell all the way to the ground with a great thud. “Awwwwww,” said people watching on site. “Nooooo,” I said, while watching from my living room.

But hey, at least Hercules did manage to drive the vehicle, a Polaris Ranger.

There were little errors to laugh at, too. Today the ATLAS Warner robot from Worcester Polytechnic Institute and Carnegie Mellon University — sponsored by Nvidia and Axis Communications — dropped the drill it was going to use to make a hole in a wall, and then moved on to the next task. 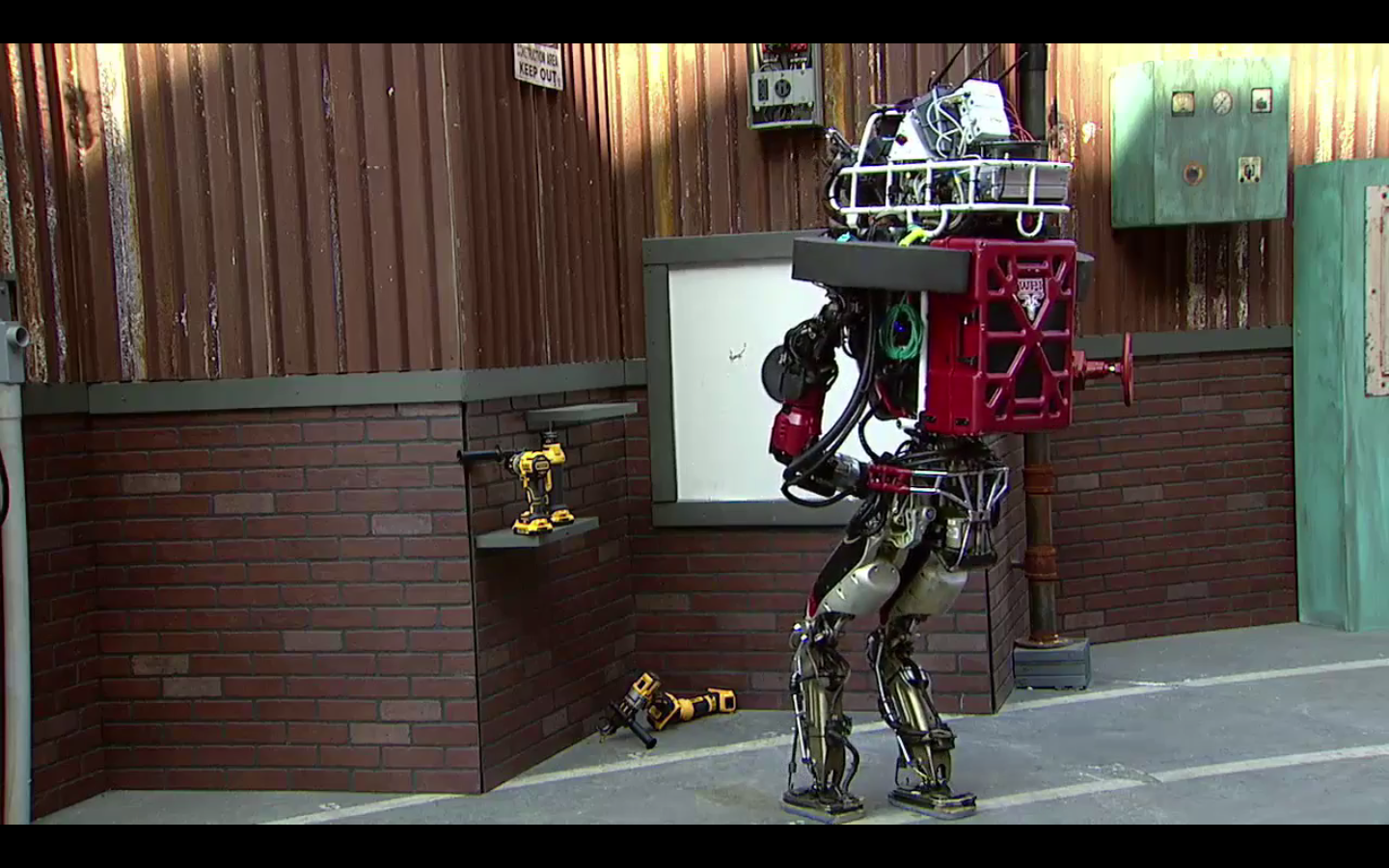 Above: The WPI-CMU Warner ATLAS robot drops the drill it was going to use to make a hole in a wall at the 2015 DARPA Robotics Challenge in Pomona, California, on June 6.

After the IHMC Robotics robot walked up the stairs today, it put its arms in the air to celebrate — and promptly fell down.

Today NASA Jet Propulsion Laboratory’s RoboSimian robot, a fan favorite, just couldn’t seem to stick a plug into an outlet after a couple of attempts.

And yesterday the ATLAS Leo robot from Team Trooper from Lockheed Martin’s Advanced Technology Laboratories started to close an open valve but had to stop midway through and get picked up by a crew — the team reportedly ran out of time.

All bot bloopers aside, though, this competition proves that robots are increasingly capable of doing helpful things, even when their human operators can’t always immediately tell them what to do.