Lemonade, a peer-to-peer (P2P) insurance firm that’s been in stealth for a year, has finally launched to the public in its first market.

The New York-based startup raised a chunky $13 million seed round last year, in one of lead investor Sequoia Capital’s largest ever seed investments. Lemonade has some notable people at the helm, too, including president and cofounder Shai Wininger, who also cofounded jobs marketplace Fiverr back in 2010.

Lemonade announced today that it is now a fully licensed insurance carrier in New York, which means homeowners and tenants across the state can get insured and settle claims on the spot, across multiple devices. 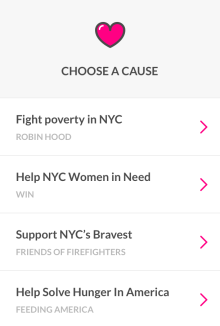 The company’s platform is built around a number of core founding principles. At the root is a desire to remove friction from the insurance process, cutting bureaucracy, time needed, and costs. But Lemonade is also setting out to combat existing models through an annual “giveback,” where it donates unclaimed money to good causes. Through the app, users select a cause that they care about, and this cause-creation process generates virtual groups of like-minded people — or “peers.”

Premiums from each group cover any claims made by individuals, with leftover money going to their common cause. And Lemonade makes money by taking a 20 percent flat fee from monthly policy payments.

There are many good reasons for working in this way. Traditional insurance companies are de-incentivized to pay out claims, because not paying out claims is how they make more money. Lemonade circumvents this by giving away all unclaimed money.

Moreover, most people don’t like insurance companies — “disdain” may be an apt descriptor for most customers’ sentiment toward insurers. As such, people may be more inclined to file false claims. The peer-based system in which local causes stand to benefit is designed to de-incentivize dishonest behavior. Nobody wants to cheat a good cause out of money… right?

“Since we don’t pocket unclaimed money, we can be trusted to pay claims fast and hassle-free,” said Dan Ariely, the company’s “chief behavioral officer.” “As for our customers, knowing fraud harms a cause they believe in, rather than an insurance company they don’t, brings out their better nature too. Everyone wins.”

Lemonade hired Ariely back in February, and he has solid credentials — he’s a professor of psychology and behavioral economics at Duke University and author of a number of bestselling books on the subject.

“Dan’s extensive research on dishonesty showcases the leaps science has made in understanding what brings out the best and worst in each of us and how people’s behavior can be changed for the better,” said Wininger. “We believe that behavioral economics, together with our unique technology, will help us decrease fraud, get rid of bureaucracy, and lower costs for our customers.”

The concept of P2P insurance isn’t entirely new.  Friendsurance, Guevera, PeerCover, and others around the world also promise a peer-based approach to selling insurance. However, Lemonade claims to be the first fully licensed P2P entity that doesn’t lean on third-party firms or brokers — it issues its own policies.

According to Lemonade’s figures, fraud represents almost 40 percent of all the money paid out in the traditional insurance system, which leads to inflated premiums. Lemonade is pushing back against this and striving to build honesty into the core of its product.

“It’s not our money,” explained CEO and cofounder Daniel Schreiber. “We repeat that sentence like a mantra and have it emblazoned on our office walls.  We never want to be in conflict with our customers. We never want to make money by denying claims. And that means giving back underwriting profits.” 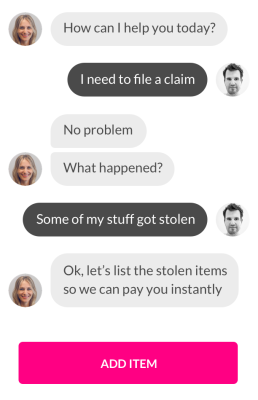 Amidst all the hullabaloo and grand proclamations of ethics and principles, it’s easy to lose sight of how Lemonade actually works on a practical level. For homeowners, policies start at $35 per month, while renters are able to obtain policies from $5 per month. But it’s the mobile-first approach that could be the big selling point for many, as the whole process is optimized for smartphones.

Chatbots are used to automate interaction between Lemonade and its customers — a growing trend we’re seeing across the commercial spectrum. Users taking out a policy or making a claim may interact with Maya or Jim — these are actually real people at Lemonade, but it’s their automated “alter egos” that people will be dealing with for the most part. That said, the human incarnations of Maya and Jim are on hand to help.

“Technology drives everything at Lemonade,” continued Wininger. “From signing up to submitting a claim, the entire experience is mobile, simple, and remarkably fast. What used to take weeks or months now happens in minutes or seconds. It’s what you get when you replace brokers and paperwork with bots and machine learning.”

From today, residents across New York State can buy a new policy with Lemonade, either through the web or via the Android and iOS apps.