LG today is unveiling its V20 smartphone, which follows up on the V10 that LG introduced last year. The new version of this large 5.7-inch handset has a newer chip, more sophisticated dual rear cameras, more battery capacity, and a more elegant feel. Oh — and it’s the first phone to ship with Android Nougat, the newest version of Android.

The V20 is also the first phone to get In Apps, a new homescreen shortcut in Android that makes it easy to search through content on all installed apps. When you boot up the V20 for the first time, it’s one of the first things you see. Unfortunately the feature wasn’t working on the V20 that I had a chance to try out at a press briefing in San Francisco last week. But an LG representative assured me that it will work when it ships.

The V20 comes with several unconventional features that were part of the V10, including the customizable “second screen” at the top, the combination fingerprint scanner and power button on the back, and a case you can snap off to replace the battery. But the rugged silicone back has been replaced with a smooth aluminum alloy, and on the front, there’s just one 5-megapixel wide-angle camera, instead of two cameras. The “second screen” is twice as bright as the one on the V10 and uses a larger font size for text.

The dual rear cameras, which were a signature feature on LG’s G5 phone earlier this year, make for a fascinating mobile photography experience on the V20. Just like on the G5, in camera mode you see the device switch from the 8-megapixel 135-degree wide-angle camera to the 75-degree, 16-megapixel regular camera as you zoom in. At a glance, the pictures that the wide-angle camera produced looked stunning to me. When I zoomed in on the photos, though, I noticed some noise. I also detected noise when I zoomed in on photos shot with the 16MP camera. But not everyone will be so fussy. 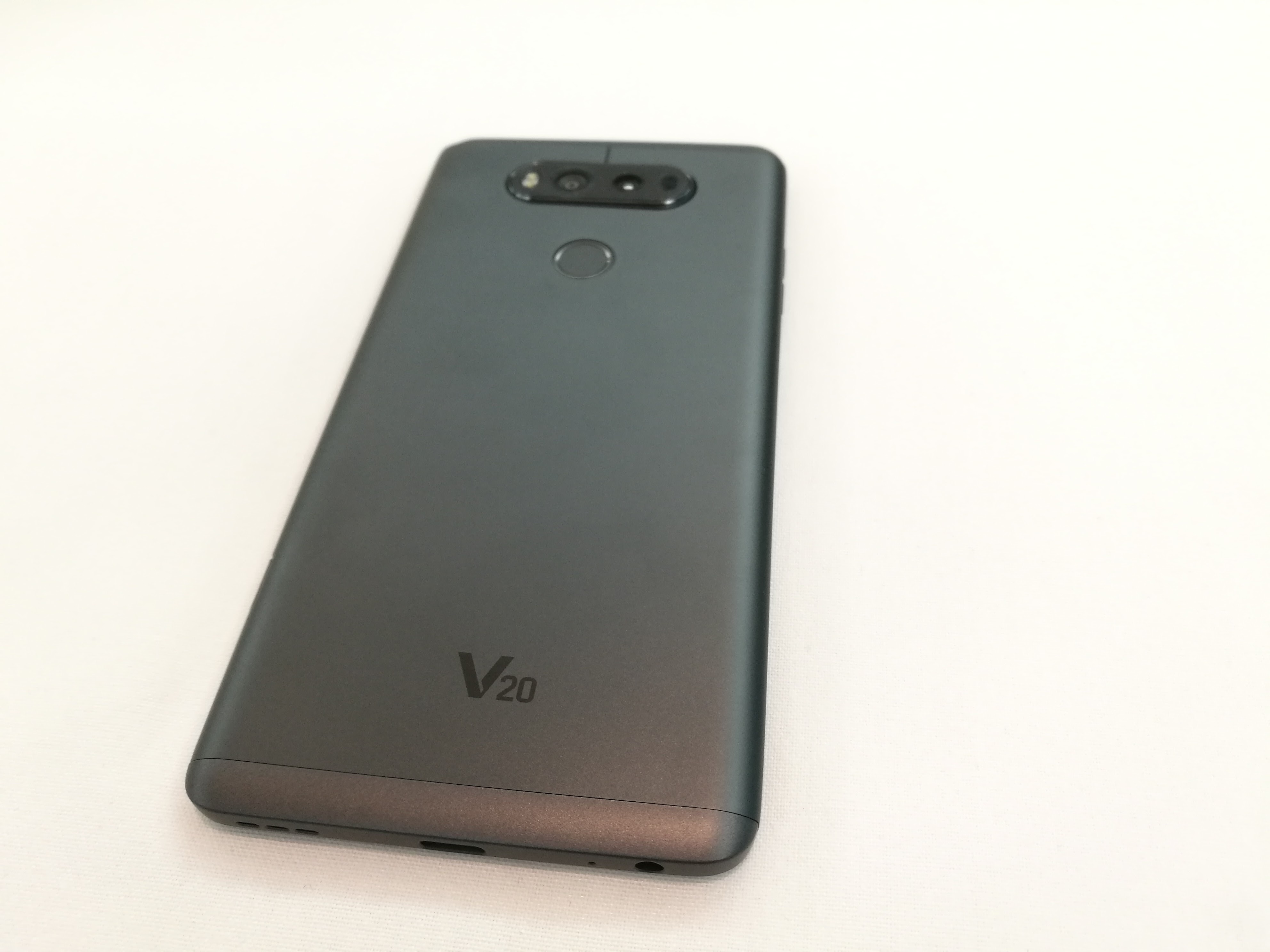 In video mode on the V20, you can apply a film effect to your footage. LG launched this feature on the G5, but only for photos — now it’s available for video as well. To me it seemed like a gimmick, but surely some people will like it. The phone features Steady Record 2.0, an improved mechanism for video stabilization that was developed in partnership with Qualcomm. The V20 also includes a manual video mode.

LG has improved audio recording in the V20 relative to the V10. The new phone can record at 132dB, up from 120dB; high-end LPCM 24-bit, 48khz recording is supported; and there will be 50 percent less white noise, LG said.

The phone features a Snapdragon 820 processor, 4GB of RAM, 64GB of storage with support for up to 2TB of storage via microSD, a 3200 mAh battery, and a QHD display. It measures 159.7 x 78.1 x 7.6mm and weighs 174g. The USB-C adapter supports fast charging. The phone will be available in titan, silver, and pink, although pink won’t be coming to the U.S. market.

The phone was quite snappy as I took pictures, checked websites, and switched between apps, and the 2560 x 1440 display (513ppi) is bright and crisp. Just like last year’s model, it’s still so big that it’s more comfortable to use with two hands than one.

The phone had many apps installed when I started using it — Facebook, Instagram, Evernote, LG’s QuickMemo+ — unlike the Nexus phones Google has promoted historically. Because Google is pointing to the V20 as the first Nougat phone, this was a bit surprising, but then again, this is more LG’s phone than Google’s phone.

All in all, the V20 seems to be a solid sprucing up of the V10, and it certainly looks like one of the better phones to hit the market in 2016. Because of its dual cameras and its large size, the V20 may end up getting frequently compared with the iPhone 7 Plus, which Apple is expected to announce tomorrow. We’ll get a better sense of how the phones stack up once we receive review units.

For a limited time, LG will give away free B&O Play H3 headphones when people buy the V20.

The V20 will be shipping in the third quarter of this year, as in before the end of September.

The phones will be sold at B&H, Best Buy, Sprint, T-Mobile, U.S. Cellular, and Verizon stores.

LG did not disclose the price of the phone and did not specify whether an unlocked version would be available. 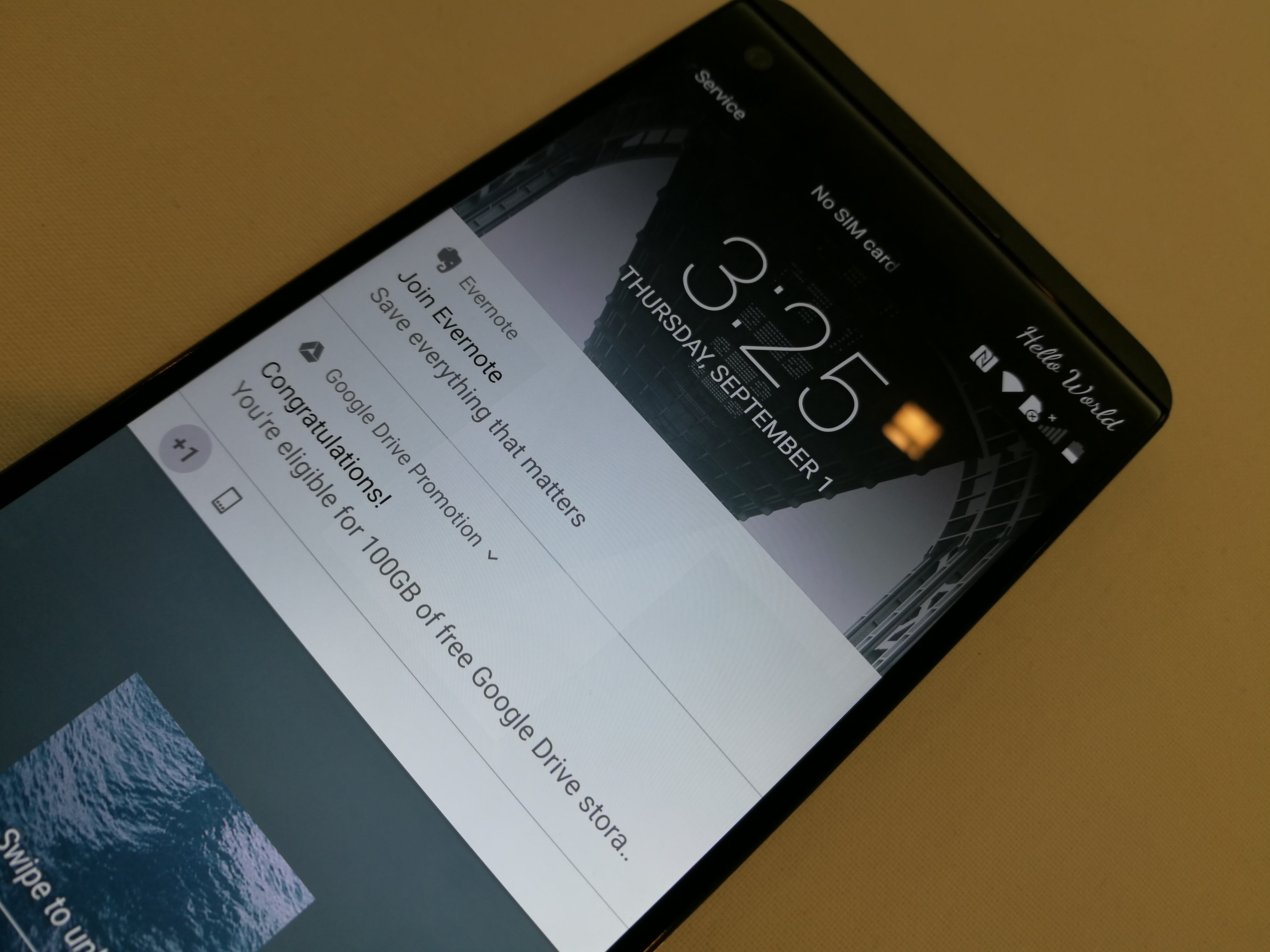 Above: The LG V20 lock screen.