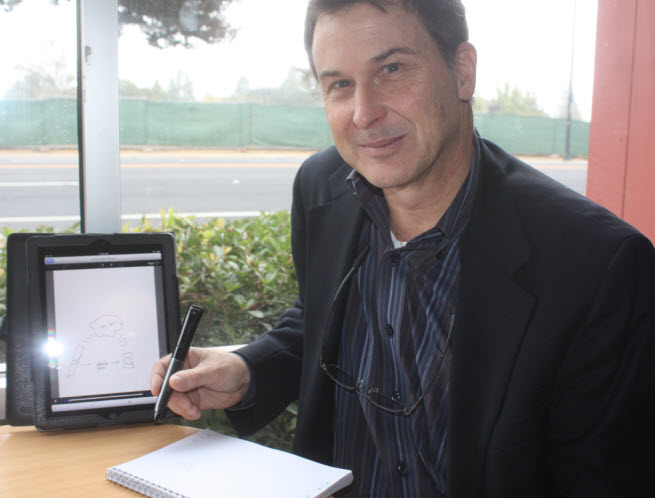 Livescribe keeps making its smartpens smarter. The company has created a pen that can capture writing, record audio, and then wirelessly transfer the captured data to a smartphone, tablet, or Evernote note-taking software on a PC. By doing so, the company makes it a lot easier to make use of and share notes from lectures that you’ve heard or meetings you’ve attended. 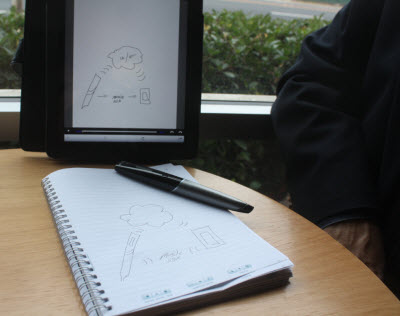 The Oakland, Calif.-based company is launching Sky, the first Wi-Fi-enabled digital pen that can transfer your data to cloud services, including synchronizing with Evernote, which has more than 40 million users. The new Sky wifi smart pen digitizes and records audio at the same timing, allowing consumers to capture everything they hear and write.

By moving handwritten work or recorded audio to Evernote, Livescribe makes it a lot easier to back up your important notes. Once the data has been securely stored on the cloud, it becomes easily searchable and can be played back, organized, and shared. The target audience is on-the-go people, from executives to students. Those individuals don’t have to choose between writing on paper or writing on a tablet, as the Sky smartpen allows them to write an image on paper and have that image appear automatically on a tablet.

“It’s like a companion to the iPad or Android tablet,” said Byron Connell (pictured), vice president of marketing at Livescribe, in an interview with VentureBeat. “We’ve overhauled our strategy to be more tablet and cloud-centric.”

Livescribe can also automatically transfer what you’ve written on paper to a tablet’s touchscreen. That makes sense because 54 percent of Livescribe users also have tablets. About 85 percent of tablet owners want to use those devices for notes, but only 13 percent say they are satisfied with tablets’ abilities to take notes, according to Livescribe’s own survey.

If you underline a word and then associate that word with an app, you can launch that piece of software in the future by tapping on the line. The pen also has a password feature so your data can remain private, and you can put your name on the display, making it easier for someone to return a pen to you if you lose it. With paper, writing is easy, flexible, and precise. But it’s easier to share, search, replay, and save on a tablet. Once in Evernote, the data is searchable and shareable.

Connell said the partnership with Evernote is a natural fit since 57 percent of Livescribe pen owners also use the note-taking software. Evernote allows you to take pictures of notes or other objects and then store them in a digital archive, which includes cloud storage for backup and access via a variety of devices. Rather than create such a solution itself, Livescribe decided it would partner with Evernote. Sky allows you to store 500 megabytes of monthly uploaded data, or 70 hours of recording time, for free. The Evernote sync can be set for automatic updating of material to the cloud storage.

“The Livescribe Sky wifi smartpen is cool,” said Phil Libin, CEO of Evernote. “It’s one of the deepest partner integrations that we’ve ever done. You get the feeling that a bit of magic just happened when you see your handwriting and words transformed instantly and wirelessly into shareable, searchable ideas in Evernote.”

One of the new apps that goes with the Sky smartpen is Transcribe Me, an audio transcription service using the latest transcription technology and crowdsourced techniques for providing high-quality audio-to-text conversion for Livescribe customers.

“Thanks to our unique partnership and joint development efforts with Evernote, we have created an amazingly simple and exciting new experience for our customers,” said Gilles Bouchard, Livescribe chairman and CEO. “With the Sky wifi smartpen, they can easily capture important ideas, presentations, and conversations in the most natural way, on paper, and they automatically appear right where they want them — on their mobile devices and personal computers.”

Livescribe is also launching its Mobile Software Developer Kit (SDK), which allows developers to create apps that work with the Sky smartpen via a Wi-Fi connection. For example, Branchfire, creators of iAnnotate, a popular PDF markup app, is building apps to help individuals make the most of their digital content. Other apps are also in the works. Livescribe showed a prototype app at a Cisco chief information officer conference where 30 people could work on a collaborative whiteboard at once.

“That one has a lot of academic potential,” Connell said.

In the U.S., the Sky wifi smartpen will be available at Best Buy, Fry’s Apple stores, college campus book stores, and online through sellers like Livescribe.com, BestBuy.com, and Amazon.com. A two-gigabyte Sky smartpen will sell for $169.95 and records around 200 hours of audio. The four-gigabyte version records 400 hours and sells for $199.95. The eight-gigabyte version will be sold only through Best Buy and Livescribe.com. That one sells for $249.95 and records 800 hours of audio, and it includes a one-year subscription to Evernote Premium. The older Echo smartpen sells for $119.

Livescribe has sold at least a million units since its debut in 2008. The pen is the first major product release since the company launched its Echo smart pen in 2010. In September 2010, Livescribe raised $39 million in venture funding, and it has raised more than $100 million to date. Investors include Crosslink Capital, Scale Venture Partners, Qualcomm, TransLink Capital, Presidio Ventures, Keating Capital, and existing investors VantagePoint Venture Partners, Lionhart, and Aeris Capital. Michael Stark of Crosslink and Rory O’Driscoll of Scale will join Livescribe’s board. Livescribe’s technology is licensed from Anoto.