Appboy, the mobile marketing automation vendor, analyzed over 9,000 marketing campaigns that use emojis and found emoji usage ascending rapidly — increasing at a nearly 8x (775 percent) year-over-year clip. And this torrid usage of smileys, animal faces, and cute icons has continued to increase in 2016 by 20 percent month over month. In fact, the company powered a whopping 5 billion emoji-laden messages from its clients last year.

Some additional data from the report:

Moreover, it seems all categories of apps have caught wind of the trend and started jamming emojis into messaging, especially as of early this year. 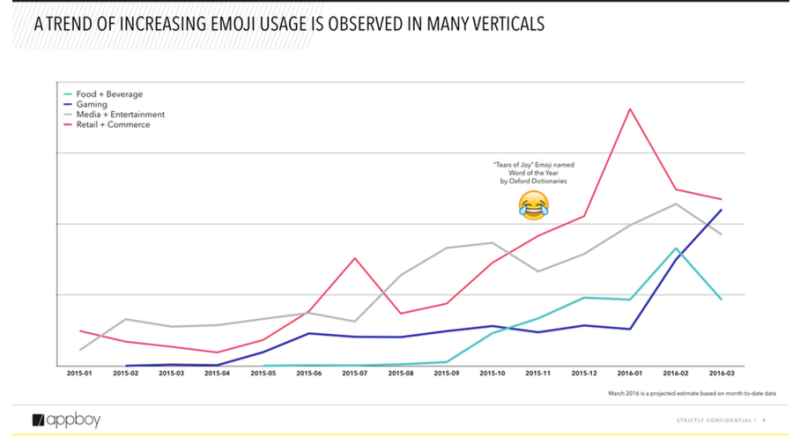 There has never been a market quite like mobile in terms of velocity and volatility. Eight hundred million users joined the smartphone revolution just last year. Another six hundred million will join up this year. Since 90 percent of a mobile user’s time is spent on email, social, and messaging, every other category vertical of apps is competing for a sliver of attention. With rising user-acquisition costs, and a mere 1/500 users paying for 50 percent of all in-app revenues, mobile publishers have to understand how to connect with users on their terms.

Marissa Aydlett, VP of marketing at Appboy, offered some advice in an email, “Brands shouldn’t be looking at emojis as the singular driver of a consumer’s action — open rates, engagement rates, etc. There are many other factors that contribute to the success of a message: tone, goal of campaign, message content, images, what the landing page or deep-linked mobile experience is like when the user arrives there. Everything needs to connect.”

“As a best practice, emojis should be relatable. Messages should be contextual. It’s not only about the demographic,” she said.

VentureBeat has published extensive research on the mobile marketing automation industry. Mobile marketers have no shortage of tools available to help them build and sustain user growth. There are app analytics, tools, and platforms centered on user acquisition — as well as Appboy’s category: mobile marketing automation (MMA). MMA is still a relatively new concept, and many of the players are one- or two-year-old startups. The grandfather of them all, Urban Airship, is only about six or seven years old.

We’ll be discussing mobile marketing automation and best practices in app engagement at our Mobile Summit on April 4-5 in Sausalito, California.