Meditation’s benefits are well-documented. A recent study by neuroscientists at Massachusetts General Hospital and Harvard Medical School found that people who regularly practice yoga and other mindfulness programs have measurably more gray matter in the hippocampus, the area of the brain that assists in learning, cognition, and memory. In fact, meditation has been shown to reduce the physiological and immunological symptoms of stress, such as inflammation.

CEO Kim claims that since April 2017 (a few months prior to a cameo on ABC’s Shark Tank), Simple Habit’s apps for Android, iOS, and the web have achieved “tenfold” uptick in revenue and over 80 percent organic growth. That’s translated to 2.7 million total signups and an average of 30,000 new users every week.

Simple Habit will use the fresh capital to further expand its library of more than 1,500 guided meditation sessions, and to offer audio content led by therapists and executive coaches. This year alone, it added 1,000 new audio tracks and doubled the number of contributors, who earn money on a Spotify-like revenue-share model.

The top 10 percent of content has over one million listens each, Kim said. 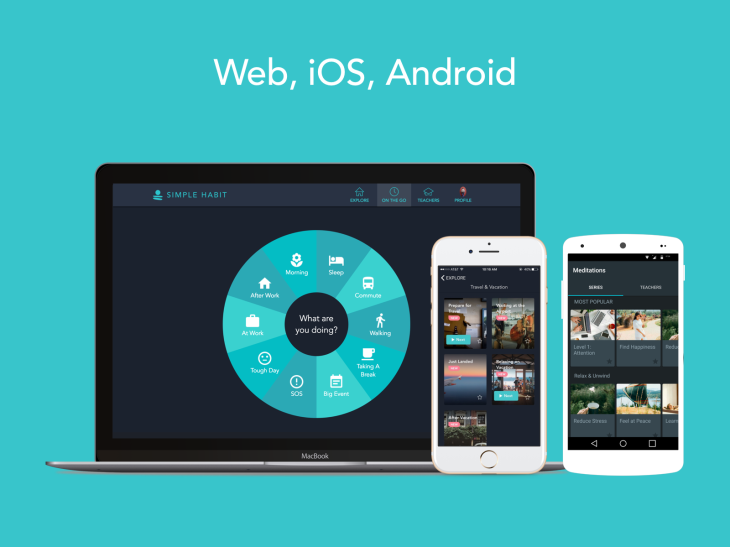 “Simple Habit has had a remarkable year,” Kim said. “We’re seeing that beyond every human’s desire to meditate is an even greater desire to reduce stress, feel happier, and face life’s challenges with more resilience. As a company committed to helping people live better, every day, these insights fuel our excitement and vision to be the destination for mental wellness.”

Simple Habit’s guided meditation tracks — which range in length from 5 minutes to 20 minutes — are organized by occasion, such as commuting, going to sleep, or preparing for a meeting. They feed into spotlight features like a daily notification that reminds users to be mindful, a flow graph that charts progress over time, and a stats screen showing the total number of sessions and minutes completed.

Roughly 50 or so of the sessions are free, but gaining access to the full catalog requires an $11.99 per month ($99 per year) subscription or a one-time $299 fee. Premium members also get offline listening.

When it comes to mindfulness and meditation apps, Simple Habit isn’t the only game in town. It competes with Headspace, Pause, Calm, Shine, BioBeats, and Digg cofounder Kevin Rose’s Oak, a few of which have a significant funding advantage. Calm raised $27 million at a $250 million valuation in June, while Headspace brought in a $37 million round last summer.

“The world desperately needs better ways to manage stress and anxiety,” Vassallo said. “That’s why Simple Habit is growing at a critical time. My partners and I believe in the great team at Simple Habit and their big vision to own the mental wellness and self-improvement market … As a current leader in the massive health and wellness category, Simple Habit has an incredible opportunity to both do well and do good.”