Opera has updated its eponymous web browser for the desktop with a crypto-makeover and a number of additional features.

The Norway-headquartered browser maker has also launched a marketing campaign to cash in on the EU regulatory order that requires Google to give Android users in Europe more options to choose their preferred browser.

Dubbed Reborn 3, the latest version of Opera for Windows, macOS, and Linux includes a native cryptocurrency wallet, which follows Opera’s Android app getting this feature in December. The wallet keys and transactions are synced between the desktop and mobile browsers, with the latter also serving as a way for the user to authenticate their identity, the company said.

Jan Standal, VP of marketing at Opera, confirmed to VentureBeat that the company plans to bring the feature to the Opera iOS app soon.

Currently supporting Ethereum only, Opera is the first of the mainstream browsers to pack a native crypto wallet. Standal said the feature has been “well received” by users so far, though he declined to share any figures or say whether Opera intends to add support for more cryptocurrencies in the future.

Additionally, Opera is speeding up the free VPN feature, after adding this feature to its Android app last month.

Collectively, these blockchain and privacy-focused features are part of Opera’s push to make its browser support so-called “web 3.” Standal described web 3 as a “paradigm shift” that will enable developers and users to interact with the web in new ways.

Part of web 3’s charm — if there is any — is that it is trying to replace existing mainstream services from large corporations, such as Facebook, WhatsApp, and Google Drive, with decentralized alternatives such as Steemit, Storj, Siacoin, and Status. Opera says the updated version of its browser supports such web 3 apps, so a user could “type in the address of a web 3 application into the address bar of the Opera computer browser and they will be able to explore web 3.”

It’s too early to say whether web 3 wields any actual benefits for users, or if it just a gimmick. 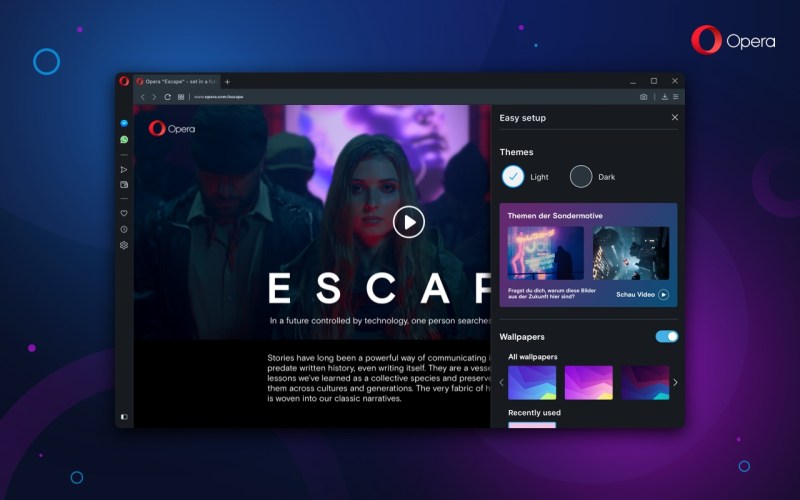 Opera has also launched a campaign called Escape, which includes a short science fiction film to educate users about how they could regain control of their digital lives. The campaign, which will see Opera invest in an ongoing marketing program, is aimed at making its browser a prominent name in people’s minds in Europe as they seek more control over choosing their preferred web browser.

Last month, Google said it would give people in Europe more choice over the browser and search engine they wish to use in Android following regulatory action.

“Foremost, we want to provide people with browsers that are equipped with features we believe they need to handle a modern web,” Standal said. “We are now the only major browser that has these unique features, and our challenge is to make people, especially in Europe, aware of the choices they have.”

In an earnings call with investors in February, Opera revealed that its desktop browser had more than 60 million monthly active users, up 11% since late 2017. More than 200 million people use Opera’s smartphone products as of Q4 2018, the company said.

If these features don’t cut it for you, Opera 60 is also getting a new paint job. It is introducing a borderless design, with a view toward making browsing less distracting. It’s also getting two more themes.