There’s no shortage of choices when it comes to managed hosting platforms (MHP), and some niches are more cutthroat than others. WP Engine, for instance, offers a WordPress-backed solution tailor-made for bloggers and enterprises, while Flywheel and MediaTemple target designers. One of the fastest-growing categories in the $70 billion industry, though, is marketing, and San Francisco-based Pantheon appears to have it on lock.

Pantheon, which was founded in 2010 as a Drupal extension and which later expanded to WordPress, is one of the largest MHPs of its kind, with over 10,000 customers (including Google Cloud, SendGrid, Apigee, Tableau, Yale, Coach, the United Nations, Quicken Loans, MIT, Harvard Medicine, and IBM) and more than 50,000 developer sign-ups each year. To lay the foundation for future growth, it’s raised $40 million in series D growth financing led by Sageview Capital, it today announced, with participation from existing investors Foundry Group, Scale Venture Partners, and Industry Ventures.

This comes after $29 million and $21.5 million series C and series B funding rounds, respectively, and brings Pantheon’s total capital raised to over $100 million.

CEO Zack Rosen said the cash infusion will be used to expand Pantheon’s sales, marketing, and product teams, all toward the lofty goal of one day powering 30 percent of the world’s websites. It’s progressing slowly but surely toward that: Pantheon claims its container-based cloud platform currently runs more than 285,000 Drupal and WordPress websites (up from 150,000 sites three years ago) and serves over 10 billion page views a month. 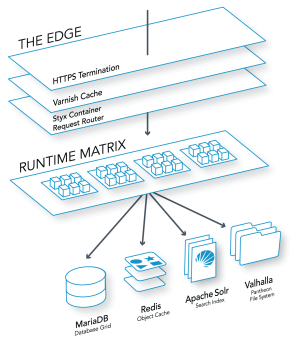 Above: Elastic hosting with Pantheon.

“Our customers have demonstrated that the ability to iterate faster leads to achieving their business results faster. To help them iterate faster, we’re laser-focused on managing uptime, security, scaling, performance, and on automating development workflows that often prevent web teams from focusing on innovation and creating value,” said Rosen. “Agile marketing has quickly become fundamental to many of the world’s largest companies and Pantheon is proud to be at the center of this historic shift … This investment will help us continue to expand our customer base and set the new market standard for WebOps.”

Pantheon builds Drupal and WordPress sites undergirded by a “lighting-fast” content delivery network (CDN) that’s powered by Fastly, an edge cloud platform that caches pages from more than 40 locations and 60 points of presence across the globe including Dubai, London, Sydney, Johannesburg, Boston, Seattle, and Buenos Aires. According to Pantheon, most customers achieve “sub-second” page load times and 99.9 percent uptime thanks in part to it, and to a proprietary network-backed file system — Valhalla — and routing technology that dynamically scales across server clusters.

Pantheon has a nifty migration toolkit that makes it easier for developers to move existing websites to its platform, along with dedicated development and staging environments that mirror production sites’ configurations. Populating those environments is a robust set of dev tools, among them an integrated Terminus command line, a local Docker-based environment, full-text search powered by Apache Solr, and automated Git-based workflow with feature branching.

Set-it-and-forget-it is the name of Pantheon’s game, and toward that end, customers get automated updates and backups and site-monitoring tech that runs over a million checks a day for potential performance issues, plus fully managed HTTPS certificates and protection against distributed denial-of-service attacks. For enterprise clients, Pantheon offers an extensible, SLA-backed product with a unified dashboard for role-based site portfolio management and support for security assertion markup language (SAML), and Upstreams, a workflow that packages custom code, themes, and open source components into a desired starter that can be used to quickly spin up a new site.

“Pantheon is quickly becoming the go-to WebOps platform for forward-thinking web development teams and agile marketers who are seeking to deliver the world’s best web experiences on Drupal and WordPress,” said Sageview Capital cofounder and managing partner Ned Gilhuly. “Sageview provides growth capital to leading companies with a demonstrated track record of success and compelling market opportunity. Pantheon is a very exciting addition to the Sageview portfolio, and we look forward to providing Zack and his team with financial and operational support to enhance the company’s market-leading position and impressive growth trajectory.”

Pantheon offers three types of hosting subscriptions: Basic, which starts at $50 per month for five domains; Performance, which ranges from $175 to $1,000 per month for 10 to 70 domains; and Elite. It also offers preferred pricing for agency partners, which shaves 30 percent off the cost of all tiers.