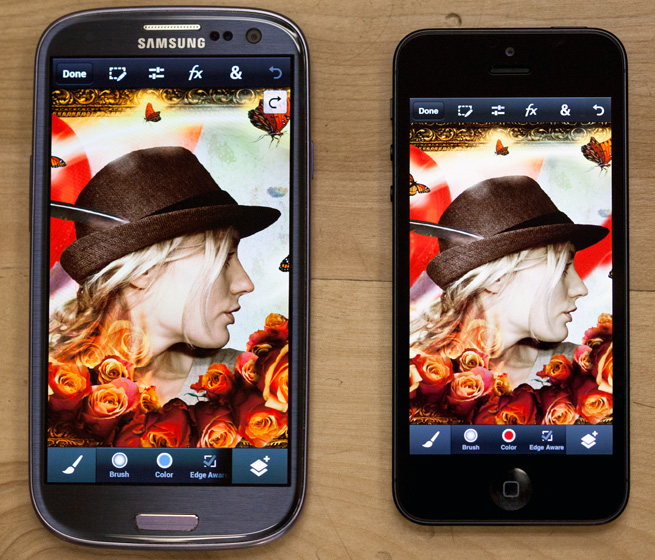 At long last, Adobe has launched Photoshop Touch for the iPhone and Android phones in a bid to make its flagship photo-editing software available across the most popular smart devices in the world.

“This will bring the power of Photoshop to millions of people worldwide,” Photoshop product manager Stephen Nielson told VentureBeat. “My phone is the device I always have with me so I can be creative no matter where I am.”

Adobe has offered Photoshop Touch for iPad and Android tablets since October 2011, showing its willingness to make its powerful software available outside traditional PCs. That application has been quite popular — it made Apple’s Top Apps of 2012 list, and the latest version of it on the iPad has an average rating for four stars.

But smartphones are much more ubiquitous than tablets, and if Adobe truly wants to be part of the mobile conversation, it needs to have a presence on the iPhone and popular Android phones. Adobe previously only offered an extremely minimal app called Photoshop Express for iPhone and Android phones, but it did not encompass all the features a regular Photoshop user might want.

Photoshop Touch for iPhone and Android does at least offer some satisfaction for those that thought Express wasn’t up to snuff. It lets you do a lot of what you do in Photoshop Touch on the iPad and Photoshop on the desktop. It’s simple to start new projects, and popular tools like layers, levels, cropping, clone stamp, adjustments, and filters are all right there in the app and relatively easy to access and control with your fingers.

One especially cool feature is the ability to shoot a picture from your camera and have that automatically placed as a layer in your project. So if I was in the middle of a project on my phone and happened to be sitting in a park, I could see a live camera feed behind my layers, take the right shot, and then I can have a snazzy tree-and-grass background.

The app is also designed to be part of Adobe’s Creative Cloud, so you can start a project on the iPhone or Android and then work on it from a different device like the iPad or your desktop computer. Creative Cloud offers users 2GB of free storage so you can have one folder available everywhere for photo projects.

Maybe most importantly, it’s easy to share your photo projects from the iPhone version of Photoshop Touch on Facebook and Twitter through the built-in iOS integration. To share a project on Instagram — one of the most popular photo-sharing apps out there — you’d need to save your photo to the iPhone’s camera roll and then select it from there inside Instagram. Thankfully that’s not too hard.

“I myself use Instagram all the time, but sometimes I’ll use Photoshop Touch to touch up a photo,” Nelson said. “It doesn’t have to be one or the other.”

Nelson said that Adobe not only wants to make this a fulfilling experience for the Photoshop faithful but also use this as a point to introduce some new users to Photoshop.

“On the tablet version, we’ve seen a lot of creative professionals and photographers using it, but there are also a lot of aspirational Photoshop users too,” Nelson said.

Adobe has made this a powerful application that needs a lot of processing power. So the app only runs on the iPhone 4S, iPhone 5, and Android phones running version 4.0 (Ice Cream Sandwich) or later. This clearly limits the number of people who will be able to use it (think of all the iPhone 4 users out there), but Nelson said the experience has to be good to live up to the standards of Photoshop.

Photoshop Touch will cost $5 on both iPhone and Android. Here’s a full list of features from the iOS app (the list is almost the same on Android):

• Use popular Photoshop features, such as layers, selection tools, adjustments, and filters.
• Improve your photos using classic Photoshop features to bring out the best in your photography. Apply precise tone and color adjustments to your entire composition, a particular layer, or a select area.
• Create something other-worldly using painting effects, filter brushes, and more.
• Make your images pop with graphical text. Apply strokes, add drop shadows and fades, and more.
• Take advantage of your device’s camera to fill an area on a layer with the Camera Fill feature.
• Quickly combine images together. Select part of an image to extract just by scribbling with the Scribble Selection tool. With the Refine Edge feature, use your fingertip to easily capture hard-to-select image elements, like hair.
• Start a project on your iPhone or iPod Touch and finish it on your iPad or back in Photoshop at your desk using a free membership to Adobe Creative Cloud. Your projects are automatically synced between your devices.
• Free membership to Creative Cloud provides 2GB of cloud storage.
• Work on high-resolution images while maintaining the highest image quality. Images up to 12 megapixels are supported.