Connected doorbell startup Ring has launched a brand new version of its security-focused video device, one that promises higher quality video and makes it easier for users to recharge their battery.

Up until now, Ring has offered two versions of its video-enabled doorbell — the $179 Video Doorbell and the $249 Video Doorbell Pro. The latter offers a number of advantages over the cheaper incarnation, including 1080p HD video (compared to 720p) and interchangeable faceplates. However, the Video Doorbell Pro has to be hardwired into an existing doorbell, whereas the cheaper version sports a built-in rechargeable battery and can work on any home out of the box.

With the Ring Video Doorbell 2, the company has cherrypicked features from both existing doorbells and thrown in some new smarts for good measure. The Ring Video Doorbell 2 comes with 1080p HD video for clearer recordings and streams and includes interchangeable faceplates similar to the Pro. But unlike the Pro, it can also now work from a battery, though the user can still elect to hardwire the device if they wish. Moreover, the rechargeable battery is also removable, unlike that of the original Ring Video Doorbell, meaning homeowners or tenants unable to hardwire the doorbell can purchase a spare battery for use while the other one charges.

Previously, a user would have to remove the whole device from the house to charge it, but now they can just pop a little button and take the battery out. 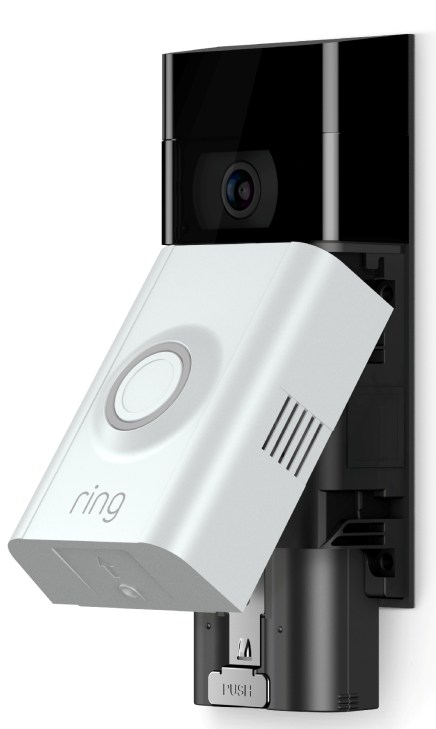 Now that the Ring Video Doorbell 2 offers 1080p HD video and the flexibility to work off a battery or be hardwired, is the Pro obsolete? No — the extra $50 you pay for the Pro gets you a number of additional perks, such as a slimmer unit, the ability to connect to 5.0GHz Wi-Fi networks, customizable motion detection zones, and four changeable faceplates (rather than the two that ship with the Ring Video Doorbell 2).

We first covered Ring way back in 2013 when the company was known as Doorbot. At the time, the startup just offered a doorbell equipped with a Wi-Fi-connected camera, but since its rebrand in September 2014, Ring has boosted its offering with new products and features, including Ring Chime, motion-detection technology, solar panels, standalone security cameras, and a cloud video-storage service.

Ring has raised around $210 million in outside funding, including a hefty $109 million round earlier this year, and it counts some notable backers, including Richard Branson, Qualcomm, Goldman Sachs, and Kleiner Perkins Caufield & Byers.

Ring previously told VentureBeat that it has 1,000 employees across eight countries, and its products are on sale in 100 countries in 15,000 retail locations. The Ring Video Doorbell 2 goes on sale today through all existing Ring retailers, including Best Buy and Home Depot.