A hardware-based music-streaming service that only works through your TV? That’s exactly what Electric Jukebox brought to market in the U.K. last year. And now, it’s coming to the U.S. too.

Backed by big names such as Robbie Williams, Sheryl Crow, Alesha Dixon, and Stephen Fry, the original Electric Jukebox was met with derision in some quarters, but its celebrity endorsements were enough to prick the media’s ears when it was first announced at a glitzy event back in 2015. The initial preorder phase that kicked off at that time — and which actually included the U.S. too — was eventually shelved and the product was delayed by a year due to licensing arrangements. The U.S. was pulled from the eventual 2016 launch too.

The Electric Jukebox could perhaps be compared to something like a Roku or Amazon’s Kindle Fire TV stick. It was a little dongle that you plugged into your TV, linked up to your home Wi-Fi, and then controlled the on-screen interface via a remote control, which also has a built-in mic for voice search. The ultimate goal was to bring music streaming to the masses by sidestepping mobile devices and putting it front-and-center in your living room. 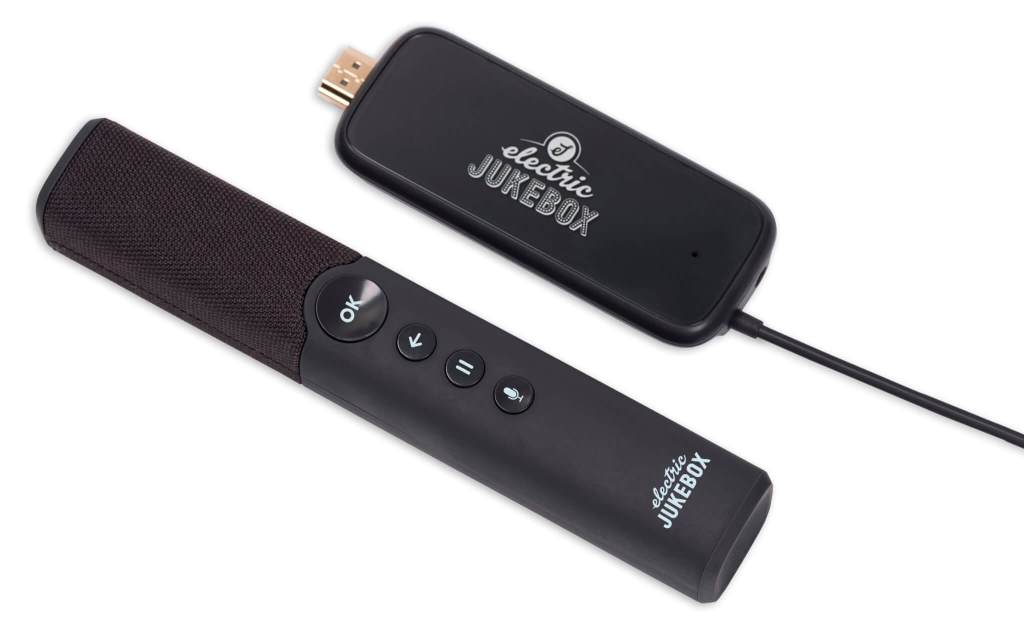 Fast-forward another year and Electric Jukebox has its second product ready for market, launching in the U.S. and the U.K. this week.

The Roxi (styled as “ROXI”) builds on the original Electric Jukebox device by selling itself as “full home entertainment system,” with a tagline of “music at home should be for sharing, not headphone wearing.”

Similar to the Electric Jukebox, the Roxi is pitched as a family-friendly alternative to the likes of Spotify and Apple Music. But in addition to the 29 million tracks that you can search for, it also has karaoke-style singing features, music games, global radio stations, and more.

The setup consists of two units: the Roxi Hub, which plugs into your TV and works over Wi-Fi or ethernet, and the Roxi Controller, a Wii-style gesture-based controller with a built-in microphone for voice search and singing along.

As you can see, version two of Electric Jukebox’s hardware has changed significantly — gone is the dongle and in comes something more akin to a set-top box. The mic / controller looks roughly the same, but things have been revamped under the hood of both the box and the controller to cater to budding karaoke stars, such as reverb capabilities and “karaoke-grade communications” to minimize latency.

Curiously, the company is now referring to the first Electric Jukebox device as a “beta product,” but from what we recall, it wasn’t sold as a beta product at the time. But we digress.

While most music-streaming services adhere roughly to a $10 per month subscription-based model, the Roxi has its own dedicated piece of hardware, meaning it takes a different approach. The suggested retail price (RSP) is $199 up front, and with that you get a one-year Premium Music Pass. Once the year is up, you’ll pay $52 for each year thereafter, which seems pretty good given the equivalent on Spotify would work out at $120 per year.

Digging down into the numbers, this means that you’re paying the equivalent of around $16.60 per month for the first year, and thereafter you pay the equivalent of just $4.33 each month. It’s also worth noting here that in addition to a music catalog comparable to the likes of Spotify or Apple Music, you get all the aforementioned add-on services such as karaoke and music trivia games. 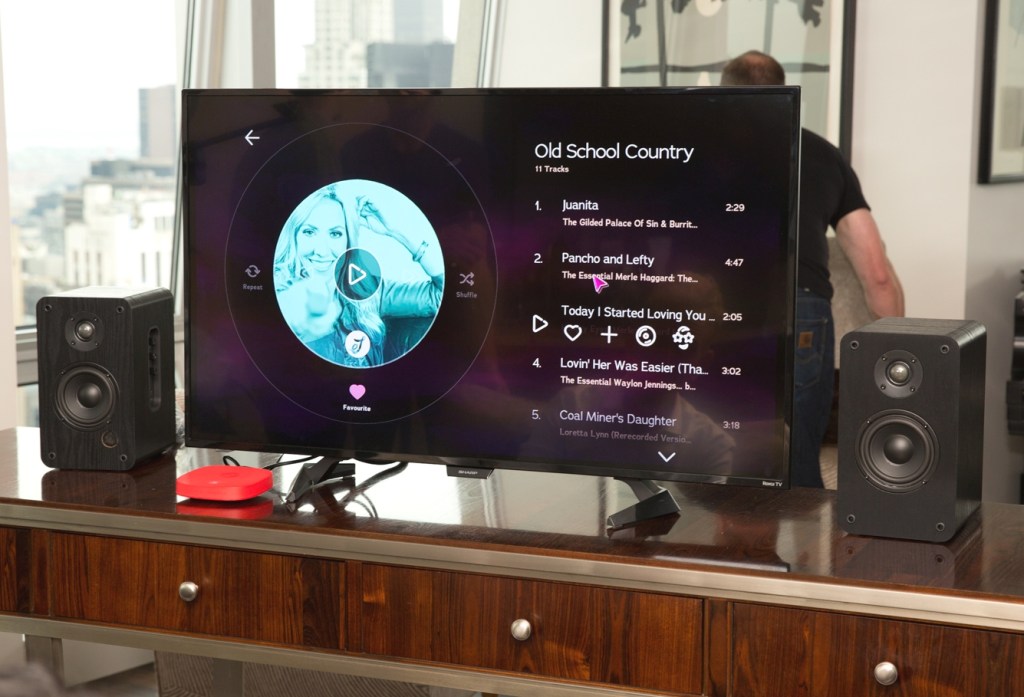 Above: Roxi: on screen

Similar to other streaming services out there, the Roxi also offers a bunch of hand-curated playlists to suit various occasions, and it’s here where the celebrity backers rear their heads — Crow, Williams, Dixon, and Fry have all made their own playlists available through the platform. Why a family would care about music curated by a British wit, comedian, actor, and writer such as Stephen Fry — as genius as he is — isn’t entirely clear. But it is what it is.

Electric Jukebox told VentureBeat that it has so far raised around $14 million in funding, and its celebrity backers are all investors and shareholders in the business too. The company added that it plans to raise more money through an initial public offering (IPO) next year.

If music plays a pivotal part of your social scene at home, the Roxi undoubtedly represents good value for money. But you can’t of course take the Roxi with you without inconveniencing others in your house, and you would have to rely on your destination to have both a TV and internet access. My hunch here is that — for many people at least — the Roxi isn’t something you would buy instead of Spotify, it’s something that would supplement your existing music-subscription service.

And therein lies the problem.

While the Roxi is a great idea and I can see it going down well in many households — family evenings in, boozy get-togethers with buddies, and so on — it straddles a somewhat awkward position where it’s kinda sorta trying to replace both your games console and your music-subscription service, without really being able to replicate many of their benefits. You can’t listen to Roxi on your mobile device, you can’t (easily) take it up to your bedroom, and you can’t listen to it offline. Many games consoles offer music-streaming services (Spotify launched on the Xbox One recently) and karaoke already, though admittedly that setup would probably work out to be a little more expensive over time. But you can buy an Xbox One S for around $250 now, and given the much broader capabilities it offers, I think this factor may detract from Roxi’s appeal for many.

All that said, for families that require a dedicated, focused device designed to get kids away from their isolated worlds of tablets, phones, and consoles, the Roxi will find some fans out there for sure. Indeed, Electric Jukebox actually commissioned a study into 2,000 families with children under 14 years of age, and the results confirmed to the company who its target market really is.

“Our research shows children today spend more than 2.5 times as much time with their iPhones, iPads, and PlayStations, as they do conversing with their loving parents,” explained Electric Jukebox CEO Rob Lewis. “Roxi signifies a step-change as we look to turn the TV into the modern fireplace and bring millions of American families together through the shared joy of music. It’s time for music sharing, not headphone wearing.”

The Roxi goes on sale through electricjukebox.com and other major online and offline retailers on August 18.