Leaking every new product ahead of the official unveiling event has a way of making the formal announcements dull, but that’s what happened with Samsung’s new Galaxy Watch Active and Galaxy Fit wearables: Leaked images preceded names and specs earlier this month, and now the devices have been “revealed” at Samsung’s Galaxy Unpacked event in San Francisco.

As expected, the Galaxy Watch Active is a stripped-down version of Samsung’s flagship Galaxy Watch, packing similar internal hardware into a sleeker and less expensive housing. Offered in silver, black, rose gold, or sea green with plastic bands, Active features a 1.1-inch 360 by 360 screen in a 40mm body that lacks a bezel-mounted dial, instead relying on its touchscreen and two side-mounted buttons for all of its controls.

While most of Active’s features are going to be familiar to users of its predecessor, Gear Sport, Samsung has upped the ante with a collection of improvements. The new watch runs Samsung’s Tizen 4.0.0.3, adding linear acceleration, gravity, and stress monitoring sensors to Gear Sport’s heart rate and step tracking features, as well as adding 1-Amp support for faster recharging. Galaxy Watch Active also includes support for Samsung’s Bixby digital assistant, which can be triggered by saying “Hi, Bixby.”

Interestingly, Samsung says that a research app called My BP Lab will be released on March 15, adding blood pressure monitoring in “beta” form for the U.S., U.K., Canada, Singapore, Australia, and Germany. It’s unclear how the feature will work, but an Android app of the same name uses an optical sensor found on the back of the Galaxy S9 and Note 9 phones to offer the same functionality as a medical research study, requiring a 20-30 second scanning process.

Galaxy Watch Active’s processor is a dual-core Exynos 9110 running at 1.15GHz, paired with 4GB of storage and 768MB of RAM. It includes Bluetooth 4.2, 802.11b/g/n, NFC, and assisted GPS/Glonass location support.

By comparison with the Galaxy Watch, which sells for $330 to $380 depending on whether you need LTE cellular support, the Galaxy Watch Active starts at $200 — a super-aggressive price to challenge the $399 Apple Watch Series 4 and $279 Apple Watch Series 4. Notably, no LTE model has been announced. It will be available starting on March 8, 2019, with a free wireless charging pad as a reward for preorders from February 21 through March 7. 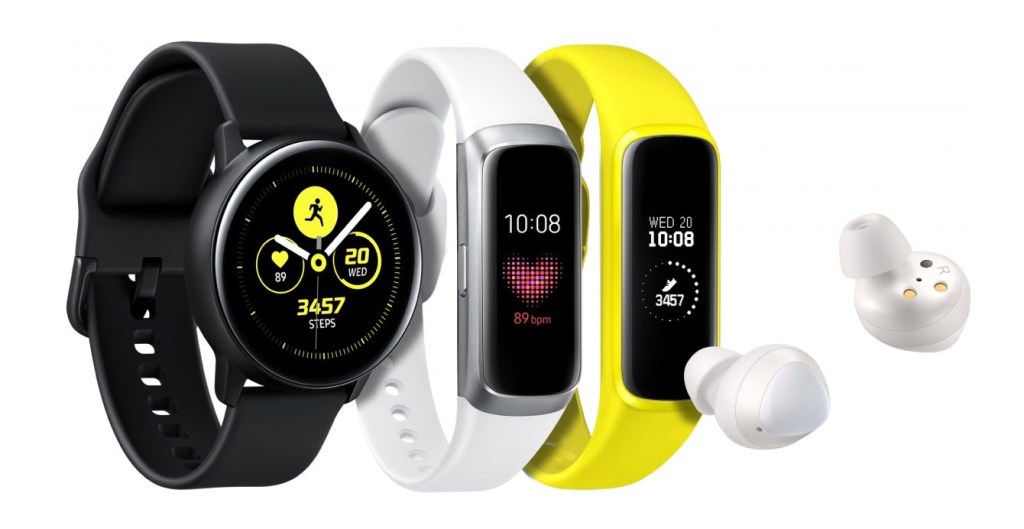 The Galaxy Fit is an alternative if you’re looking for something with more basic health tracking functionality and longer battery life. It replaces the prior Gear Fit 2, a mid-2016 activity tracker with GPS, heart rate monitoring, and barometer features, and 2017 waterproof variation Gear Fit 2 Pro, each of which sported a 1.5-inch-tall 432 by 216 Super AMOLED display, 512MB of RAM, and 4GB of storage.

Arriving in black, silver, and apparently yellow versions, the Galaxy Fit now has a 0.95″ AMOLED screen with a lower resolution of 240 by 120. While including the same amount of RAM as before, it cuts out user storage, but has NFC wireless, Bluetooth LE, and 5ATM water resistance. The Fit also has a heart rate monitor, accelerometer, and gyroscope, promising around a week of run time between charges, even when used for sleep tracking.

Galaxy Fit does not yet have a price, and is scheduled for release in the second quarter of 2019.