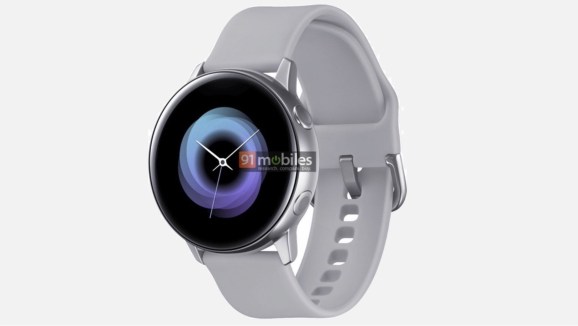 Having impressively redesigned the Gear watch, Samsung reignited interest in the company’s wearables last year with the Galaxy Watch, and rumors of a more affordable model have been circulating for months. Now an image of the smaller wearable has leaked, and though its name remains ambiguous, the new design is definitely a stunner.

Whether it’s called the Galaxy Active, Galaxy Sport, Galaxy Watch Active, or Galaxy Watch Sport, the new watch (via 91mobiles) appears to be a more than superficial redesign of the Galaxy Watch, with a rounded edge glass screen that extends to the edges of the metal casing and two subtle buttons on the right side. There might be an internal bezel around a smaller display area, as the leaked image only shows graphics in the center of the face, but the overall look resembles a circular Apple Watch Series 4.

Seemingly missing in action is the Galaxy Watch’s rotating bezel, a signature and important navigational element that was included on Samsung’s earlier Gear Sport smartwatch. Removing the metal bezel appears to have made the new watch smaller to accommodate its namesake Active or Sport activities.

Samsung doesn’t appear to have skimped on other materials, as all of the metallic hardware looks nice, with brushed and polished finishes. The image also shows a fairly conventional plastic and metal strap appropriate for sweaty sports uses.

Elimination of the rotating dial could modify interactions with the watch, but other features are likely to be retained, including heart rate and sleep monitoring capabilities, activity and step tracking, plus some water resistance. The device is also expected to have GPS, NFC for Samsung Pay, Wi-Fi, Bluetooth, and Bixby Reminders support, though it remains to be seen whether Samsung will offer an LTE version akin to the Galaxy Watch LTE, which sells at a $50 premium over the $330 Galaxy Watch.

The new Galaxy Active or Galaxy Sport watch is expected to be officially revealed on February 20 at a Samsung Unpacked event ahead of Mobile World Congress. Samsung is also expected to show off lower-end fitness trackers under the Galaxy Fit name, foldable Galaxy and conventional Galaxy S10 series smartphones, and at least one 5G smartphone.