Consumer Physics wowed everyone last year when it announced the Scio, a handheld device that used light to scan food, pills, or plants and tell you the chemical makeup of the object. Now the Tel Aviv, Israel-based company has shown a miniaturized version of the Scio that it is preparing to ship to developers and early supporters of its successful Kickstarter crowdfunding campaign.

A year ago, Consumer Physics raised $2.7 million on Kickstarter to fund the Scio. The device is a handheld spectrometer. That means it is a pocket molecular sensor that uses the power of near-infrared (NIR) spectroscopy to scan physical materials for their molecular fingerprints. It can scan an object and compare it to a growing database of physical objects and see if the scanned object fits within the known signature of similar objects.

With a scan that lasts a few seconds, you can glean the nutritional values of foods, find the identity of pharmaceutical pills, and even test which cup holds Pepsi or Coke. The device shines a light on a sample such as a pill. The light is reflected, and Scio extracts the molecular fingerprint of that sample. It then uses a smartphone or tablet to connect to Consumer Physics’ database of physical matter. When it finds a match, it lets you know. It also gives you the breakdown of the material you have scanned. 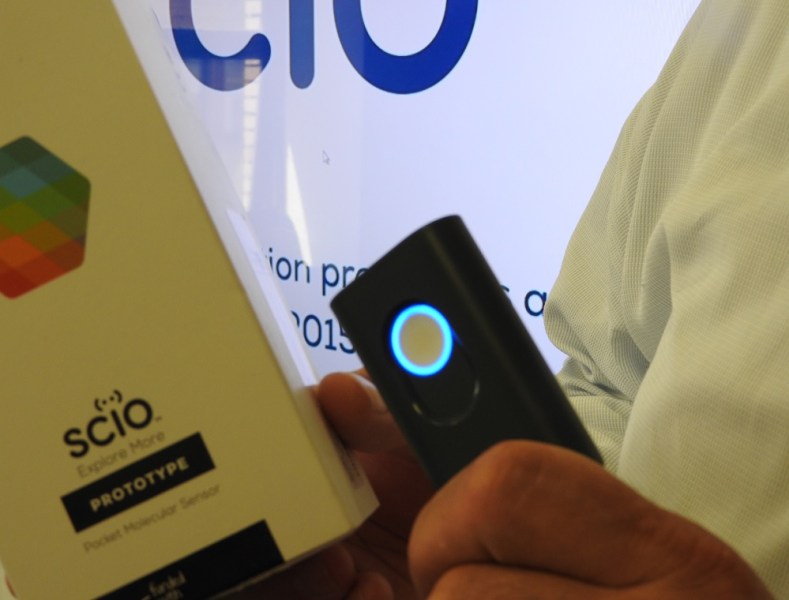 Above: Scio is a handheld spectrometer that can instantly decipher physical objects.

Sharon said the company has been working on the project for more than four years, and he’s glad to see the journey coming to its fruition.

“It has been quite a ride for us,” Sharon said.

Early adopters will soon get their hands on the first units, and that means they’ll be able to develop apps for Scio, or use it to conduct easy and efficient research on the world around us. Kids will be able to use it in classes to quickly scan the makeup of pond water in a biology class, for example, or figure out what their own skin is made of.

The new Scio device is about the size of a couple of fingers. It fits into a case that you use to register the device. And it has a button that shines blue when you’re scanning something. You can see the results of the scan on your smart device.

Sharon said the company got a big turnout for its first U.S. developer conference last month. He expects to ship development kits by the end of summer. The final device is expected to sell for $250.

Consumer Physics has raised more than $10 million via Kickstarter, as well as a round of funding from Khosla Ventures, crowdfunding platform Ourcrowd, strategic investors, and angels. The company has more than 50 employees now, and it is raising another round of money.

“I can’t wait to get this into consumers’ hands to see what they do with it,” Sharon said.