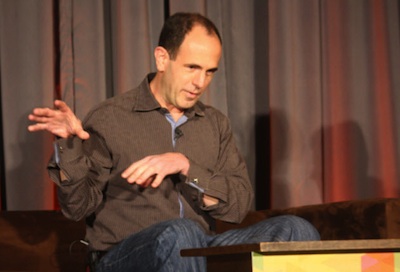 Keith Rabois, a startup veteran who’s now chief operating officer at Square, didn’t mince words today when he talked about the potential of mobile startups. He said “the website as you know it” is “dead, dying, will be dying,” and that the future lies in reinventing Web experiences on the mobile phone.

When you take that approach, the large, eyebrow-raising investments in mobile social startups like Instagram and Color make more sense, Rabois said — they’re not just investments in mobile apps, but in companies that want to reinvent Facebook for the mobile phone. Likewise, Rabois invested in gaming startup TinyCo because it wants to become Zynga for the mobile phone.

Rabois spoke this afternoon at VentureBeat’s Mobile Summit in Sausalito, Calif. When he talks about reinventing for mobile, he said he’s talking about building native applications for specific devices, rather than a mobile website that works on any device. A website is “not going to feel as good as a native experience,” Rabois said.

Facebook chief technology officer Bret Taylor has said that mobile websites built with the HTML5 format, rather than native apps, are “the future platform that we’re going to be looking to.” Rabois said that Facebook’s HTML5 strategy is wrong, and that chief executive Mark Zuckerberg will eventually realize that he needs to build a reinvented mobile app, just like everyone else.

Another point about mobile development from Rabois: It’s not the same as including geo-location features. Yes, geo is one part of mobile, but it’s not the entirety. Rabois said that when he meets with mobile developers, he tells them, “You’re not allowed to think of geo at all. Now tell me why this is different on a mobile experience.”

And of course, Rabois sees Square as another example of this trend: “We’re not a mobile payments company. We’re a company reinventing payments on a mobile device.”