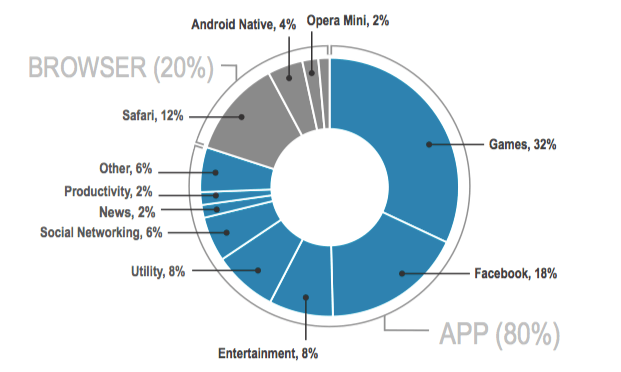 Only 20 percent of American consumers’ time on mobile devices is spent on the web. A massive majority, 80 percent, is spent in apps: games, news, productivity, utility, and social networking apps.

Turns out, it’s an app world, after all.

According to app analytics firm Flurry, which tracks app usage on a staggering 300,000 apps on over a billion active mobile devices, we spend an average of 158 minutes each and every day on our smartphones and tablets. Two hours and seven minutes of that is in an app, and only 31 minutes is in a browser, surfing the old-school web.

A big chunk of that 158 minutes is taken up with games — 32 percent — but it’s almost shocking to see how much time a single app and a single company eats up. Eighteen percent of all the time that Americans spend on their phones is spent in the Facebook app, a figure that by itself dwarfs all other social networking apps.

Combined, the others only take up six percent of our time.

There was a time when developers thought HTML5 would kill the mobile app, with experts like Mike Rowehl saying things like: “We’ll forget that we even passed through another era of native apps on the way to the mobile web.”

In an interesting twist, however, HTML5 is actually being used more as a tool for cross-platform native app development. In fact, it’s now the number one choice for developers building apps for multiple platforms.

Flurry also says that people are now using more apps than ever, launching 7.9 per day in the last part of 2012 versus 7.5 per day in 2011 and 7.2 per day in 2010. Consumers are continuing to try new apps as well, with long-term users adding new apps regularly to their existing stack.

“We believe that with consumers continuing to try so many new apps, the app market is still in early stages and there remains room for innovation as well as breakthrough new applications,” Flurry says.

Is the mobile web dead?

Not necessarily — we’re only five years into this ongoing mobile revolution. But today, people are talking with their taps, and they’re overwhelmingly choosing apps.