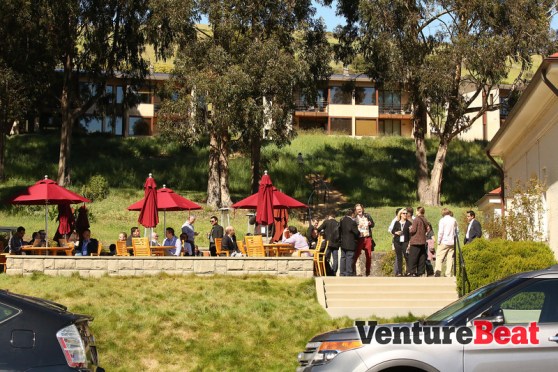 This week’s Mobile Summit, organized by VentureBeat and held at the Cavallo Point resort just north of the Golden Gate Bridge, brought about 200 industry executives together for deep discussions of the mobile technology market.

The event featured a number of boardroom sessions with 20 or so people apiece, focused on intensive conversations around the Summit’s main themes.

I helped facilitate two hourlong discussions on enterprise mobility. Gaurav Tewari, a partner at SAP Ventures, and Scott Davis, the CTO for end-user computing at VMware, led the conversations, which also included top executives from Apperian, Capital One, Cisco, Deutsche Telekom, Ingram Micro, Intel, MasterCard, McAfee, StackMob, TIBCO, and T-Mobile, not to mention an assortment of venture capitalists, a handful of analysts, and one press person (myself).

The conversation provided a good window into what executives are most concerned about regarding mobile tech in the enterprise.

The number one topic, which kept recurring throughout the two hours, was security. In a world of increasing fragmentation, security threats are harder and harder to plan for. Employees want to use the devices of their choice, on the carriers of their choice, with apps that IT managers don’t control. Corporate developers want freedom to choose their app development platforms, languages, libraries — or to develop native apps or web-based solutions. Enterprise apps will have to deal with an increasingly complex environment, where data might be stored locally, on Dropbox, Box.net, Sharepoint, or elsewhere.

“You’re going to have to deal with messiness,” one participant said.

In light of that messiness, security is an anxiety-producing issue. Yes, mobile platforms are by and large more secure than the old, Windows PC-based environment that IT departments have been managing for two decades. But mobile platforms aren’t entirely secure, and given that people are using these devices over insecure networks, they are open to new and extremely dangerous vectors of attack.

Combine that with an environment where international attackers are getting more sophisticated and are going after more economically critical targets (like blueprints and other intellectual property), and it’s clear why enterprise IT leaders are getting very, very nervous.

A more consolidated, overarching security model would help corporations a lot in dealing with this fragmented, complex mobile environment.

A large majority of companies are now bowing to the inevitable and allowing some kind of “bring your own device,” or BYOD, activity, letting employees use the smartphones or tablets of their choice and adjusting the company’s IT tools accordingly.

BYOD, by the way, is not happening because it saves money. (In fact, it might even cost companies more money, thanks to the cost of processing expense reports for monthly telecom bills.) It’s happening “because we can’t stop it,” in the words of one roundtable member.

But, according to another participant, while BYOD is a reality at 80 percent of companies, only 10 percent of companies actually have a spelled-out BYOD policy. (I couldn’t track down figures to support that assertion, but Insight Quarterly has some related data, as does Threat Metrix.)

That’s a problem because employees might not know how to be safe online, what devices to choose, or what consequences they might incur if they use their devices for work. Mobile Device Management (MDM) often gives your IT administrator the ability to remotely wipe your phone — personal data and all — which is something you ought to know before you start using your phone for work.

Apps that do more with mobile devices

Many enterprises are still using mobile devices as little more than tiny, portable terminals to their corporate information systems. Yet smartphones and tablets are capable of so much more. Cameras, GPS devices, accelerometers, and other features that are now ubiquitous in many mobile devices can all play a role in enterprise apps. For example, one speaker talked about a company that created an augmented-reality app for equipment maintenance workers to use. Hold up the phone to a piece of equipment, and the app superimposes information about what that machine is, what its last service date was, and the like. Another speaker described equipping forklift operators with iPads and a customized video-chat app that let them hold the tablet up to a pallet, so the person requesting a delivery could see in real time whether the operator was picking up the right thing.

IT managers who are brokers, not providers

As more companies embrace the flexibility and speed of cloud services, IT executives run the risk of being marginalized. We’ve heard how chief marketing officers (CMOs) are supplanting chief information officers (CIOs), and in many companies, the CMO’s budget already exceeds that of the CIO. One participant in our discussion said he’d seen several CIOs terminated and replaced with CMOs when the former failed to deliver. (Given the security concerns mentioned above, those might prove to be rather shortsighted replacements.)

Mobile tech exacerbates the trend. After losing control of corporate apps to cloud providers, IT managers are now losing control of the most basic tech: the very devices and networks that employees use to get their jobs done.

In the short term, at least, IT executives need to adapt by embracing their new roles as brokers for tech services, rather than the exclusive providers of those services.

They also need to understand their company’s business goals and get ready to move quickly on projects that can drive revenue or cut costs. But that’s always been part of the IT remit, hasn’t it?

Apps for humanity — or at least your employees

Many companies have failed to understand that the best mobile apps aren’t just mobile versions of their existing corporate apps. (More than one person at the roundtables complained about how poorly Salesforce.com works on tablets, for instance.) Enterprise developers creating in-house apps need to understand two things:

First, design matters far more in the mobile universe than in the old desktop world. Smartphones and app stores have conditioned users to expect apps that are simple, slick, fast, and responsive.

Second, you need to make apps work for your employees. If you make apps that improve their lives or help them get their work done, they’ll use those apps. If not, they’ll go around you to find apps that meet their needs.

“Build a great app that helps people do their jobs, and they will use it,” one speaker said.

A simple example: One participant described a company that had some difficulty getting acceptance for its employee-oriented mobile apps. Then it created an app that let employees order food from the company cafeteria. Not something that was essential to the business’s success, of course — but it did help make people’s lives easier. As a result, they used it. What’s more, when they went to the corporate app store to get that app, they noticed that there were a lot of other useful apps there, too, so usage of all the company’s apps rose.

The short lesson: Make something that makes your employees’ lives better.