Tivo is launching a new generation of digital video recorders today that have revamped user interfaces and can record up to six shows at once. The new machines represent one of the biggest makeovers Tivo has ever done for its lineup of television recorders. 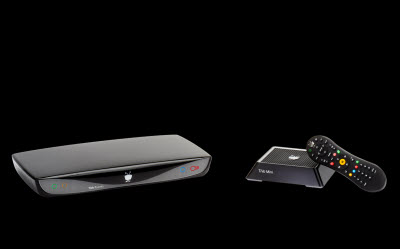 Above: Tivo Roamio with Mini and remote

The San Jose, Calif.-based company pioneered the DVR market and it wants to hold on to that status — and market share. So it’s rolling out two new Roamio-brand digital recorders. With six tuners, Tivo makes it easier to avoid any show scheduling conflicts. Its previous tuner had only four, and many DVRs in the market have the capability to record just one or two shows at once.

Tivo’s existing Roamio, which can record four shows at once, will be joined by the new Tivo Roamio Plus and Tivo Roamio Pro models, which can both record six shows at a time. The new machines can also update the screen twice as fast as previous models. That means they will be noticeably more responsive, said Jim Denney, the vice president of product marketing at Tivo, said in an interview with VentureBeat.

“You can expect everything to be 1.5 times to 2.5 times faster,” Denney said. “We want this to be the best way to watch TV.”

Tivo bills the machines as perfect for “true lovers of TV” and offering cable subscribers the complete package in their gadget and user interface features. The new machine can record shows on a hard drive with up to 450 hours of capacity, or 3 TBs of data. Now you don’t have to erase your favorite episodes of The Mary Tyler Moore show to make room for Modern Family. Or whatever.

Users will also be able to access their recordings wherever they roam. Soon, Tivo’s app will enable you to stream shows to your iPad or iPhone.

“It’s a nice mixture of local services and the cloud,” Denney said.

Tivo has to keep coming up with new services for diehard TV fans. After all, it competes with everything from a $35 Google Chromecast to the upcoming $500 Xbox One.

Rob Enderle, an analyst at Enderle Group, said that Tivo has a strong position in the independent DVR market. But it will face some serious competition at some point from Intel and Google, and both of those companies have a lot of clout. Smart TVs will also be competitors, since they may be able to perform many Tivo functions without a separate box. Still, Enderle thinks Tivo has a good solution.

“I think we are at least a year out from when a streaming solution can provide the same blend of streaming and DVR functionality,” Enderle said.

AT&T currently has a four-tuner box, while DirecTV has a 5-tuner solution.

The number of video sources that Tivo can record is growing. If you’re a cable subscriber, you can record regular cable channels like HBO, NBC, or ESPN, but you can also record shows on streaming services such as Netflix, Hulu, YouTube, Pandora, Spotify, and Amazon Prime. Denney said that the box is like putting a Roku, Apple TV, Slingbox, Google TV, and cable DVR into just one box. When you come upon a show you want to watch, Tivo will display all of the various ways you can watch that show and you can choose which service to use.

You can personalize your dashboard. (But you can’t divide your household’s dashboard into multiple family member accounts). When you turn on the TV, you’ll see a visual user interface with your favorite shows, channels, and other preferences. The service makes searching easier, letting you find upcoming episodes, reruns, or seasons of a favorite show on streaming services or on your cable video on demand. You can find and play everything your favorite film star is in.

The user interface at Tivo Central has subheadings such as My Shows and What to Watch Now. The latter shows all currently playing content that interests you. You can quickly browse through lists such as the “top 20 sports shows” on at any moment. You can look for shows as vague as “movies” or as specific as “romantic comedies.”

You can automatically record Emmy Award winners, Sundance Film Festival award winners, and others with the press of one button. Roamio can deliver recorded shows to the screens in multiple televisions in the home or out of the home to tablets and smartphones.

Denney said a better remote will have an RF connection, enabling Roamio devices to be placed behind closed cabinets or in another room altogether. You no longer need a line of sight to operate your TiVo. Tivo even has a few games, including Quiz Master, Rockswap,  and Blackjack.

The Roamio base model can record over-the-air HD content if it is paired with an HD antenna. Overall, to get up and running, you need power, Ethernet (or WiFi), CableCard or HD Antenna for the base model. You also need Coax cable and HDMI.

You can expect to hear a lot about the new machines since Tivo will make a lot of noise about the new boxes. It has a seven-figure ad budget. 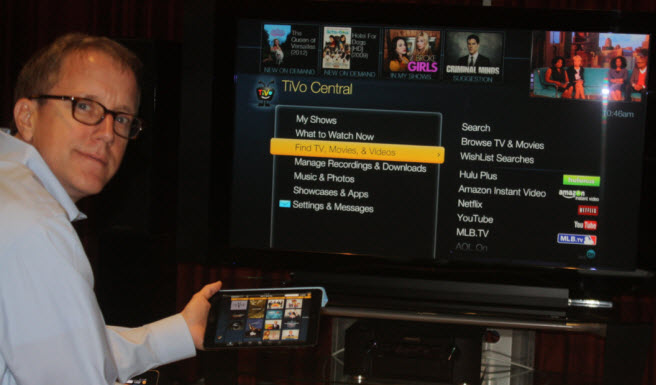 Above: Jim Denney at Tivo.