Terms like 3G, 4G, and 5G draw definitive lines in the sand between one generation and the next. In reality, the transition is far more gradual. And because what we call 5G comprises many capabilities, it’s becoming clearer that the technology will affect our lives in different ways, ramping up in magnitude over time.

Ultimately, 5G’s gigabit-class throughput, ultra-low latency, ultra-high reliability, and data-centric infrastructure will make it possible to apply artificial intelligence at an unprecedented scale. It’ll improve the flexibility of cloud computing, while creating new opportunities at the edge. And it’ll pave the way for a larger number of broadband IoT devices, which will account for almost 35% of cellular IoT connections by 2024. Just in the media industry alone, new services and applications enabled by 5G are expected to generate a cumulative $765 billion dollars between now and 2028.

While the adoption of 5G won’t be as simple as flipping a switch, we do have some sense of the transition’s pace. If the merger between T-Mobile and Sprint goes through, 97% of the U.S. population is promised some form of 5G service from the New T-Mobile within three years of that deal closing, including 85% of folks in rural areas. The union of T-Mobile and Sprint also sets forth a plan to establish Dish Networks as a fourth major wireless carrier alongside AT&T and Verizon, serving at least 70% of the U.S. population with 5G by June 2023.

Between now and then, 5G access will continue rolling out in the densest areas and municipalities friendly to the technology’s infrastructure requirements, according to a report published by cloud-delivered wireless edge solution provider Cradlepoint. Ericsson’s June 2019 Mobility Report forecasts 10 million 5G subscriptions worldwide by the end of 2019. A faster uptake compared to LTE may result in as many as 1.9 billion 5G subscriptions for enhanced mobile broadband by the end of 2024.

So does that mean you should hold off on upgrading network infrastructure until 5G coverage is widespread? Not necessarily. In the same report, Ericsson projects the continued growth of LTE, culminating in a peak of 5.3 billion subscriptions in 2022. There is no doubt that LTE and 5G networks will operate in concert for years to come.

Best of all, there’s a pathway to 5G that promises much of the technology’s value on existing 4G LTE networks. As you run up against applications begging for gigabit-class data rates and single-digit-millisecond latencies, a handful of informed upgrades may be all you need to bridge the gap between what’s available now and full 5G coverage across your WAN. 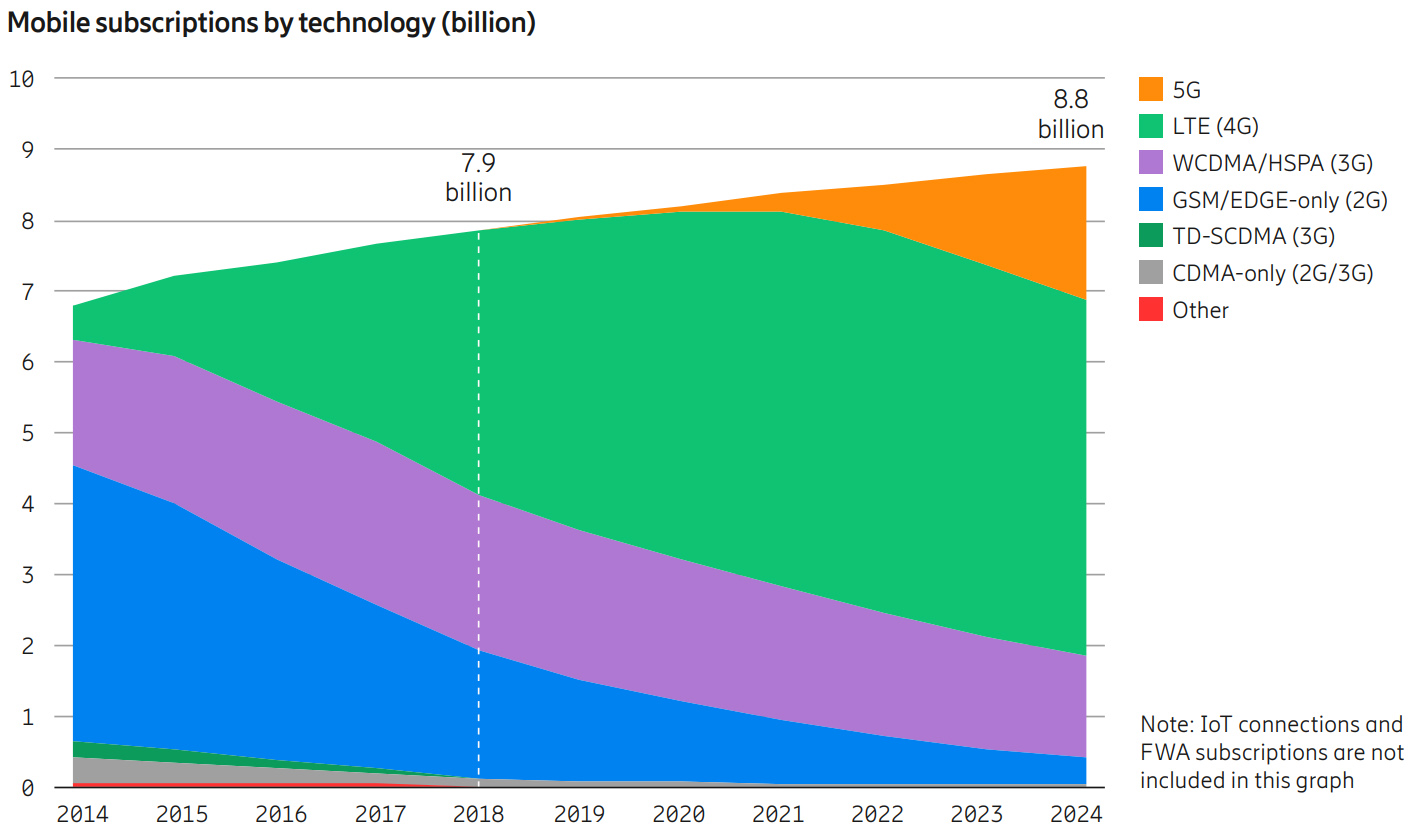 Above: A 5G subscription is counted as such when associated with a device that supports New Radio (NR), as specified in 3GPP Release 15, and is connected to a 5G-enabled network

How is 5G happening today?

Before we explore what you can do now, let’s talk a little more about how the technology is rolling out today. 5G is being used to describe many different capabilities, frequency spectrums, and even use cases. They won’t all be possible, or even desirable, across 5G-capable devices or on 5G networks. This is by design, though.

Verizon, for example, is focusing on the 28 GHz and 39 GHz frequencies, commonly referred to as millimeter wave, to achieve big throughput and low latency. However, the limited range of those signals can be problematic, even in the dense urban areas where Verizon already offers 5G service.

“You need to have four antennas, each on a different plane, to provide the optimal line of sight connectivity to a 5G millimeter wave tower,” explained Todd Krautkremer, CMO at Cradlepoint. “Then you need some form of installation assistance, perhaps an application, that helps customers optimally position that device. It is also likely that you need an outdoor modem that mounts on a pole or side of a building to ensure you can get connectivity since millimeter-wave signals often struggle to penetrate low-emissivity-glass, for example.

Sprint is using excess 2.5 GHz spectrum with massive MIMO antenna systems previously deployed to upgrade its LTE service. That’s going to make it easier for the company to reach more customers, albeit at lower data rates. In fact, Verizon suggests a reliance on mid-band spectrum is going to make a lot of 5G approximate “good 4G service.”

Similar to Verizon, T-Mobile is licensed for millimeter wave spectrum in the 28 GHz and 39 GHz bands. It’s also working to expand coverage with 600 MHz low-band 5G. A merger with Sprint would give both companies access to resources across the range of frequencies used by 5G systems.

5G’s other use cases will take time to bake

Beyond the enhanced mobile broadband and fixed wireless access popping up in urban markets, the benefits of 5G will also make it possible to guarantee ultra-reliable low-latency communications (URLLC) for robotics, safety systems, autonomous vehicles, and healthcare. 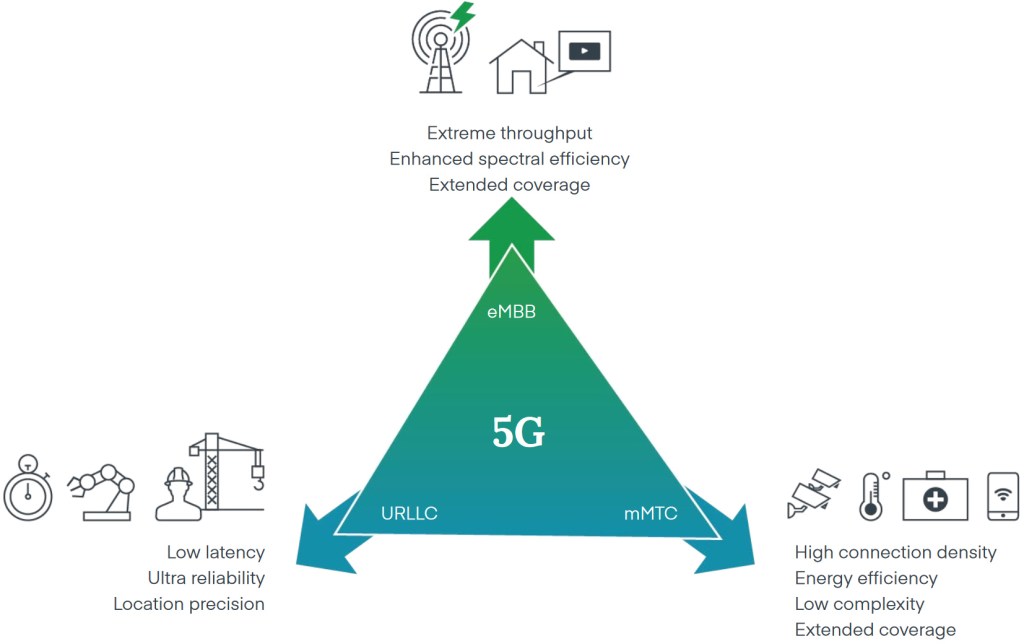 Above: 5G use cases

This second service category defined by the International Telecommunication Union presents a unique set of challenges since low latency and high reliability are often at odds with each other. But URLLC services are designed to take priority among the other 5G use cases. They relax the emphasis on raw throughput with shorter messages, more intelligent scheduling, and grant-free uplink access, eliminating latency that previously went into preventing interference from devices transmitting at the same time.

A third use case, massive machine-type communication (mMTC), promises connectivity to dense swathes of sensors that aren’t necessarily bandwidth-sensitive. They do, however, require low power consumption, low cost, and reliable operation in a sea of heterogenous devices operating on the same network.

5G’s eMBB service category looks a lot like an evolution of 4G, paving the way for higher throughput and more efficient use of available spectrum. The URLLC and mMTC classes are all about the Internet of Things (IoT), where machines, sensors, cameras, drones, and surgical tools interoperate in new and exciting ways. For some of these devices, the 99.99 reliability of 4G LTE systems]  is insufficient. Others stand to benefit from 5G’s non-orthogonal multiple access (NOMA) technology, supporting more devices in a given area than existing low-power wide area networks.

The eMBB-oriented version of 5G available today, referred to as the non-standalone architecture, allows carriers to use existing network assets to introduce 5G spectrums and boost capacity. It’s not the version that’ll eventually power our smart factories and connected cars, but it does help bridge today’s reality and tomorrow’s opportunities, which are going to require lots of infrastructure work.

Standalone 5G, with its cloud-native 5G Core and network slicing functionality, is foundational to enabling the technology’s three use cases. This next phase of 5G is an eventuality—no doubt about that. But it’s still in a testing phase and won’t even begin rolling out until 2020. Preparing now will make the transition easier and help you get more ROI from your existing WAN.

Getting the benefits of 5G in an LTE world

Realizing the full 5G experience isn’t going to involve flipping a switch that makes all three use cases viable simultaneously. In fact, a lot of the features integral to 5G are already components of the latest LTE standards. It may be the case that performing an upgrade today will help with a move to 5G tomorrow.

“…gigabit-class LTE services really represent, I would say, almost 5G version 0.5, because they start to incorporate many of the same foundational technologies as 5G,” said Cradlepoint’s Krautkremer. “For example, capabilities like 256-QAM—a modulation technology, which is, ‘how the carrier can stuff more bits down a single piece of spectrum.’ And 4×4 MIMO, which is, as we know from the Wi-Fi world, ‘how can I get more bits in the air from the edge device to the tower.’ Then we have carrier aggregation or CA, which takes us back to the inverse multiplexing days of, ‘how do I take several pieces of spectrum and combine them together to act like one larger piece of spectrum?’ By leveraging these technologies within gigabit LTE, carriers are now able to deliver 150, 200, even 400 megabits per second of fixed wireless and mobile connectivity on LTE networks.” 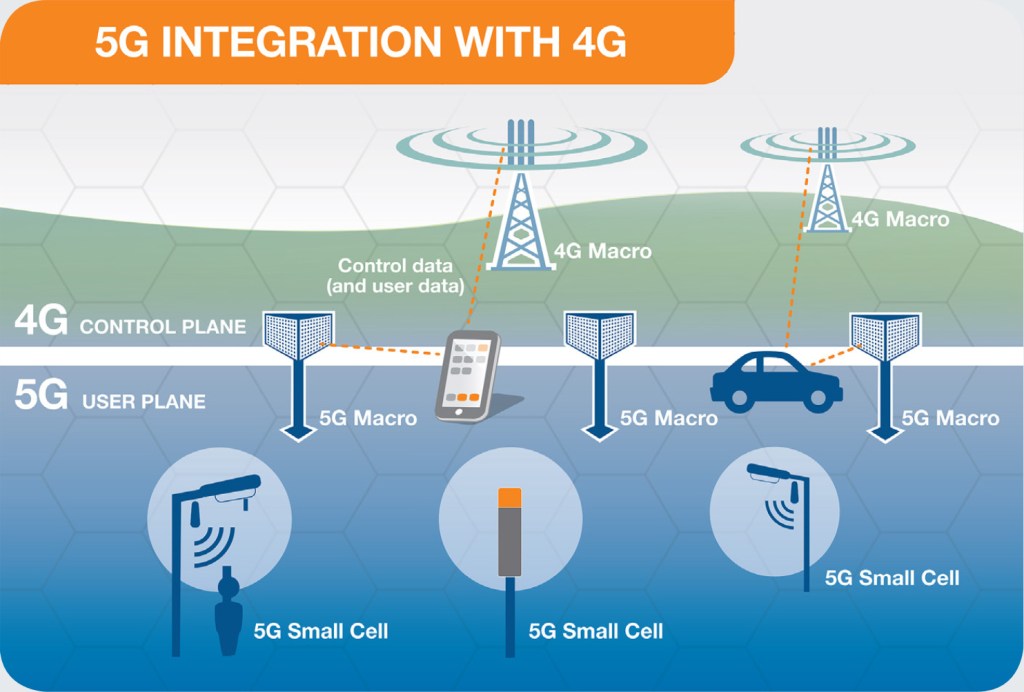 Above: When a 5G connection is established, the User Equipment (or device) will connect to both the 4G network to provide the control signaling and to the 5G network to help provide the fast data connection by adding to the existing 4G capacity.

It’s going to take some time for carriers to achieve meaningful densification of millimeter wave radios, to get their backhaul ready for 10 gigabits of wireless traffic, to refarm 3G and 4G spectrum, and to roll out multi-access edge computing for lower latency. Businesses waiting for all that need more connectivity, to support video, backup, or more endpoints. Rather than waiting for 5G to cover their entire footprint, current 4G solutions are providing an intermediate step.

Krautkremer continued, “The beauty of it is, now that 4G is being upgraded to have more 5G-like performance capabilities with gigabit LTE, and 5G is starting to deploy, companies like Cradlepoint are telling customers, ‘look, we’ll put you on the pathway to 5G so you can get 80% of the value of 5G today on a 4G gigabit LTE network for existing applications that need faster fixed wireless and mobile speeds.’ And then, as 5G becomes available in your network footprint and you want to take advantage of it, we’re developing and collaborating on solutions—whether it’s millimeter wave, mid-wave, or low-band—that will preserve your investment in your existing router infrastructure and gives you access to 5G when and where you need it.”

The preservation Krautkremer is talking about comes from network functions virtualization (NFV) and a software-defined architecture. These concepts are integral to the deployment and management of 5G networks. They complement each other, enabling variable 4G LTE or 5G workloads using common hardware. That means taking an off-the-shelf Xeon-based server and virtually spinning-up network services that would have previously required single-purpose devices and many months of work to deploy.

According to a white paper published by A10 Networks, some of the smartest investments you can make into an existing 4G network involve software technologies that also lay the foundation for a 5G upgrade. Improved network management tools are listed as the single-most logical and cost-effective place to start. A management and orchestration (MANO) framework, for example,  gives you the flexibility to deploy services as they transition from physical appliances to virtual machines. Compute, storage, and networking resources become much easier to move and manage.

The distinction often made between 4G and 5G implies that there’s an impending Big Bang event poised to spread next-gen coverage far and wide. In reality, the transition is going to happen slowly, neighborhood by neighborhood, city by city. In the meantime, LTE and 5G will coexist. Some of today’s most popular modem-RF systems make that much clear. In today’s non-standalone version of 5G, which uses the control plane of existing LTE networks, they have a connection to the 4G and 5G networks at the same time, allowing you to dip in and out of 5G coverage without interrupting service.

“It really makes the point that 4G and 5G infrastructures are going to be around for a long time, concluded Cradlepoint’s Krautkremer. “And that’s why carriers are upgrading their 4G infrastructure, to reduce the differential of capabilities between 4G and 5G so that they can be more harmonious together than we’ve seen in any previous evolution of wireless technology.”