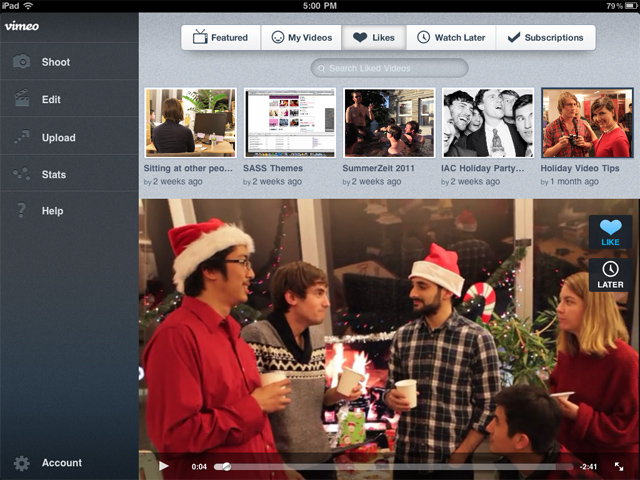 Vimeo’s launch of the apps at CES 2012 shows the company is getting much more serious about mobile. Joe Schmitt, Vimeo’s head of mobile, told us that the percentage of mobile-based site traffic has doubled in the last year. He said Vimeo’s total traffic coming from mobile was at 7 percent in Jan. 2010 and that now sits at 15 percent.

The company previously just had an iPhone app and a mobile site for other smartphones, and while that’s a good start, it’s not enough. Native apps almost always provide the best possible experience on a smartphone or tablet versus HTML5-based mobile sites. Thankfully that’s not a problem any longer with the new Android app (which is optimized for smartphones and tablets) and a new Windows Phone 7 app. Both of those apps are available to download now from the Android Market and Windows Phone Marketplace, respectively.

Vimeo also designed its Android tablet app so it will be available through Amazon’s Android Appstore, which means it will work for the seemingly popular Kindle Fire. The Fire may already be the number 2 tablet after the iPad in the U.S. and likely cut into iPad sales this past holiday season, so it’s a smart move for Vimeo to target that device as well.

On the iOS front, an updated iPhone app and brand-new iPad app are on the way. The iPad app is especially important because that device is tailor-made for media consumption. Schmitt expects they will be ready for release by the end of January.

Vimeo has been owned by IAC, which also owns companies like Match.com and The Daily Beast, since August 2006. The company doesn’t reveal subscriber numbers, but it has more than 8 million registered users. It attracts 58 million unique users per month, and that doesn’t include embedded views across the web.

A gallery of the new and updated apps can be viewed below: