The Norwegian startup, which launched its browser for desktop machines back in 2016, announced plans for an Android app earlier this year. In the intervening months, Vivaldi has been testing the app among 100 or so alpha users, and today the app graduates into a public beta, available to download now through Google Play.

By way of a brief recap, von Tetzchner cofounded Opera Software — the creators of the popular Opera browser — in 1995, and served as the company’s CEO until 2010. In 2014, von Tetzchner founded and bootstrapped Vivaldi Technologies with a view toward creating a feature-rich browser that users can personalize to their own needs without relying on extensions or add-ons. At its core, Vivaldi was perhaps more about appealing to power users than a mass market.

The company has previously said it would need 3-5 million users to turn a profit, a milestone it has yet to reach with just 1.2 million users garnered through its desktop application. As such, launching on mobile is obviously a landmark moment for Vivaldi, given that smartphones are a primary means of accessing the internet.

“Initially, we worked on desktop and mobile concurrently, but we found issues with that approach,” von Tetzchner told VentureBeat. “Thus we decided to launch desktop first with mobile following. The mobile release should help a lot [to grow its users]. Our long term goals are clearly higher than the required 3 to 5 million, as we will then have funds to grow the company further.”

While Vivaldi is largely funded privately, with no external backers, the company is quick to stress that its business plan does not center around advertisements or tracking users — so far it has made money through striking deals to pre-install search engines. In the U.K., for example, Microsoft’s Bing is the default search engine, though users can easily change this. The company also makes some money from some of the pre-installed bookmarks it includes.

“Our business model is not ad-based and does not include tracking,” von Tetzchner continued. “We still believe that having free content on the web is a good thing, that content can be ad-based — although we strongly believe that the tracking should be made illegal.”

There are, of course, countless Android browsers out there already, from Chrome and Firefox through to Opera and Microsoft Edge — not to mention many other independent incarnations. But Vivaldi is pitching its offering as a full-featured browser that hasn’t crimped any of its core features en route from desktop to mobile.

Available for Android 5.0 (Lollipop) and over, the new Vivaldi app is explicitly referred to as a “continuation of the desktop experience.” This means that Vivaldi for Android has many of the same tools of its desktop brethren, including so-called “panels” on the bottom left-hand side that serve up quick access to features such as bookmarks, browsing history, and downloads. There is also a customizable “speed dial” tool with shortcuts to a user’s favorite websites from a single page. 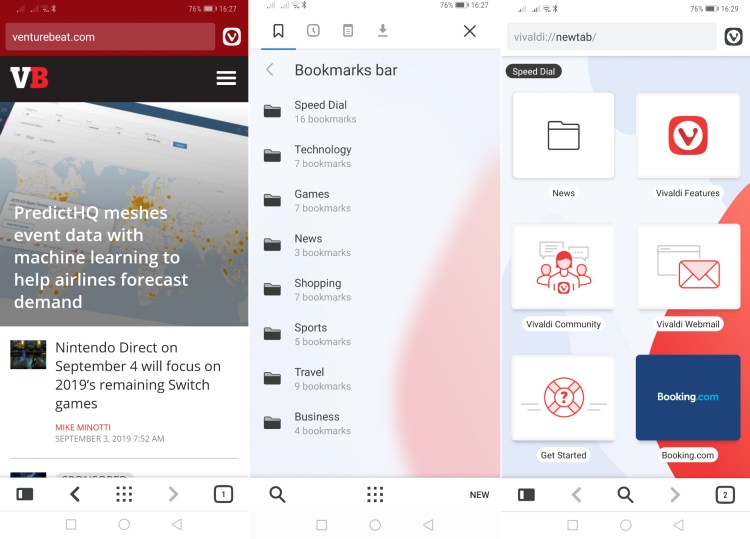 Panels also create a direct artery to a note-taking tool, with users able to make quick reminders for themselves. This, alongside all the other browser settings, can be synchronized across platforms when a user chooses to sign in. 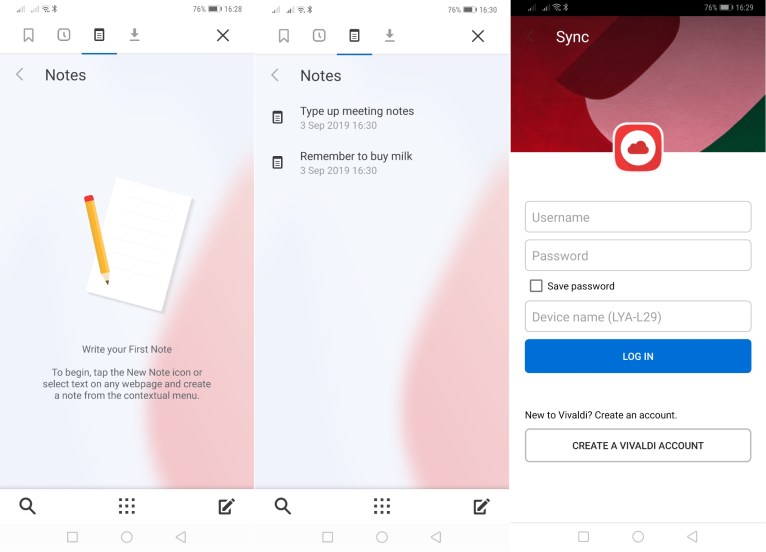 Above: Notes and cross-platform syncing

Though there are plenty of to-do list and note-taking apps for Android, by baking this directly into the browser as a native feature, Vivaldi is pushing productivity as a core selling point of its browser — users don’t have to switch between apps when browsing the web to take some quick notes.

“True innovation is only possible through an open, collaborative approach,” von Tetzchner noted. “That’s the relationship we share with our users. We’re working closely to develop a browser that they call their own — a browser that will help them to be efficient anywhere — on any device.”

So far, so fine — Vivaldi, on the surface at least, doesn’t bring any earth-shattering new features to the table. But sometimes it’s not about the big features — it’s about the combination of smaller features that add up to an overall better, and differentiated, experience.

In bookmarks, for example, users can add a description (e.g. keywords) and a nickname, which not only makes it easier to search within the bookmark search function, but also in the main web address bar. So if you’ve included “Madden” in the description for the Electronic Arts (EA) bookmark, for example, then this will show up when searching in the address bar too. 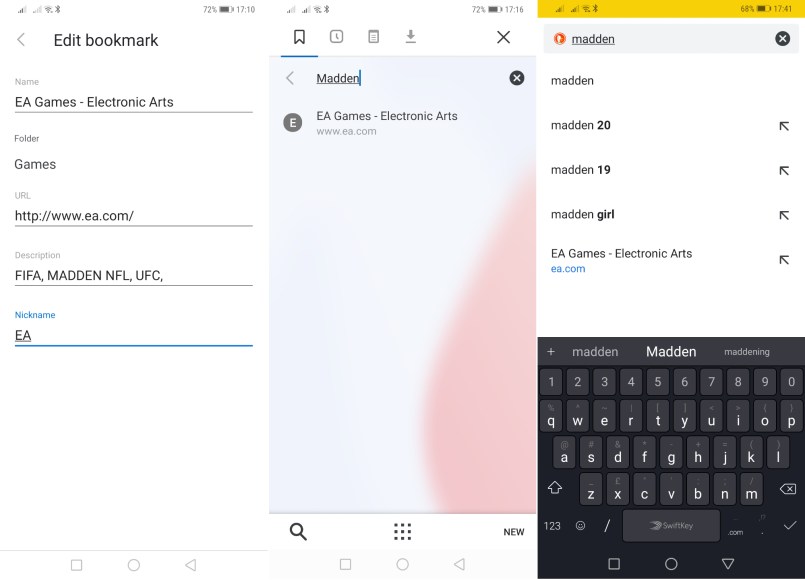 Above: Categorizing and searching bookmarks

Similarly, as with most other browsers, Vivaldi lets you set your default search engine in the settings. However, in an interesting little quirk, the company has automatically assigned each of the search engine options a nickname — the first letter of their name. 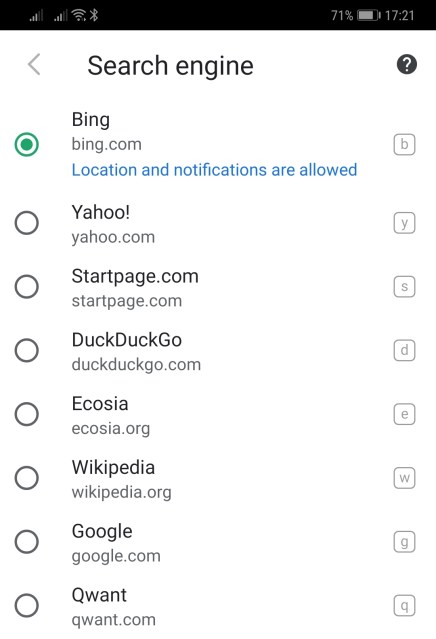 It wasn’t entirely clear what the purpose of these letters were at first, but digging down into the app launch notes reveals that users can change their search engine automatically, simply by typing the first letter of their desired search engine into the address bar at the top, followed by a space.

So, for example, if your default search engine is usually Google or Yahoo, and you want to do a quick private search on DuckDuckGo, then you would type “d” and then “space” and it will then let you search inside DuckDuckGo instead.

Above: Vivaldi: Easy to change the search engine

While a minor feature on the grand scheme of things, this is perhaps of particular note given the heat that Google is currently facing in Europe over the friction it allegedly puts in the way of users in terms of finding and using alternative search engines on Android. Vivaldi, evidently, wants to make it easier to switch between search engines.

“Our UI is all about making the browser as useful as possible for the user,” von Tetzchner said. “This is just one example of that, for the user to be able to quickly change search engines on the fly.”

Elsewhere, there is a built-in screenshot feature that not only enables you to capture what is visible on the screen at that moment, but also the entirety of the web page. This is already possible on Android, but usually requires a third-party app. 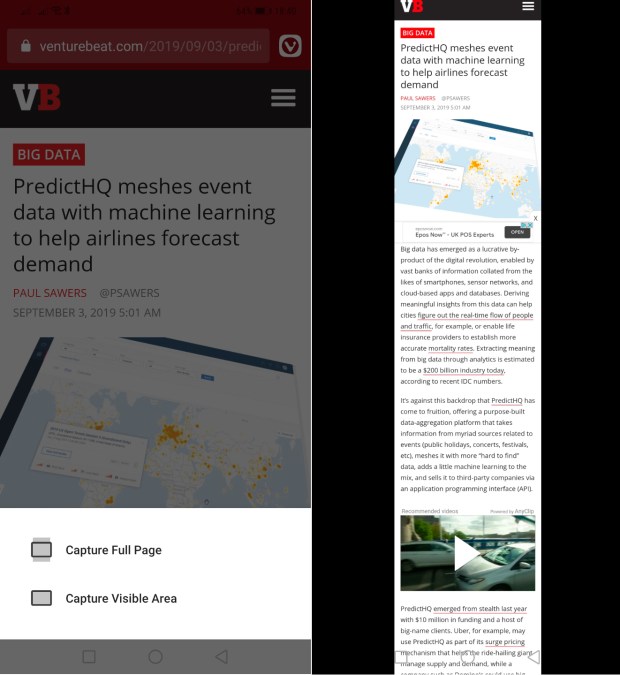 As with the desktop app, Vivaldi has built the Android incarnation on Chromium, the Google-developed open source browser. However, the company is quick to stress that it has developed much of the underpinning code and technology itself, rather than leaning on Google’s — it has built its own sync server, and wants its users to know that it it doesn’t send data to Google. Moreover, data, including passwords, is encrypted on the device itself, meaning that third parties can’t access this information (assuming the user’s password isn’t compromised).

So while Vivaldi has some long-standing big-name and small-name rivals, it thinks it has enough tricks up its sleeve to make a sizable dent in the browser sphere.

“Vivaldi is one of few companies offering both a desktop and a mobile browser,” von Tetzchner said. “We also have an active ecosystem. We have our own sync server and we also provide a free and ad-free web mail and blogging platform through Vivaldi.net. We also build our own browser core, in contrast with many of the mobile browser vendors, meaning we have more control over the code we run.”

There are a bunch more neat features embedded into the app that you (and we) will undoubtedly discover after a while, making Vivaldi’s entry into the mobile world a worthwhile endeavor. But will Google (Chrome) or Mozilla (Firefox) be quaking in their proverbial boots at this launch? Probably not, but that isn’t the point here. The point is to bring a feature-packed, cross-platform browser to market, one that power users — and those looking for an alternative to the long-established incumbents — can employ. Vivaldi isn’t necessarily looking to conquer the world, it’s looking to provide a better option, and it’s not stopping here.

“The browser you choose on your mobile device requires more and more agility to be effective in your day-to-day,” von Tetzchner added. “Vivaldi rises to the challenge. As the way people use phones continues to evolve, we’ll strive to continually innovate, bringing the best possible browsing experience to your mobile devices.”

The remaining elephant in the room here is, of course, Vivaldi’s mobile plans beyond Android. Can we expect an iOS incarnation in the future? The short answer to that is probably, but not for a while.

“The priority at this time is Android — we can reuse code on Android and utilize the same code base,” von Tetzchner continued. “Apple does not allow us to use the same code on iOS, so it requires a lot more work to deliver on that platform. We do hope, however, to provide an iOS version sometime in the future. Ideally that would be through Apple allowing us to reuse our code, but we aim to make it happen anyways.”