With loyal Apple fans lining up around the world Friday to get their hands on the new iPhone 6s models, Tencent updated its popular iOS messaging app WeChat with some 3D Touch goodness. (The update is live here.)

It also rolled out an update to its Windows app — I bet you didn’t even know WeChat was available on Windows! — to allow for free video calling on desktop between users. (You can download that here.)

The 3D Touch functionality allows iPhone 6s users to launch certain in-app features pre-selected by the developer right from the home screen by pressing down slightly more firmly on an app icon.

In the case of WeChat, a deeper press will now bring up options to mute notifications from the app for an hour, instantly display your personal QR code (this allows other WeChat users to add you as a contact by scanning it with the app’s built-in scanner), snap a picture with the app’s camera, or start a new chat. 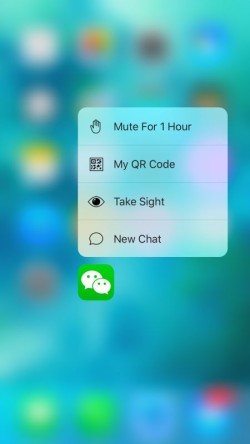 WeChat now claims about 600 million users, the bulk of whom are in mainland China and using a more powerful version of the app that is only available within the country.

We recently took a closer look at what WeChat is trying to do in terms of its online-to-offline (O2O) services integration, and got to the bottom of some new Evernote-style multimedia clip functionality that it introduced in an iOS update this month.

Unlike last year’s iPhone 6 launch, this year Apple decided to promote China into the first wave of launch markets for the new devices, alongside traditional first-wave markets like the U.S. and U.K.

Apple also showcased WeChat in the 3D Touch live demo at its iPhone 6s unveiling event in a clear nod to Chinese consumers — they represent a rising middle class that Apple increasingly relies on to satiate the demands of Wall Street.

But we’d already seen Apple acknowledge the growing pull of China when it included WeChat’s app for the Apple Watch in a pre-launch demo. The New York Times, meanwhile, tweeted an announcement of its new official international account on WeChat at the end of last week.

In general, the buzz around the new iPhone launch seems to be as big as ever. We took a look at the pros and cons of the devices, and also compiled pictures of the “Apple faithful” forming lines outside stores in the run up to the launch today.

Finally, we heard directly from Tencent over the weekend that WeChat had been hacked through a security flaw, but that no user data or money was stolen. That story seemed to be part of a wider hacking attempt of Chinese apps on the App Store, which garnered widespread media coverage.

The New York Times launched an official international account on WeChat. Scan the QR code to follow us. pic.twitter.com/m2wookykg6