WhoSampled isn’t always on the mainstream startup radar, but the London-based company has been building a solid product over the past eight years, one that unearths the veritable spider web of connections between your favorite songs. And with the company’s latest update, users will now be able to connect the dots between more than 30 million tracks on Spotify.

Available on Android, the Web, and iOS, WhoSampled scans the music on your device to tell you who has remixed, covered, or sampled each song. Alternatively, you can manually search for tracks and artists to see what songs have borrowed from each other and in what ways. The service is partly aimed at music geeks, but it’s also designed for anyone who ever experiences that annoying internal dialog: Where do I recognize that song from? 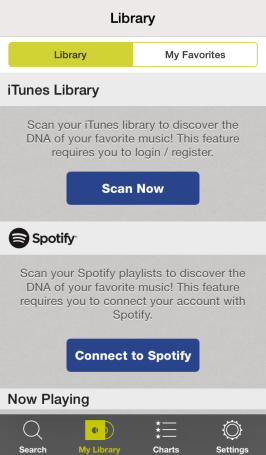 While many music fans no doubt still listen to music stored locally on their phones, the increasing shift to the cloud means that services such as Spotify are playing a more prominent role in how the world consumes music. And this is why music-centric companies such as WhoSampled, as well as fellow London-based startup Songkick, are turning to the cloud to ensure they’re not left behind.

Once you connect your Spotify account, WhoSampled will now be able access your private playlists and saved tracks and albums. You can also add songs you find within WhoSampled directly to your Spotify playlists. Additionally, Premium Spotify subscribers can stream songs from Spotify directly within the WhoSampled app.

For now, WhoSampled is limiting the scope of its Spotify integration to its iOS app, but the company tells us that Android will follow later this year.

Founded out of the U.K. capital in 2008, WhoSampled has amassed a decent-sized following and now claims 1.2 million monthly active users (MAUs). This figure is perhaps more impressive when you consider that the company has been 100 percent bootstrapped since its inception. And with no institutional funding to speak of, the company has been able to remain nimble and focus on its core offering.

With only five full-time employees, WhoSampled has indeed managed to remain streamlined. But that doesn’t mean that it hasn’t grown as a company — indeed, it has seen traction as the driving force behind other platforms and apps, with partnerships including Universal Music, Bluenote, and the Echo Nest (now owned by Spotify).

Data licensing is only one way WhoSampled makes money, however. The iOS apps costs $4 to download, for example, although the Android incarnation — which took two years to launch after the iPhone version first arrived back in 2012 — is ad-supported but free to download.

“We’d like the app to reach as many people as possible, but also need to be realistic about how we generate revenue,” explained Nadav Poraz, CEO and founder of WhoSampled, to VentureBeat. “Many Android users are asking us for an ad-free option and this is something we’re currently looking at.”

Other money-making streams, if you’ll pardon the pun, include affiliate commissions when WhoSampled refers users to buy music on iTunes or Amazon.

While WhoSampled has received some plaudits over the years, it doesn’t always garner the same attention as other music startups. But it is a very addictive app once you start using it, and it’s great to see the startup finally embracing the industry shift toward streaming.