The Wikimedia Foundation has rolled out a significant update to its iOS app today, one designed to make it easier to find random new things to read. 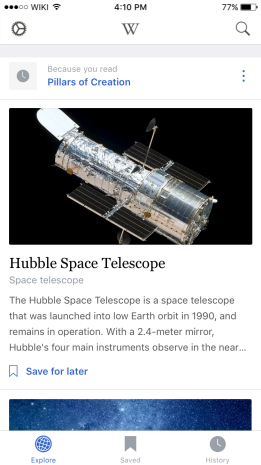 The refreshed app serves up a tailored feed based on a number of factors, some of which are personalized based on your location and on articles you’ve previously read. While Wikipedia has long offered ways to find new things to read, whether based on your location or via a “random” button, the dedicated Explore feed pulls together a number of different elements to make the app more of a destination you’d perhaps visit while waiting for your bus to arrive.

When you scroll through the Explore feed, you’ll see articles by “Featured article of the day,” “Top read articles,” “Picture of the day,” “Random articles,” “Nearby articles,” and “Because you read” articles that are related to previous articles you’ve accessed. While the Wikipedia app already let you save articles to access offline later, that feature is now more prominent and accessible within the new Explore feed.

With more than five million articles in English alone, Wikipedia has emerged as the de facto online encyclopedia over the past 15 years. But it’s not often perceived as a place you would visit on a whim to read about nothing in particular — sure, you’d visit it to read up on a specific topic that’s come to your attention, but it hasn’t traditionally been pitched as a destination. And this feels like what the Wikimedia Foundation is trying to change with this latest update.

Elsewhere, the refreshed iOS app now has enhanced navigation — including the addition of 3D touch, a feature that arrived with the latest iPhone and which allows you, instead of tapping or swiping on the screen, to simply press and hold. Alongside this, a neat new shortcut now lets you hold and ‘push’ the app icon on your home screen to access features such as saved articles — without opening the app.

Other updates include a new search feature that lets you find saved articles using Apple’s Spotlight function and offers more prominent high-resolution imagery within articles. Plus, Wikipedia for iOS now supports Apple’s Handoff feature, which makes it easy to transfer your browsing activities between devices.

The latest Wikipedia update for iOS brings in a slew of completely new features while “borrowing” a few that already exist on other Wikipedia platforms. The Explore feed is particularly notable, and it will be interesting to see whether this helps Wikipedia become a specific destination for general reading, rather than a source for settling pub arguments on when the Hubble Telescope first went into orbit.