Separating from Nokia appears to have been a great decision for health accessory maker Withings, as the company today announced three legitimately compelling new products ahead of CES: a customizable activity tracker called Move, an electrocardiogram-recording version of the tracker called Move ECG, and a next-generation heart monitoring device called BPM Core. Each improves significantly upon an earlier Withings release.

The simplest of the devices is the entry-level Move, a fitness and sleep tracker in the guise of an analog watch. As the latest follow-up to the company’s $450 2014-vintage Activité and $150 2015 sequel Activité Pop, the $70 Move is leaning on two key features to differentiate itself from innumerable rivals: an 18-month battery, and a wide variety of personalization options.

Battery life has been a major focus for Withings watches since early days, as the company has sought to contrast the longevity of its analog wearables with the day- or week-long lifespans of digital competitors. Paired via Bluetooth LE to Withings’ Health Mate app, the 38mm housing tracks steps, multiple types of workouts, and sleep patterns. One of its three dials is dedicated to a 0-100 activity progress meter tied into the app, while the other two dials tell the time.

Move will initially launch on February 5 with five different color schemes, including black, light blue, dark blue, green, and red wristbands. Each month and on “special occasions” throughout 2019, the company will introduce new color, case, glass type, and wristband options, with complete customization — including “down to the colors of the dials” — coming later in the year.

For $130, Move ECG takes one big step forward in functionality, enabling users to take electrocardiogram (ECG) readings to detect atrial fibrillation. Three total electrodes are included in the watch’s frame: two “discreetly” within the watch’s body, and the third within the bezel. To generate an ECG, users touch both sides of the bezel for 30 seconds, which the watch will signal with a vibration. Results can be viewed in the Health Mate app and shared with health care professionals.

The key to Move ECG’s appeal is that price tag. Apple’s Series 4 Apple Watch was the first consumer device to include a completely standalone ECG reader, but it starts at $399. Withings’ price is only $30 more than Kardia’s $100 ECG accessories, which depend upon other phones or watches to function. 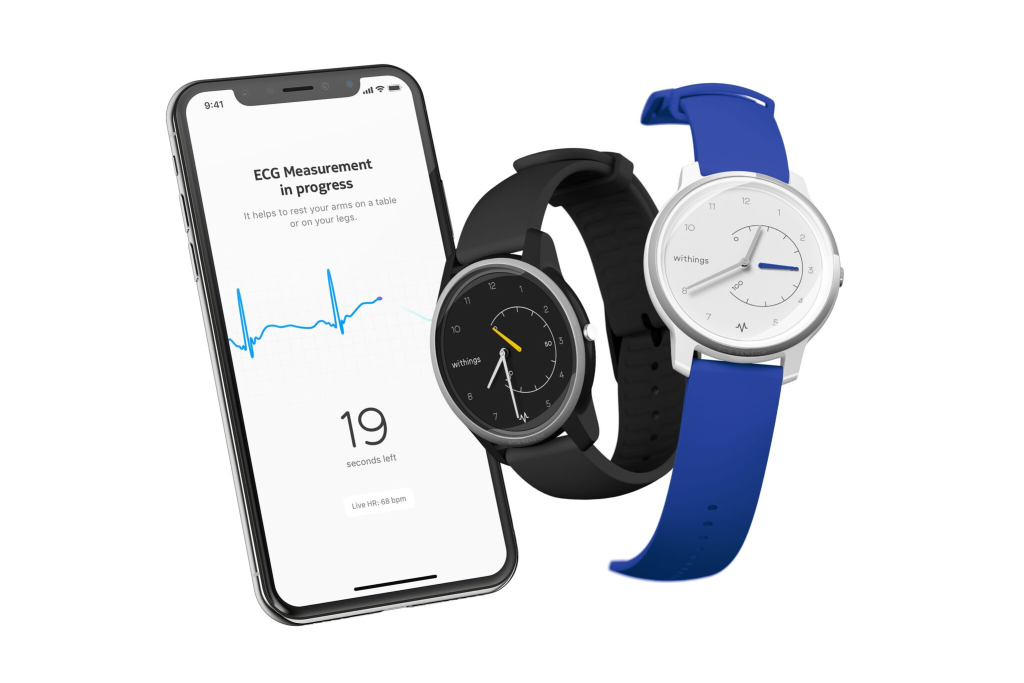 There are only a few compromises: Move ECG promises only one year of battery life versus Move’s 18 months, a small price to pay for the added feature. Withings will also offer it only in black or white faces, albeit with additional material and wristband color options, and it won’t ship until the second quarter of 2019.

Last but not least, Withings is introducing BPM Core, a direct follow-up to the blood pressure monitoring cuff BPM it introduced in 2011. Once again, the design features a gray fabric upper arm cuff with an attached plastic and metal tube, but it now incorporates three separate features: blood pressure monitoring, ECG reading, and a digital stethoscope with valvular health monitoring abilities. In addition to inflating for blood pressure readings, the cuff contains two electrodes and a microphone, with an additional electrode inside the metallic part of the aforementioned tube. 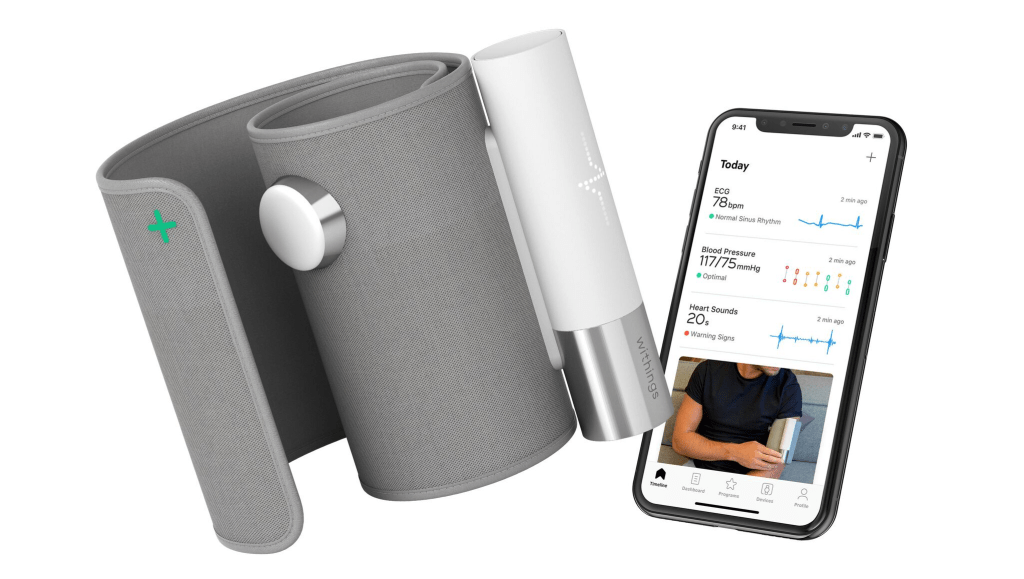 Even without a connected device, BPM Core can use its own LCD display to provide systolic pressure, diastolic pressure, and heart rate readings, alongside a green/yellow/red-coded high blood pressure indicator. ECG readings require users to wear the cuff, touch the tube’s electrode for 20 seconds, then check the results in the Health Mate app. The digital stethoscope promises to detect heart valve issues using an algorithm co-developed with Paris’ Georges Pompidou Hospital, listening and evaluating heart flows to determine whether the valves are too narrow to fully open or unable to fully close.

All of the advanced functionality means that BPM Core will carry a steep price tag of $250, up from the original model’s $130. That’s many times the price of a basic blood pressure cuff, even one with Bluetooth, but between the ECG and stethoscope features, some users may find this all-in-one solution to be appealing. Like Move ECG, it’s still under review for FDA clearance as a medical-grade device, and expected to ship in the second quarter of 2019.