Dropbox has launched a new feature that allows you to share photos, videos, and other files directly with people you’re chatting with on Facebook Messenger. The feature is available within Messenger’s iOS and Android apps, and you can either share directly through the messaging app or right from Dropbox.

Facebook confirmed with VentureBeat that this is the first time that Messenger has partnered with a cloud-based file sharing service.

“We want people to communicate just the way they want to on Messenger, with everyone they care about,” said Stan Chudnovsky, Facebook’s head of product for Messenger. “Giving our users the ability to share their Dropbox videos and images in Messenger threads with just a few taps will help them bring more style and personality to those conversations.” 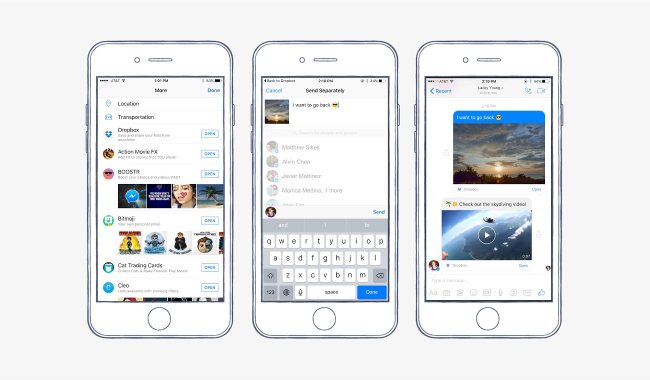 When you’re in a conversation, tap the “more” button (the one with the ellipses) and choose Dropbox as the source. You’ll have to authenticate with the cloud storage service first, but after that, you can share any file on Dropbox without having to leave Facebook Messenger.

Videos and images will be viewable directly in the chat, allowing for easy playback and interactions. If you have a non-visual file being shared, you’ll have to open it within the Dropbox mobile app. The company says that it’s “a quick, simple way to share vacation snapshots, home movies, and laugh-worthy memes” with Facebook Messenger’s 900 million users.

Dropbox becomes the latest service to tap into Facebook’s Messaging Platform, which debuted last year at the social network company’s F8 developer conference. It also comes just hours before Facebook is believed to announce the platform’s next phase, specifically around support for bots.

The Dropbox integration feature is rolling out today. Facebook said that it will be available more broadly “soon.”

Updated on 2:59 p.m. Pacific on Monday: This post has been updated to include confirmation from Facebook that this is the first time the messaging app has integrated with a file sharing service.