If you want to get a sense of the extent of Apple’s cultural might, glance about 6,200 miles east of the company’s Cupertino headquarters to the capital city of Ukraine. Sometime in 2018, the Eastern European city of Kyiv will somewhat improbably become home to a new museum devoted to Apple products.

While the city that Americans refer to as “Kiev” is hardly a backwater — either culturally or economically — its connection to the world’s most valuable company isn’t so obvious. There is no previously unknown connection to Steve Jobs, no massive Apple facility in the country, no hidden backstory that reveals an unlikely chapter between Ukraine and Apple.

Instead, the answer to the question “Why Ukraine?” is simple: Oleksandr Kosovan.

One of Ukraine’s best-known entrepreneurs, Kosovan is founder and CEO of MacPaw, the company that makes CleanMyMac software and Setapp, a Mac application subscription service. Founded in 2008, the company now has about 100 employees and is one of Eastern Europe’s most successful startups.

The company’s roots lie in Kosovan’s Apple obsession, explained Julia Petryk, MacPaw’s head of public relations. While attending Kyiv Polytechnic Institute, Kosovan spotted Apple’s newly released transparent keyboard for the Mac in 2003 and fell head over heels. Though he didn’t own a Mac, he had to have that keyboard.

“That was the only piece he could afford back then,” Petryk said. “He saved a month of salary to buy it.” 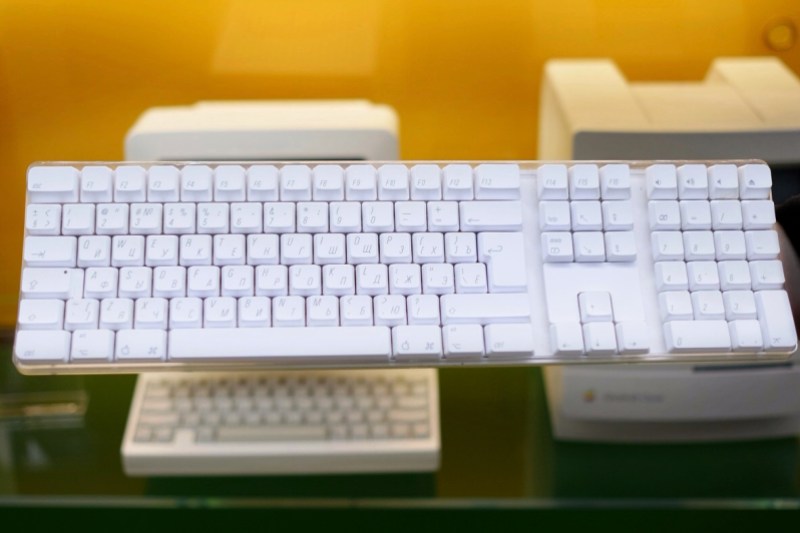 Above: The transparent Mac keyboard Kosovan bought in 2003.

Eventually, of course, he did buy his own Mac. Later, he started a company devoted to making Macs run better.

As MacPaw grew, the company reserved a space in the corner of its offices for displays of older Apple products. But early in the summer of 2016, Kosovan heard that the legendary Mac repair store Tekserve in New York was closing. Tekserve was an Apple store before there were Apple stores, but the owners said they simply couldn’t compete anymore.

But in the shutting down, the owners also said they needed to find a new home for 40 Macs that spanned nearly the entire history of Apple: A 128K Macintosh signed by Steve Wozniak; an Apple Lisa; even a NeXTcube from Steve Jobs’ second act. A decision was made to auction them off, but Kosovan put in a bid of $47,000 for the whole collection and won.

Winning presented its own issues, however. Shipping that much computer hardware between the U.S. and Ukraine was going to pose a customs nightmare. So the company enlisted friends and friends of friends to bring the collection over one Mac at a time as they happened to be traveling back and forth.

Eventually, they all landed in MacPaw’s HQ, where a more proper display was constructed for them. The company’s employees were excited, but so were several other local Mac fans who volunteered to come in and get all the Macs back in working in order, Petryk said. The company allows the general public to visit, as well as conducting tours for students. 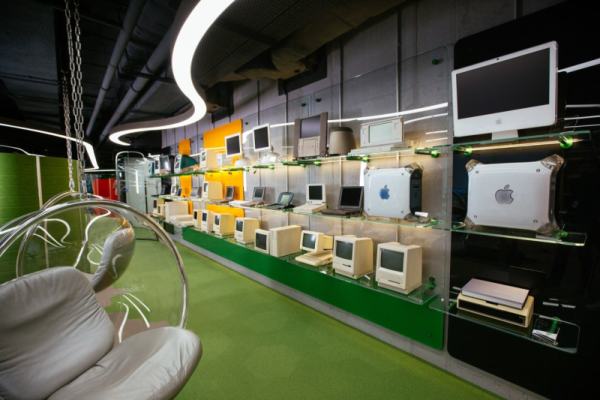 Above: MacPaw’s current Mac museum in its HQ.

As final touches were being put on the new display last spring, MacPaw got wind of another collection being sold by someone in Poland:

Kosovan acquired that collection too. In addition to even more Macs, this haul included iPads, iPhones, iPods, product posters, and advertising materials — a bounty that was going to be too big to cram into the display space in MacPaw’s office.

So MacPaw recently announced that it has begun looking for a space in Kyiv to create a separate museum for all of these Apple products. The company will celebrate its 10th birthday in July 2018, and the new museum will be among 10 charity projects it plans to focus on this coming year, Petryk said.

The idea is to create a richer experience, with interactive exhibits that tell the story of Apple, in addition to displays of the Apple products. There’s no firm price tag on the project. But for Kosovan, the museum is a way to pay homage to a company that changed his life, as well as to hopefully inspire a new generation.

“He was always grateful for the inspiration that Apple gave him,” Petryk said. “We hope it will be interesting not only for geeks, but for anyone who is looking for inspiration in creative work.”