But according to former KGB Major General Oleg Kalugin, he is now, albeit as a consultant or technical advisor.

“These days, the Russians are very pleased with the gifts Edward Snowden has given them. He’s busy doing something. He is not just idling his way through life.”

“The FSB are now his hosts, and they are taking care of him,” Kalugin boldly claimed in an interview with VentureBeat.

The 80 year-old retired Soviet intelligence officer is Russian spy royalty personified. At 34, he became the youngest KGB general in history, and Kalugin famously helped run Soviet spy operations in America during a career that spanned over three decades.

READ MORE: Former NSA director: ‘I would lose all respect for Russia

if they haven’t fully exploited Snowden’

Kalugin and his wife relocated to Maryland after falling out of favor with the Russian regime in the 1990s. After becoming a vocal critic of Russian president Vladimir Putin (Kalugin called Putin a war criminal for his second invasion of Chechnya), a warrant was issued for his arrest. He’s been in the U.S. ever since.

Kalugin still has juice within Russian intelligence circles and maintains contacts with friends in Russia from his days as a Soviet spy. Kalugin teaches at the Centre for Counterintelligence and Security Studies and also sits on the advisory board for the International Spy Museum in Washington, D.C. 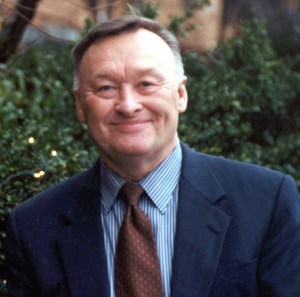 Back in Russia, according to Kalugin, Snowden is being handled by the FSB, the KGB’s successor. Kalugin claims that Snowden has shared much of his vast trove of secrets about the NSA with his Russian hosts, and in the process, has allegedly handed the FSB one of their biggest intelligence hauls and propaganda coups since the end of the Cold War.

This claim echoes early warnings from congressman Michael McCaul, senator Dianne Feinstein, lieutenant general Michael Flynn, and congressman Mike Rogers, yet no concrete evidence proves that such an exchange took place. Snowden has consistently denied claims that he took security documents with him to Russia.

“Whatever he had access to in his former days at NSA, I believe he shared all of it with the Russians, and they are very grateful,” Kalugin claims.

It has been over a year since Snowden downloaded thousands of top secret NSA documents from his stint as a NSA contractor and traveled first to Hong Kong from his home in Hawaii. He arrived in Moscow August 1 after he failed to gain asylum in 30 other countries.

Snowden’s leaks revealed the NSA’s efforts to turn Facebook into a surveillance machine, the agency’s close ties with Google, and the theft of private user data from firms like Yahoo and Apple. In the wake of these revelations, many of the tech industry’s most powerful firms have frantically adopted new security protocols at unprecedented speeds.

Snowden shared his haul with security journalist Glenn Greenwald and other media outlets, like the Washington Post and Germany’s Der Spiegel, shedding unprecedented light on the prodigious intelligence gathering programs of his former employer and sending shockwaves around the world.

Greenwald, who lives in Brazil but is currently traveling in the U.S., did not return emails for comment.

The Snowden debacle happened on the watch of Army general and former NSA Director Keith Alexander, who retired from the agency last year after running it for eight years. Alexander declined comment for this article.

A spokesman for Alexander explained in a polite email to VentureBeat:

We appreciate that you have reached out to us. General Alexander is focused now on building a new business and not doing any interviews on Snowden or other subjects. So for now we are going to pass.

These days, exile in Russia means Snowden, 30, has lots of time on his hands. A source in Moscow with connections to Russian intelligence said the American is believed to be living, at least part time, in a dacha 70 miles south of Moscow in an FSB retirement community reserved for favored cadres.

“He has lots of free time. He doesn’t need to go into the office anymore,” Kalugin said.

Snowden’s location could not be independently confirmed.

While free to leave Russia, Kalugin claims Snowden’s whereabouts are monitored by his FSB handlers, who allegedly control his spending budget and watch over whom he talks with.

In Kalugin’s view, Snowden is guilty of treason.

“Of course he is, by American standards. Snowden is a traitor,” Kalugin said. “When someone changes sides and goes over to the other side, it’s a victory,” he said.

While Snowden is a traitor to some — like Bill Gates — and a hero to others — like Apple cofounder Steve Wozniak and Pentagon Papers leaker Daniel Ellsberg, former NSA spook Adam Fuchs was more circumspect when it came to calling him a Benedict Arnold.

Snowden’s value to his Russian handlers has not totally run its course, claims Kalugin, and the FSB will allegedly use him as a technical consultant and advisor on topics that interest them. His travel in the country also may be coordinated by the FSB, Kalugin said.

But the former KGB general believes that if he wants to, Snowden will have little trouble integrating himself into Russian culture and digging in for the long haul.

“He is not being left alone obviously. The Russians are trying their best to be hospitable,” Kalugin said.

“At this point,” said Kalugin, who has written three books on his 34 years in Soviet intelligence, “the reception in Russia for him has been exceptionally friendly.”

“And I’m sure that Snowden is enjoying it.”