Mozilla is resurrecting its recently expunged Test Pilot program with a renewed focus on privacy-focused tools and products.

The Firefox developer today lifted the lid on the first product to emerge from the new Test Pilot, and it appears to be something akin to a virtual private network (VPN) in all but name. Firefox Private Network, as the new tool is called, is available in beta today for logged-in Firefox desktop users in the U.S. only, and is accessible through a browser extension.

By way of a quick recap, Mozilla debuted Firefox Test Pilot a decade ago but then relaunched it back in 2016. Test Pilot went on to attain an average of 100,000 daily users, each looking to test Mozilla’s latest developments — including a price-tracking feature for online shoppers, content recommendations based on browsing activity, and more. Some of these became full-fledged features within Firefox and others did not, but back in January Mozilla announced it was killing its Test Pilot program altogether. This came as something of a surprise given Mozilla’s own statements about the success of the program. At the time, Mozilla said it was “evolving” its approach to experimentation and suggested it was looking to ideate more widely across the company.

Fast-forward nine months, and Firefox Test Pilot is back for a third time.

Despite the pilot’s name, Mozilla said privacy products emerging from the program may not be focused squarely on the Firefox browser, though, of course, the first offering is all about Firefox. Moreover, rather than being early-stage “suck-it-and-see” tools, they will be nearly finished products — “just one step shy of general public release,” Mozilla product VP Marissa Wood wrote in a blog post. 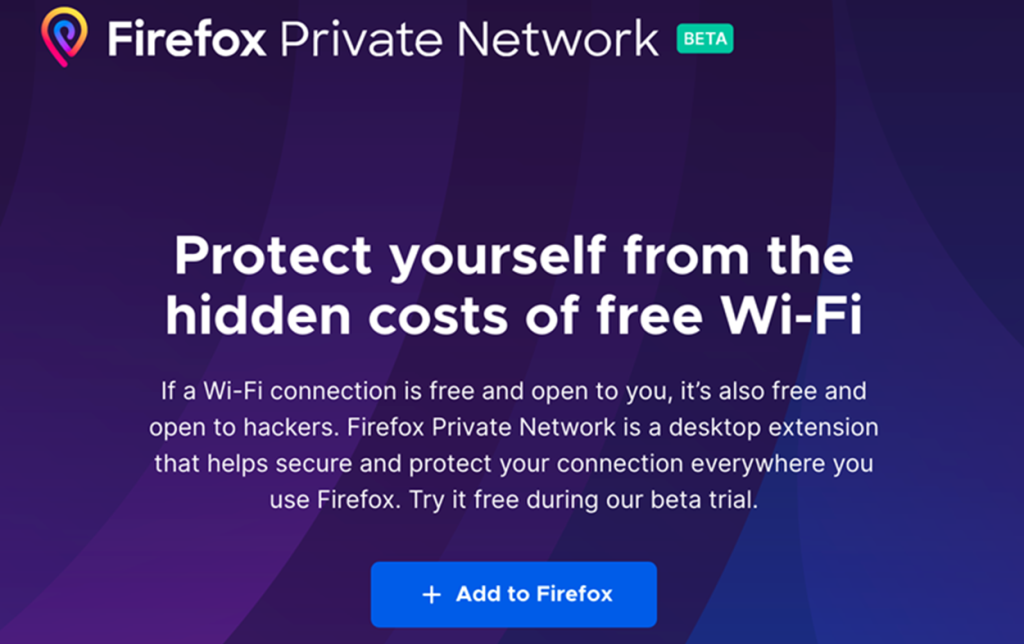 In a nutshell, the Firefox Private Network extension will provide a “secure, encrypted path to the web” to protect the user’s Wi-Fi connection and data contained within the Firefox browser. One of the scenarios Mozilla thinks Firefox Private Network will be useful for is when connecting to the internet through public Wi-Fi hotspots, as it will shield personal information and conceal what websites a user is visiting.

The Firefox Private Network also has a toggle button that makes it easy to activate for a specific browsing session. 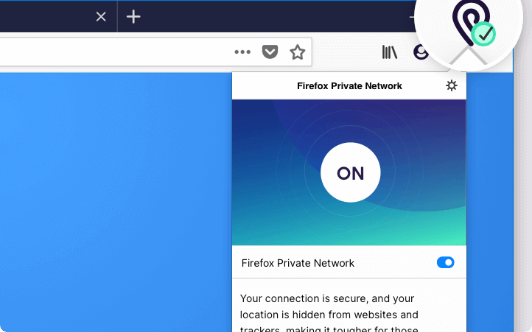 Above: Mozilla’s Firefox Private Network can be toggled on and off

It has been clear for some time that Mozilla is striving to play up its privacy credentials amidst all the scandals and abuses that have permeated the web. In the wake of the Facebook and Cambridge analytical data debacle, last year Mozilla launched the Facebook Container add-on for Firefox, which isolates web browsing activity from Facebook. And last week Firefox 69 arrived on the scene with third-party tracking cookies and cryptomining blocked by default.

“One of the key learnings from recent events is that there is growing demand for privacy features,” Wood said. “The Firefox Private Network is an extension [that] provides a secure, encrypted path to the web to protect your connection and your personal information anywhere and everywhere you use your Firefox browser.”

Like a VPN, the new Firefox Private Network extension conceals a user’s internet protocol (IP) address, which makes it harder for online advertisers to track browsing history. But unlike most of the popular VPN services out there, Firefox Private Network doesn’t seem to tap regional servers, meaning it can’t be used to access geo-restricted content in other markets. It’s therefore not entirely clear what benefits it will bring compared to more established VPNs. In fact, Mozilla has been very careful not to call this new product a VPN — likely for that very reason.

Although the extension will be free for the duration of its beta phase, Mozilla has hinted that it may charge for the service in the future, depending on the feedback it garners.

News that Mozilla was working on a VPN-type service actually emerged a couple of months back, after the company posted an online survey here. Before that, it briefly experimented with selling VPN access via a partnership with ProtonMail’s ProtonVPN. More recently, Mozilla has confirmed that it’s working on a paid-for version of Firefox that ships with premium features such as a VPN or cloud storage. Indeed, that seems the route Mozilla will most likely take with Firefox Private Network — it would make sense to bundle a bunch of features and sell them to power users as a monthly package.