Notion has added Google Nest integration to its internet of things (IoT) smart home sensors. The integration comes with version two of the company’s home-monitoring sensors, which can detect everything from motion to temperature changes and water leaks.

The Denver-based company wants to accelerate adoption of the internet of things, or making everyday objects smart and connected. The hope is that you’ll be able to spot problems more quickly, like detecting a water leak before it does a lot of damage.

“We’re on a mission to help people protect the things that they love most,” said Notion CEO Brett Jurgens, in a presentation last week at the Translink Capital conference. “Every space is very different. You may have a rental property. You may have elderly parents you want to monitor. How can we come up with something easy to use and powerful enough for all of us to be empowered to protect us.”

Stats show that only a quarter of Americans have a home security device, and only 28 percent have IoT devices. Those stats are certainly one of the reasons Notion raised $3.2 million in June 2016 and raised another $10 million in June 2017.

Notion’s low-cost and easy-to-install home monitoring kit packs multiple capabilities into a single device. Each sensor is identical yet multi-purpose, offering homeowners the flexibility to monitor and receive instant alerts on things happening across their entire home. 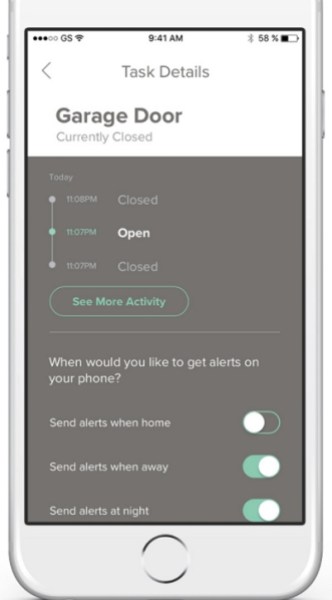 Above: You can assign alerts for various sensors using Notion’s app.

By working with Nest, Notion users will have access to a more holistic view of their home’s health and have the ability to take action on temperature-related alerts. The integration will allow homeowners to control their Nest thermostat settings and view Nest’s humidity readings. It can also save energy through Notion’s energy waste detection, such as sensing windows that are open while the air conditioner is on.

Jurgens said that insurance companies like the use of Notion, as it helps reduce risks that result in insurance payouts. Notion can detect the sound of a smoke alarm, for example, and it can send you an alert.

Notion’s connections to Nest will initially launch on iOS, while its second-generation hardware is now available for purchase on Notion’s website. You can get three sensors and a bridge unit for $220.

Founders Jurgens and Ryan Margoles grew up together and had been thinking about startup ideas for a while. One day, Margoles had a smoke alarm go off because the battery was low. His new golden retriever puppy was frazzled by the time Margoles got home from work. He thought it would be a good idea to build a smart smoke alarm that could alert you when you weren’t home. He and Jurgens say they had this idea before Nest came out. Notion has 25 employees.