Steve Jobs is Big Brother, and all the iPhone-buying public are just zombies, according to internal NSA documents detailing what the agency has been working on in terms of cracking smartphones and extracting personal information, social connections, location information, and more.

Don’t worry, Android fans, you’re on the target list too.

According to fresh documents from super-leaker Edward Snowden, the NSA targeted smartphones as a massive windfall of sensitive data that new device users were creating, storing, and ultimately unwittingly sharing with the U.S. spy agency that has been embroiled in controversy ever since Snowden first started leaking details about Prism and XKeyScore and other secretive government agency spy technologies.

Here’s “big brother,” according to one leaked NSA presentation: 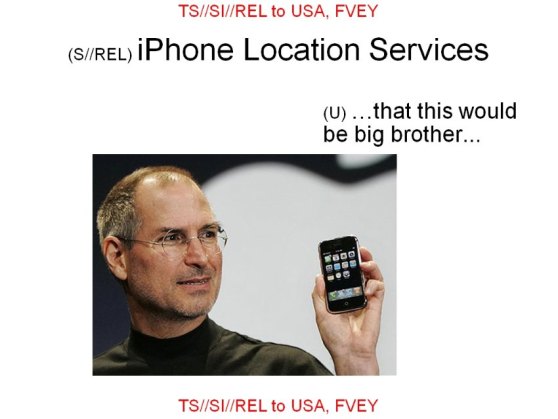 Above: Steven Jobs as Big Brother, according to the NSA

And, Apple’s paying customers were seen in the eyes of the NSA as idiotic willing participants in their own downfall. One slide in the NSA presentation identifies them derogatorily as “zombies:” 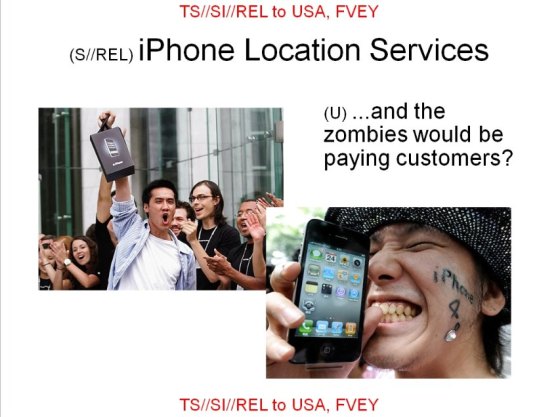 According to the leaked documents, the NSA started working on ways to crack smartphones — including the supposedly secure BlackBerry and Android — basically as soon as the smartphone revolution kicked into high gear five years ago. By cracking mobile operating systems and eavesdropping on mobile communications, the NSA has acquired private and sensitive images and data, such as a iPhone picture of a foreign government official who took selfies while watching TV, and a picture of an unknown man, apparently an Afghani fighter, in the mountains of Afghanistan.

And remember iPhone’s location bug? That enabled tracking of people over extended periods of time before being fixed by Apple in mid 2011.

If BlackBerry and iOS have had the NSA’s full attention, global leader Android, which is particularly strong in Asia, Africa, Eastern Europe, and South America, is not far behind. Special teams of NSA agents began intensively examining Google’s mobile operating system in 2010, according to the documents. Perhaps the NSA will label those users droids.

Land of the free and the home of the brave? Our tax dollars at work.

One the one hand I’m almost glad that Steve Jobs is not alive to see how he’s been portrayed, and to see how the company he founded and the tools he created to build and extend human capability are being used to control and spy and invade privacy. On the other hand I wish Jobs was alive, because he would certainly do something at Apple to at least make it harder for the NSA to treat Apple’s customers as their own private data cash cows.