Vivaldi, the desktop browser app that was launched in 2016 by Opera cofounder Jon von Tetzchner, has introduced a small but interesting new feature today.

As most other browsers do, Vivaldi offers a private browsing mode that offers a degree of privacy insofar as it doesn’t record the sites you visit or store cookies and temporary files. However, moving forward, Vivaldi will also make privacy-focused DuckDuckGo the default search engine within private browsing windows, irrespective of what your default search engine is in the normal browsing mode.

Founded in 2008, DuckDuckGo is pitched as the antithesis of Google, insofar as it doesn’t profile or track its users around the web. It also promises to serve the same results to all users.

Apple has offered DuckDuckGo as a search option in Safari since 2014, while Tor has used it by default since 2016.

With most of the major browsers, such as Firefox and Chrome, the default search engine within incognito mode is the same as the standard browsing window. You can manually configure your search engine when you switch to a private window, but for many that could prove just a little bit too much friction. More importantly, many people may not be aware that using Google, for example, within a private window may still leave their browsing activity visible to others, including their school, employer, or internet service provider (ISP).

“We believe privacy is a fundamental right and that users should not be tracked online or offline,” noted von Tetzchner, who serves as Vivaldi CEO. 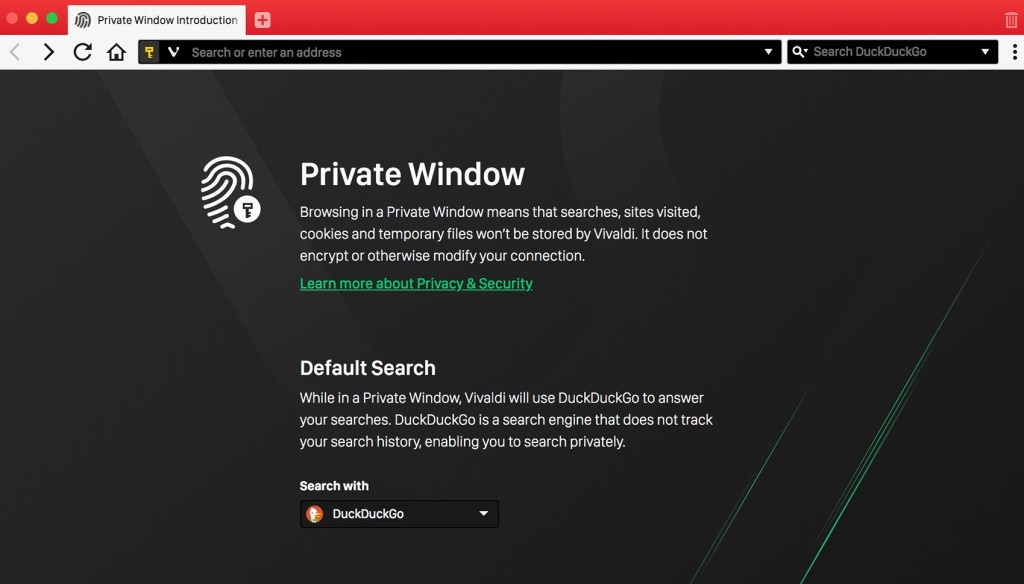 Above: Vivaldi with DuckDuckGo as default search engine

This launch is notable for another reason. To the best of our knowledge, no other browser allows users to set different default search engines for standard and private browsing windows. With Vivaldi, you will now be able to choose a different one for each — so if you don’t want DuckDuckGo in private mode, you can switch back to Vivaldi’s normal default, which is Bing. Or you can choose another one yourself, such as Google; however, that kind of defeats the purpose of going into private browsing mode.

So far in its short existence, Vivaldi has pretty much been losing money — von Tetzchner’s money — though it does make some revenue through tie-ups with affiliates. Back in 2016, the company said that it needed 5 million users before it could turn a profit, but when asked by VentureBeat this week, Vivaldi said it has less than 1 million active users. It is currently working on mobile versions of its browser, though, something that should go some way toward boosting its numbers.

Growing privacy concerns and seismic shifts in the political sphere have led a number of VPN and encrypted messaging services to report a surge in downloads. And with Facebook’s current controversy over how millions of its users’ information landed in the hands of data mining company Cambridge Analytics, online privacy is the hot topic of the moment.

“The current climate demands a thriving internet — not an internet with increased surveillance and security breaches,” von Tetzchner continued. “There has been a widespread concern amongst users about their data being shared. More than ever, there is an immediate need to protect our privacy.”

While this tie-up was in the works already, Vivaldi is striking while the iron is hot by positioning itself as a company that values privacy. This will benefit DuckDuckGo too, which should experience a small jump in traffic as a result of this.

“A lot of people think their searches aren’t tracked in private browsing modes — unfortunately, that’s not true,” added DuckDuckGo CEO and founder Gabriel Weinberg. “This new integration with Vivaldi enables people to get the privacy they expect and deserve in that mode.”