Airbnb has revealed what it believes to be the next stage in its evolution to make it easier for hosts and guests to build a better community, designed to facilitate “meaningful and magical moments.” The company has released trips, experiences, and new features for hosts to manage their listings.

“For many people, traveling is easy, but it’s not magical,” proclaimed company chief executive Brian Chesky. “We don’t think there should be a tradeoff. But the question is how do you create magic?” He recounted the notion of a hero’s journey, which was coined by American scholar Joseph Campbell. This resulted in an epiphany that the home was just a small part of the great journey, and that Airbnb had a bigger mission to pursue: “It’s about immersing in local communities.” 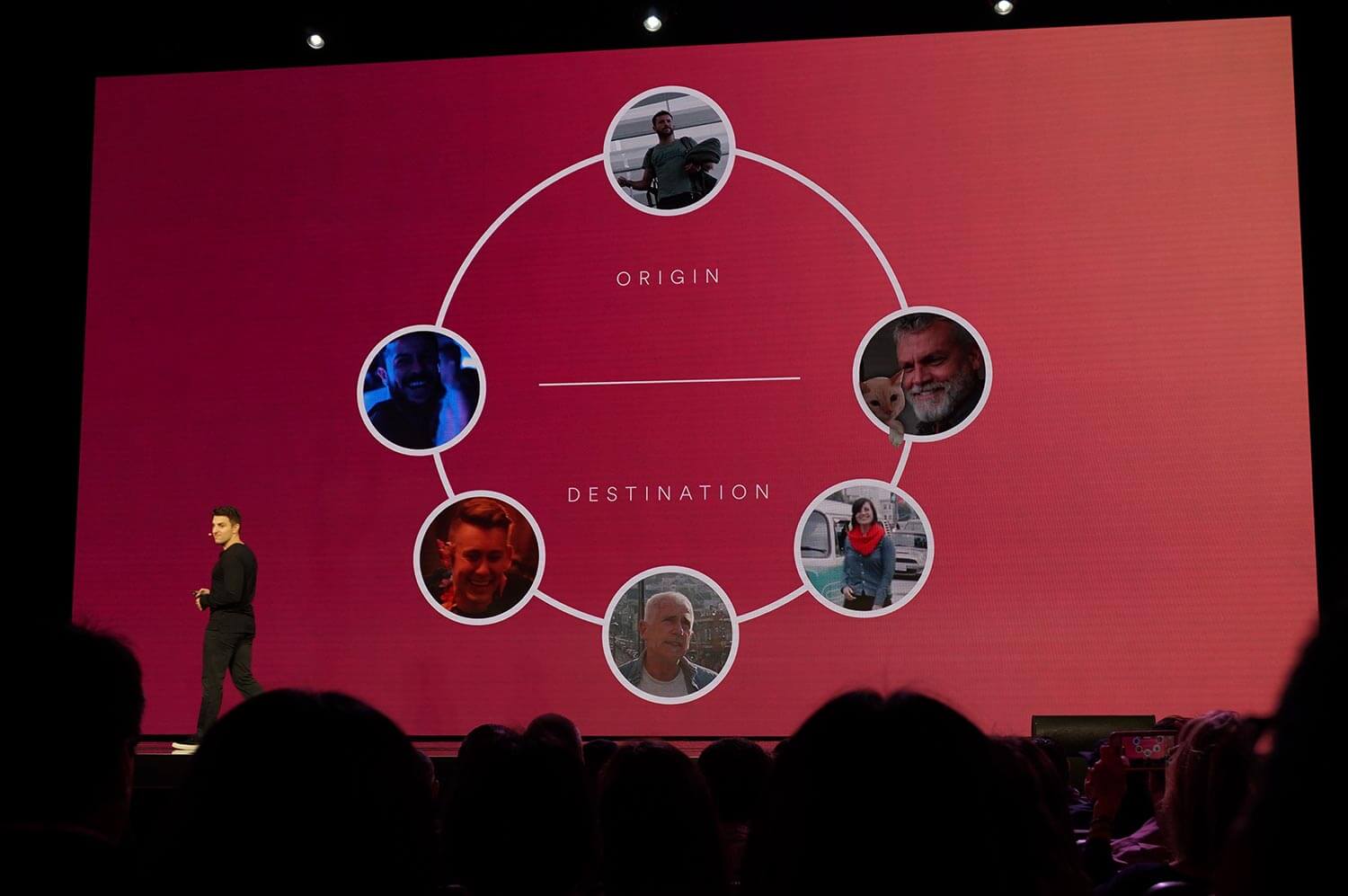 Part of that vision includes an updated app centered around trips and experiences. Initially termed as “magical trips,” as reported by Skift on Wednesday, this new program facilitates peer-to-peer-like tours and activities. When you travel, the problem is that it’s hard to meet people that live in a local community. Experiences are hand-crafted happenings offered by local hosts. There are immersions and also single experiences which last a few hours. They’re organized by passion and passion. You can scour through things such as neighborhoods, food and dining, and more — think of them as travelogues, or perhaps Twitter Moments, but more in-depth and based on maximizing the experience you’re hoping to have.

Half of the experiences you’ll find are below $200, according to Chesky, and you can instant-book one from within the Airbnb app. It’s been in private beta for a few months, but is now going to be more widely available. Trips launches 500 experience in cities worldwide including Detroit, Paris, Nairobi, Havana, San Francisco, Cape Town, Florence, Miami, Seoul, Tokyo, and Los Angeles.

But what if you want to check out local spots? Airbnb has added places, which replaces guidebooks to help you really find what people in the community go to eat, do on the weekend, and more. Insider guidebooks are local insiders that recommend things for people. Instead of providing just a list of places with no sense or direction, Airbnb has opted to start from the perspective of the person. More than 1 million individual recommendations worldwide are included in Airbnb places, and the Insider guidebook will be initially available in six cities: San Francisco, Los Angeles, Havana, Nairobi, Detroit, and Seoul. 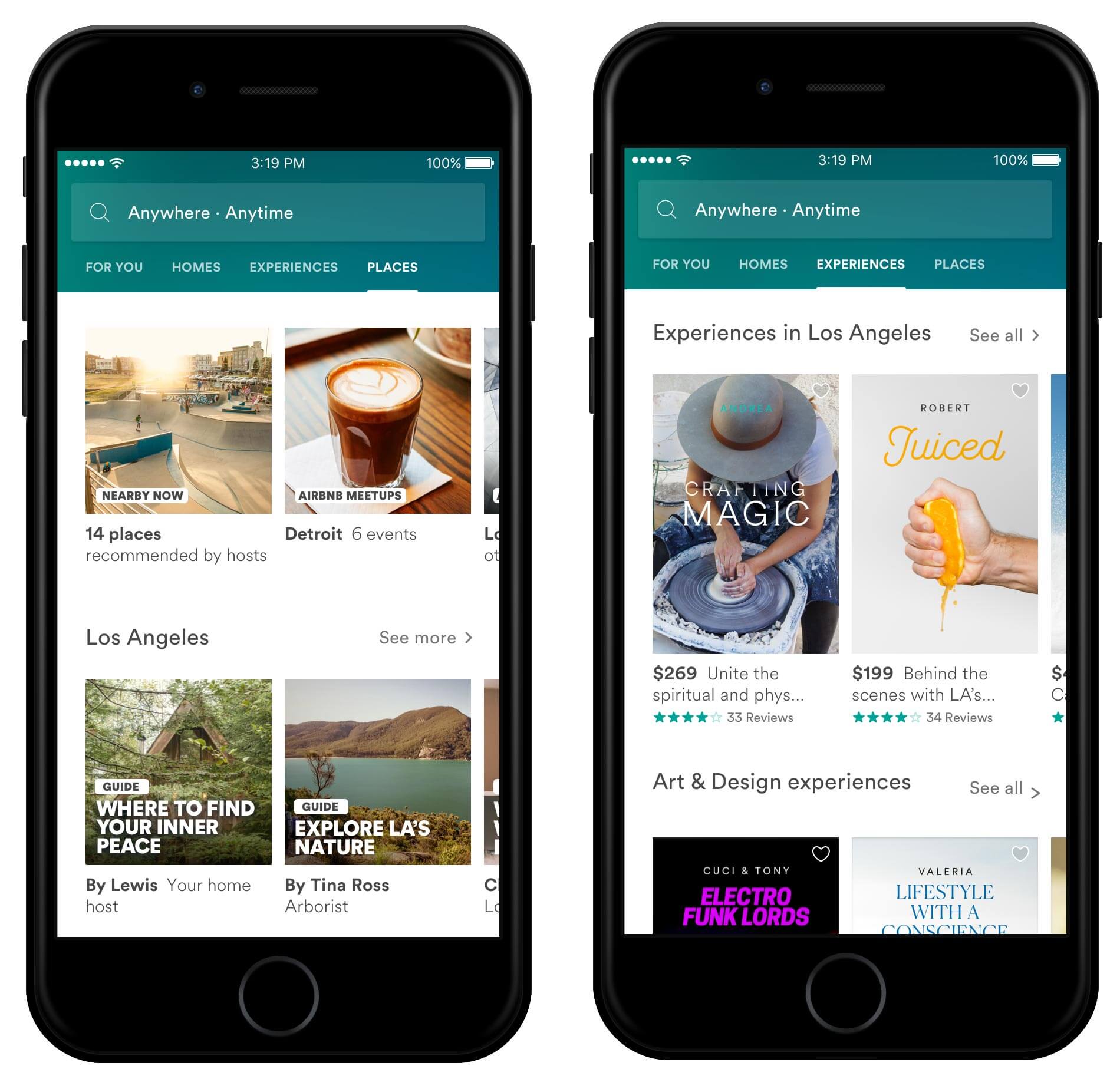 Not only do you get written guides, but also audio walks you can use to navigate. Airbnb has partnered with Detour to provide these services, with the first such guides available in Los Angeles now, with San Francisco, Seoul, Paris, London, and Tokyo to follow in spring.

The app includes options to meet up with others in the city, also highlighting things that are near you right now.

The unveiling of these features took place at the company’s annual Airbnb Open conference. It’s here where company executives keep hosts engaged in the progress of the platform, because they’re the company’s main lifeline. To emphasize this point, Airbnb brought on board Donna Boyer as its first head of product focused exclusively on hosts. This year’s event happens to be the first one she’s attending, and her presence and what she says could have an impact on hosts’ expectations.

Airbnb is the trip platform

Chesky envisions Airbnb being the trip platform, teasing that with “people power,” the company will soon encompass the entire travel experience, including not only home, experiences, and places, but also flights and services. He declined to cite more specifics, but there’s likely going to be other integrated offerings so that the Airbnb app becomes the default app for travelers, simplifying their trip so they focus on what’s in front of them instead of having to plan their entire day.

“If you have a passion, if you have an interest, or if you have a hobby, you can share your community with others in the world, because you see, travel has never been about where you go, but about who you could become,” the company’s CEO said. “And this is something that we would love to be able to build together. We invite you to join us in this adventure together.” 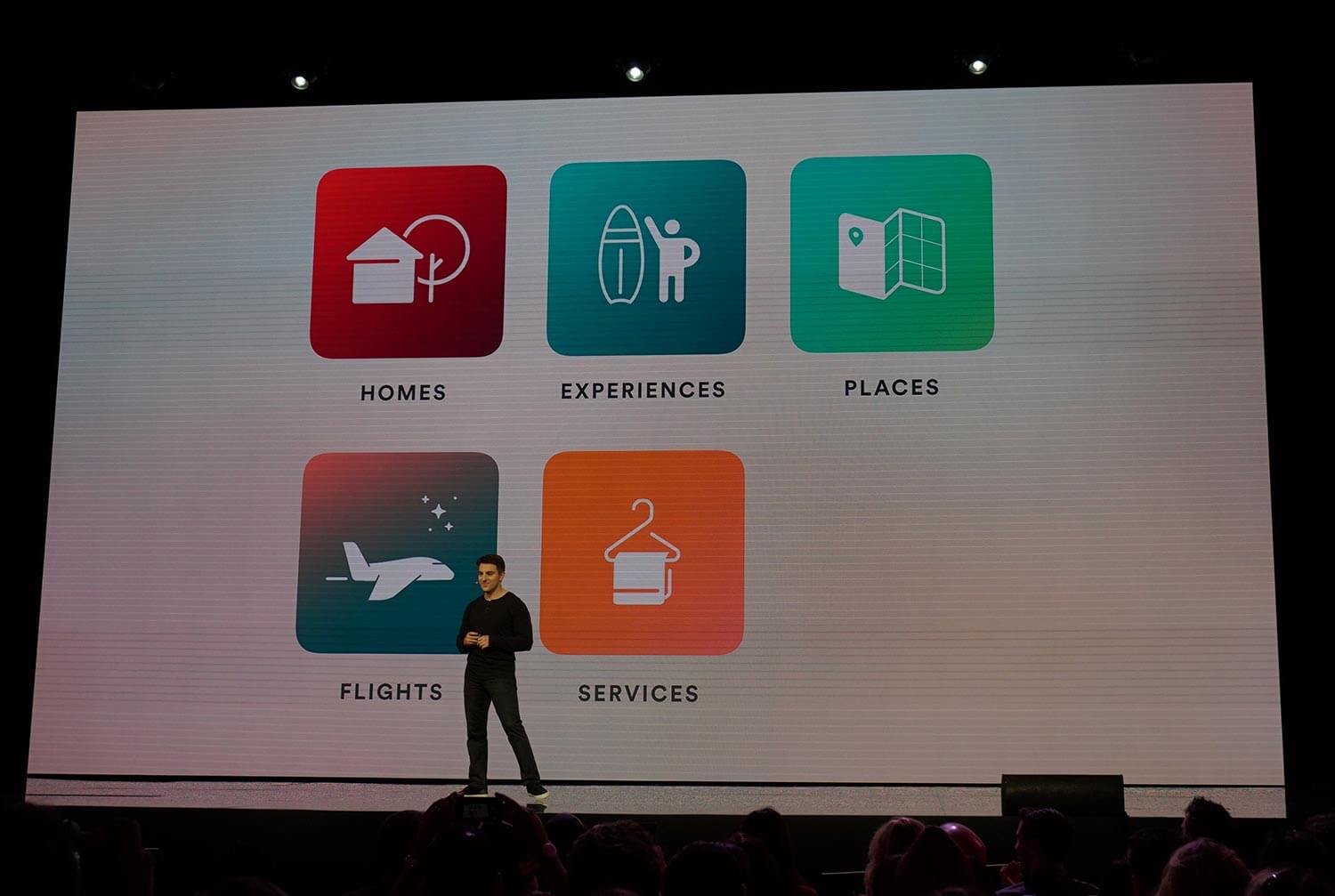 Above: Airbnb chief executive Brian Chesky highlights that the company will soon expand into other trip-related areas, including flights and services.

Additional services are great, but how will the company ensure people’s safety? Airbnb has rolled out an updated identity authentication process that asks both hosts and guests to scan their official government ID and upload a selfie. “Having a more robust standard of authenticating identity will make the Airbnb community stronger and reaffirms Airbnb’s ongoing commitment to authenticity, reliability, and security,” the company said in a statement. New experiences users will be required to follow this protocol.

Push beyond the home

Today’s announcements about expansion beyond the home isn’t really that surprising, as the company teased it during a press event in April. At that time, Airbnb unveiled a new campaign engineered to change how we view traveling, morphing it from being a tourist to living like a local.

The company has spent quite a bit of effort on empowering the home, such as providing “smart” tools to improve host performance and maximize bookings; adding integrations with connected devices such as August smart locks, Kevo, Lockstate, Nest, Yale Locks, Unikey, and Danalock; and supporting business travel certifications. But over the past few years, Airbnb has been expanding its sphere of influence to focus more on things that create a more holistic experience, namely the community. 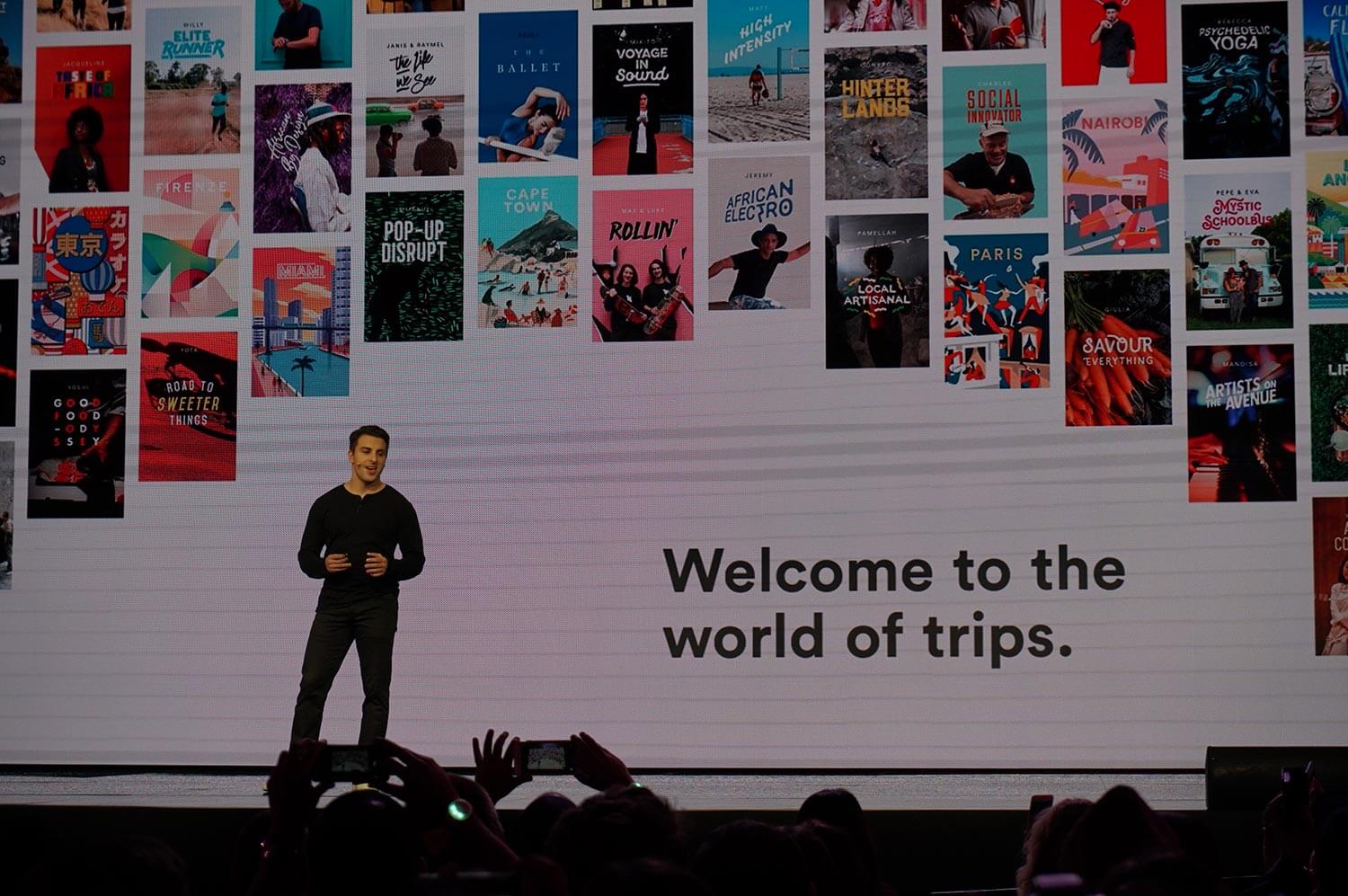 Above: Airbnb chief executive Brian Chesky speaks about the company’s expansion into being your trip concierge.

Four years ago, Airbnb launched its Neighborhood program, which essentially is a tour guide curated by locals. It’s now integrated into the company’s main app, and it helps guests feel more like they belong where they are, even though they’re only temporarily staying there. And then there’s also guidebooks, a la TripAdvisor and Yelp, that are category-focused, such as drinks and nightlife, sightseeing and attractions, parks and nature, arts and culture, and shopping.

Its evolution towards the bigger picture, while likely beneficial to its users, could also be an effort to instill a belief in investors that Airbnb has what it takes to be a public company, should it pursue that route. Airbnb not only has unsettled traditional lodging and accommodation companies, but has become more valuable than the most popular chains — in fact, a Morgan Stanley analyst estimates that Airbnb’s threat to hoteliers is increasing. But it can’t keep up its growth by simply focusing on homes, which are finite in number. So now the company is extending its reach to adjacent touchpoints and services to provide an experience it believes it’s uniquely qualified to create.

Resistance from the community 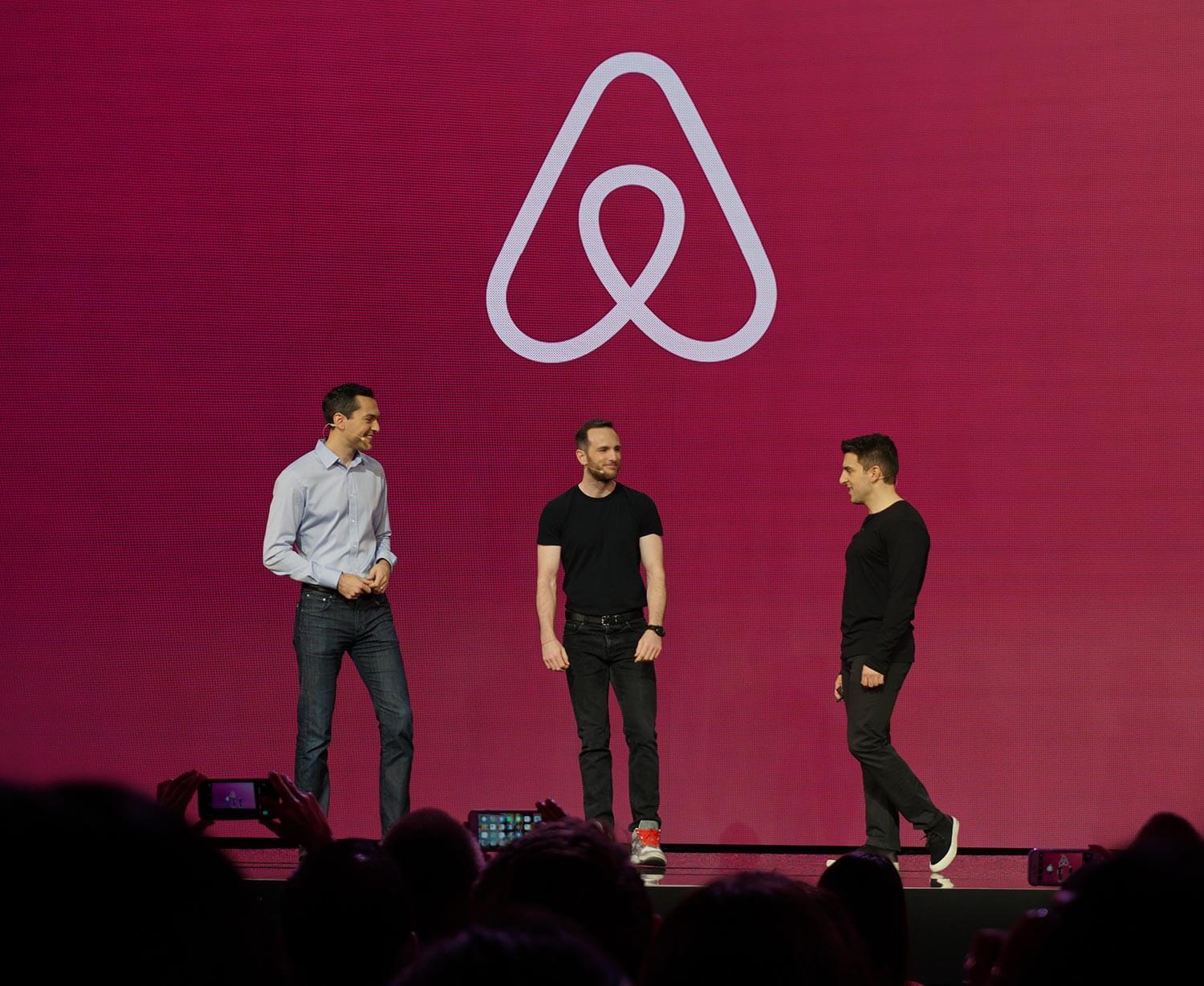 Above: Airbnb cofounders appeared on stage at the company’s host-centric conference on November 17, 2016.

While Airbnb continues to push forward with allowing hosts to monetize their homes with guests, it’s been met with some resistance by the community, namely those who wish for tighter regulations on the company.

In the aftermath of the defeat of San Francisco’s Proposition F in 2015, which would have enacted a short-term rental ban, other efforts have emerged to stem Airbnb’s growth. In fact, this week during the company’s annual conference in Los Angeles, housing advocates protested, alleging that the platform restricts available housing supply. “It’s not home sharing, it’s home stealing, and it has to stop,” James Elmendorf, the deputy director of the Los Angeles Alliance for a New Economy, an advocacy group for hotel and airport workers, told the Los Angeles Times.

And in San Francisco, Airbnb has been rebuked by a district judge who claimed the company has failed to crack down on vacation rentals in private homes. Seemingly under pressure and facing potential stringent regulations from San Francisco’s Board of Supervisors, the company this week did an about face and said it is now ready to police hosts.

Other cities where Airbnb faces issues are New York City, Barcelona, and Paris, although there are likely others.