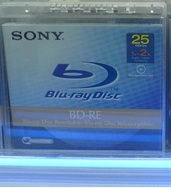 While Sony’s goal of having Blu-ray control 50 percent of the video disc market by the end of this year may be laughable, there are some interesting collaborations going on with the technology that should help its growth.

Blu-ray is an exciting technology that has garnered a lot of buzz recently, but it will need help to rise above the last-generation DVD and ward off the upcoming digital download market.

The first collaboration comes by way of a company called NetBlender which will unveil software that makes it possible to link an iPhone or an iPod Touch with a Blu-ray player, PC World reports. This software, dubbed “BD Touch”, allows users to control their Blu-ray players with the Apple products.

On the surface that may sound a bit boring, but the integration goes much deeper. The company envisions utilizing the connection between the devices to allow users to see on their iPhones or iPod Touches certain special features related to the Blu-ray film they are watching. This could possibly be used to serve up new, interactive advertisements as well.

The real killer feature may be the ability to wirelessly send a digital copy of the Blu-ray film right to your Apple device. Imagine you are in the middle of a movie but need to step out for a bit. What if you could simply hit a button and send a digital version of the film to your iPhone so that you could finish it while on the go. 20th Century Fox has slowly been rolling out discs with Apple-compatible digital copies.

Another tech device set to integrate with Blu-ray is not surprisingly, Sony’s Playstation Portable (PSP) handheld video game device. A new Blu-ray recorder soon to be released in Japan will have an option to transfer content right to the PSP, BetaNews reports. The Blu-ray recorder will also be able to handle transfers to Sony Walkman devices and select mobile phones.

With such features, these new Blu-ray recorders would make for a very attractive media hub.

Its collaborations such as these that will help Blu-ray expand its market share as the technology attempts to take the crown from the DVD format which is losing steam.