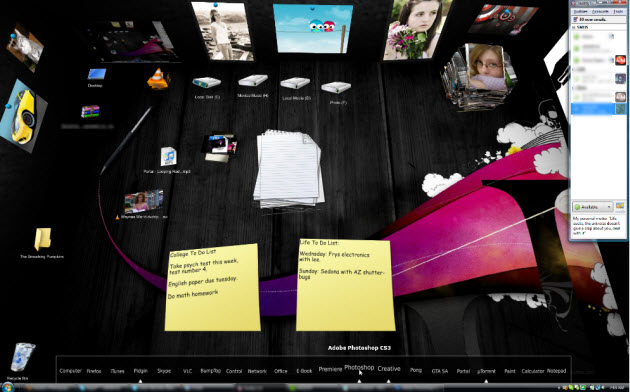 BumpTop has created a user interface that runs atop Windows and makes it easier to view your desktop in three dimensions. So it makes sense that the Toronto, Canada-based company has agreed to bundle its software with the hardware of three leading 3-D graphics card makers.

BumpTop’s free desktop software turns your Windows screen into a 3-D view of an office. You can file things away on the side, post things on your virtual walls, and put various files in piles. You can also pin up photos and create sticky notes for yourself with the premium $29 version of BumpTop 3D desktop.

Graphics card makers HIS, PowerColor and Sapphire will all bundle the BumpTop 3D desktop with their 3-D graphics cards that are shipping to millions of consumers. That will help BumpTop get wide distribution for its software, which must ordinarily be downloaded and installed on top of Windows. In turn, BumpTop will give the graphics vendors a new kind of application beyond games that takes advantage of the latest graphics hardware.

The company also hopes to bundle its software with computer makers who can preinstall it on their computers.

One rival, besides Microsoft itself, is SpaceTime 3D, which created a web browser that could present web pages in 3-D so that you could see more pages at the same time. But SpaceTime 3D isn’t as customizable as BumpTop. Cooliris is a rival with a different perspective on creating a more usable user interface.

Another rival is Jeff Han’s Perceptive Pixel company, which has a futuristic user interface built into touch-screen flat panels. Han’s technology has been showcased on CNN, which used the touch-screen interface to display maps on election night. But the technology is still expensive. Microsoft has its own Surface tabletop touch-controlled user interface, but those machines are also very expensive now.

BumpTop founder Anand Agarawala, 27, started work on BumpTop for his master’s thesis and turned the project into a real company in Toronto in 2007. He presented the idea publicly at the TED conference in early 2007, stirring up a lot of interest. The company’s investors include GrowthWorks, Extreme Venture Partners, and three angels: Andy Hertzfeld, Austin Hill, and G.R. Heffernan Associates. The company has 15 employees and it plans to raise money in the future.