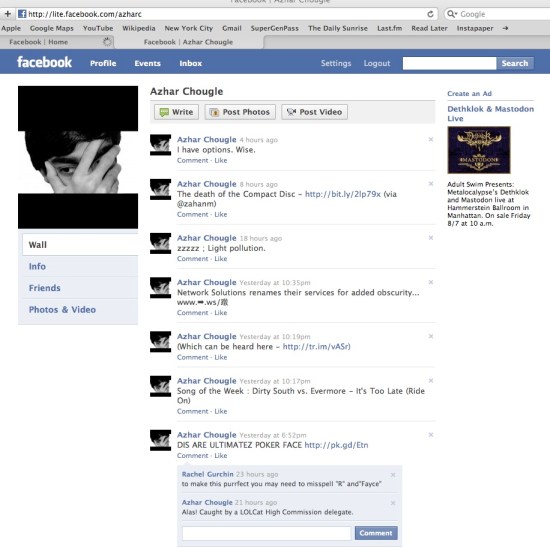 Facebook is testing out a pared-down “Lite” version in an aggressive move to attract more content-sharing. It comes a day after the company launched a real-time search and bought FriendFeed, showing that the company is incredibly focused on moving into the real-time space. The service is in beta testing and invites were sent to specific users. (The photo comes from Twitter and was spotted TechCrunch.)

The Lite version also emulates a bit of Twitter’s spartan look. If Facebook wants to be a social search engine, it can’t let Twitter dominate shared content. It has to be dead-simple for users to share videos, blog posts and comments. Then the company has to collect as much data as possible so that when you do searches, the results highlight timely and relevant activity from your friends and others in the social network.

We are currently testing a simplified alternative to Facebook.com that loads a specific set of features quickly and efficiently. Similar to the Facebook experience you get on your mobile phones, Facebook “Lite” is a fast-loading, simplified version of Facebook that enables people to make comments, accept Friend requests, write on people’s Walls, and look at photos and Status updates.  We are currently testing Facebook Lite in countries where we are seeing lots of new users coming to Facebook for the first time and are looking to start off with a more simple experience.

This evening, the test was temporarily exposed to a larger set of users by mistake.  We have not opened up access to lite.facebook.com to all users at this time.  People who are not part of the test and are trying to access “Lite” will be directed to Facebook.com as usual.

This is a good move: about a year or two ago, I started using the site less frequently because the privacy controls were overwhelming; sharing photos and links was fairly slow compared to other services I was using. If Facebook Lite works out, it may encourage other users to move sharing activity back to Facebook.