Facebook has begun early testing of a feature designed to highlight places where you can access free and public Wi-Fi near you. The social networking company confirmed that its Wi-Fi discovery feature is being rolled out now, though it appears to only be in select countries.

“To help people stay connected to the friends and experiences they care about, we are rolling out a new feature that surfaces open Wi-Fi networks associated with nearby places,” a Facebook spokesperson shared with VentureBeat.

The Next Web’s social media director, Matt Navarra, spotted this in the wild earlier, which suggests it is available for some users right now through the iOS app. To see if you have it, scroll through your menu options to find “Enable Find Wi-Fi.” If it’s there, toggle the setting so it’s turned on, and the app will detect places nearby with an access point. It will not only show you the business offering free Wi-Fi, but also how long it’ll take to get there and the network you can connect to.

Facebook recommends that you give the app permission to access your location history, claiming it’ll “allow Facebook to build a history of precise locations received through your device.” 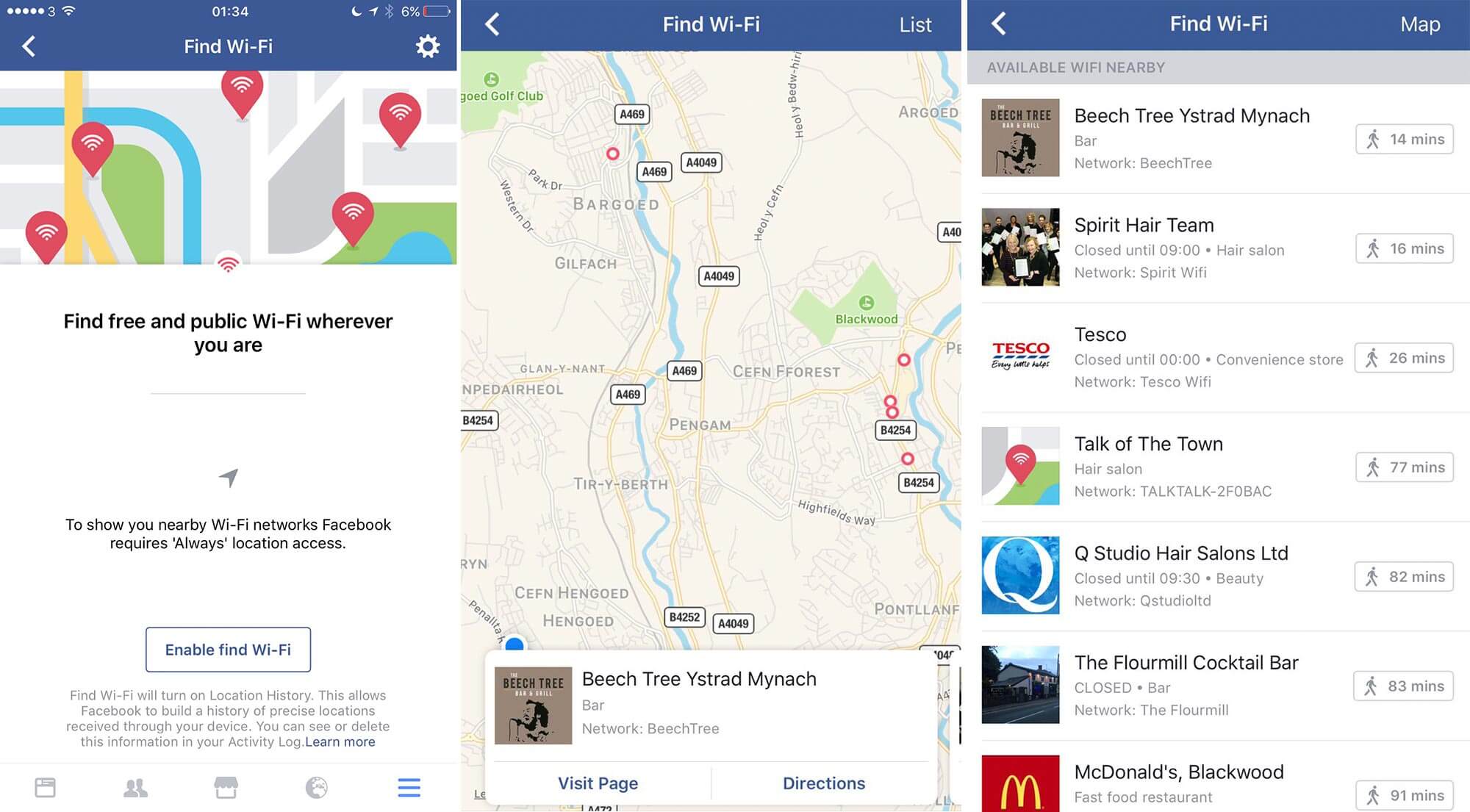 Why the addition of Wi-Fi discovery? The company declined to comment, but it could be useful to those in a variety of situations. Perhaps it’ll be impactful for users in developing countries who face costly data plans and otherwise rely on Facebook Lite. It could also be useful for those who don’t want to incur heavy roaming charges when traveling internationally. Another possibility could be for users who need to upload large files, such as photos or videos, or even to broadcast through Facebook Live.

It’s also worth mentioning that Facebook has previously toyed with the idea of facilitating Wi-Fi access. Two years ago, the company partnered with Cisco in a pilot program in which free internet was available if you checked into a business using the social network. This program sought to motivate businesses to build up their presence on Facebook, while promoting their Page so it could garner more likes and engagement.

The current test Facebook is running could be seen as an extension of that idea, as it showcases businesses that have a social presence and could give them preferential treatment over others that have free Wi-Fi but aren’t as well-to-do as their competitors.

And then there’s the whole targeted advertising thing — getting you to free hotspots around the city could impact the ads that you’re shown within your Facebook experience, selling you on hanging out at more popular local merchants and restaurants.

As a benefit to users, Facebook is listing out the official Wi-Fi network for each featured business, so there’s a lower likelihood (not totally impossible) that you’ll access a spoofed access point. Regardless, it’s prudent to always protect yourself and data when accessing a public network.